A wonderful, comfortable, quiet night at the Hyatt House.  We will definitely stay here next time we sail out of Ft. Lauderdale.

I went down early for breakfast (included).  They had an omelet station so I had the pepper and pesto omelet, which was really good.  The coffee was also very good. Also available at breakfast was oatmeal, various breads, various cereals, and scrambled eggs.  Maybe next time.  Before we left, I took a picture of the pool area from our room. 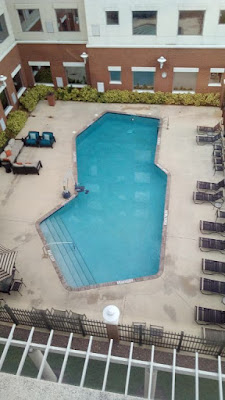 The hotel offered shuttle service to Port Everglades for $12 a person.  We opted for an Uber to the Port, which came to $13.62.  I later tacked on a tip and we still came out way ahead using this transportation.  It was quicker and easier.  Our driver found the Pacific Princess, which was docked at Terminal 2.  The check-in was straightforward and quick (even though I was unable to print boarding passes the night before).  We got our keys and headed up to the Panorama Buffet for a quick lunch.

Got a very nice panoramic shot of Port Everglades after lunch. 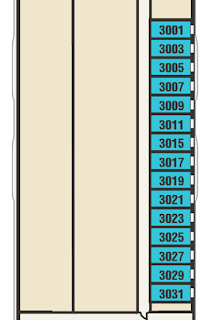 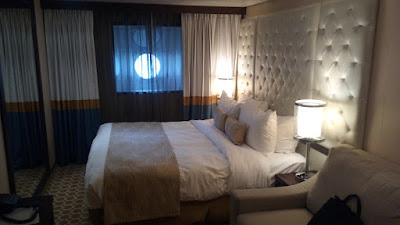 There are only about 10 cabins on Deck 3 all located on the starboard side of the ship.  On this trip, many of the cabins are occupied by contractors.  There are some passengers here as well.

The cabin is terrific – spacious (there’s a couch and two night stands).  The bathroom is nice and there is a lot of storage in the closets and drawers.  The porthole will let in the light that will keep our circadian rhythms honest.  The room looks brand new and it probably is because Pacific Princess has just emerged from dry dock, during the which was essentially refit in total.  It’s a brand new ship and we are the first folks to check it out.  Perhaps the contractors are on board to finalize the refit.

There was no greeting letter from the Cruise Director in my cabin so I went to look for the CD.  The Office is just across the way from the Shorex Office on Deck 4.  There was no one there.

While we were in the Pacific Lounge on Deck 10, Ellen ran into the Deputy Cruise Director, Kim Annette.  Kim came up to the Lounge and went over the talks with me – I would be giving a talk in the Cabaret Lounge on each sea day. So I would be giving all 10 lectures at 11:00 AM with TV replays later in the day.  (NOTE:  On line, the capacity of the Cabaret Lounge is between 340 and 385 people – I’m going to use the lower number for estimating attendance).

I handed her a revised list that put the Titanic Child presentation the day before we arrive in Halifax.  I introduced myself to the Cruise Director, Lynn Van Vorcer, later that evening.  Lynn is an ex-dancer on ships - she is super energetic and very friendly.

We watched the sail away from the open deck.  Off in the distance, the weather was starting to look at bit iffy - most likely, we will be sailing away from it. 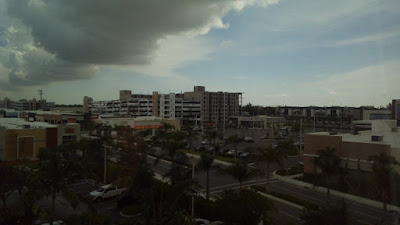 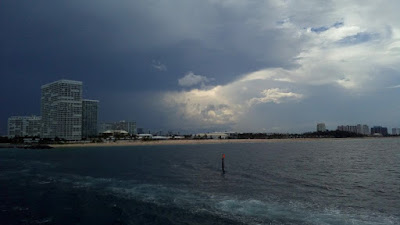 The USCG was keeping an eye on our ship and shooing away any boats that encroached on our space. 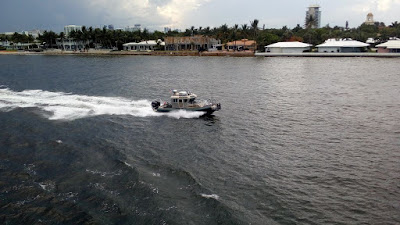 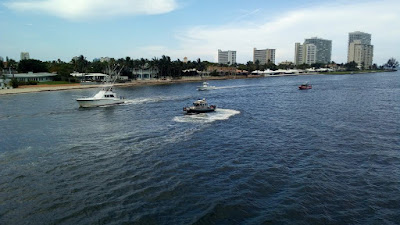 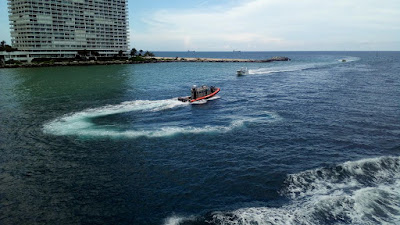 I got some nice iconic ET shots on the deck during our departure. 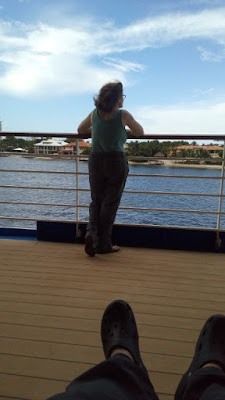 At dinner time, which is very early (5 PM) on this ship, we went to see the Maitre D about getting a seating assignment.  After a little discussion, I told him I was a guest entertainer on the ship and he said he had a table for two.  Table 95 does not have the best location (waiters are flying by from the kitchen) but it does have the best wait staff – Amil and Mariana.  We thought that this was for the evening but this ship has fixed seating (unlike other Princess Ships) – so we are in First Seating at Table 95. Done and done.

We had the Salmon (always available) and I had a Cesar Salad.  They were both OK but it looks like it might be difficult to find something on the menu on a regular basis.

After dinner, we checked out the Piano Man, Randy Heddon.  He is an OK singer but his act is also very zany.  He is entertaining.

The Welcome aboard show featured comedian Tony Daro.  We have seen him before a few time and I knew almost every part of his set.  He didn’t get rib busting laughs but the audience seemed to like him.

The contractors who live in the cabin in front of us (more toward the bow) either had their TV on or were chatting.  They did get quiet around 10 PM so that was not an issue.