We loved this trip so much when we took it in October 2013 that we signed on for another go-round. 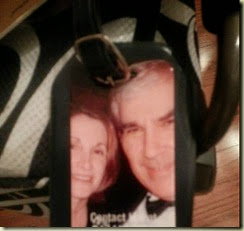 Our Luggage Ready to Go

We have an early flight this morning – 7:30 AM departure – and have arranged for the cab to pick us up at 6:00 AM.  We are anticipating no traffic on Sunday and there is only light rain to deal with.

Our cab is right on time and the trip to the airport takes only 15 minutes so we have plenty of time.  Also, both of us are TSA pre-check so our pass through security is almost instantaneous.  Our plane is at gate H11B and it is still just drizzling. 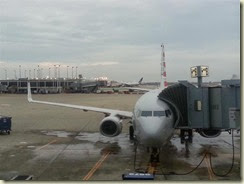 We boarded right on time and this pilot positioned the flaps and slats as soon as the engines spooled up (my preferred option) (usually that happens once the plane starts to roll)  No waiting on the runway and we are off right on time – and that was the last smooth moment of the flight.

This is a 737-800 so Ellen and I are across from each other in exit row 14.  The fellow sitting by the window is not into looking out the window so as soon as the plane took off, he shut the window and didn’t open it again until we were on final approach to SFO.

After a pretty bumpy ascent, the plane leveled off in the soup at 37000 feet.  The pilot came on and said we were going to be flying between two weather systems and the unstable air was going to make this a bumpy flight.  Once past the Missouri River, things should smooth out a bit – otherwise, he was going to keep us in our seats until then.  At one point, he told the flight attendants to take their seats (not a good sign) and the beverage cart didn’t come down the aisle until about two hours into the 4.5 hour flight.

I did try to make a run for the bathroom about an hour into the flight but once in the washroom changed my mind because I was being tossed from wall to wall.  I tried two more times to make a washroom run with minimum success – just getting back to my seat was an adventure.  I could see through the other window that we were above the cloud tops but that didn’t seem to help the ride.

At one point, I felt the plane decelerate a bit and reduce altitude – things smoothed out – the seat belt light went out – and I headed for the washroom.  As soon as I got in there, the chop restarted and the light went back on.  My fault, I guess.

Well, needless to say, it was a flight demanding good self control – we only had about 10 minutes of smooth air total.  Once in California and on initial approach, things got calmer but then the seat belt light came on as we began our descent.  The pilot apologized for the “A” Ride but after looking at the radar post flight, I saw what he was dealing with.  Thank goodness, the rivets on the plane were tight.

We took the Airport Express Shuttle to the Travelodge on Columbus at Fisherman’s Wharf (still haven’t changed the shocks) ($18/person – I think we added a buck to the quoted price so I reduced his tip by like amount).  It was too early to check in so we left our bags at the desk and took a little walk – I took the opportunity to buy some sourdough bread to snack on.

We called our friends, Mark and Celia, who had driven in from Napa to have lunch with us.  We had set this up a few weeks ago and we were looking forward to getting together.

We went to a great place called Liverpool Lil’s, where I had the Fish and Chips and Ellen had the Veggie Omelet – the food was excellent and it was good to catch up with Mark and Celia (we saw them last in 2009 on the Pacific Princess). 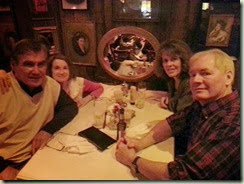 Lunch with Mark and Celia

They took us back to the hotel, where, at about 3 PM, we checked in.  We are in Room 102 – close to the Lobby and no stairs to climb but we do have heavy footed neighbors to the north of us.  We walked across the street to the Walgreen’s to get some water and other items for the trip.

We were pretty tired after the long day so we spent the evening reading and relaxing in our room.  While the room was pretty noisy during the early evening by 10 PM, things got quiet.

Hope to get some sleep.