As Crystal Gayle used to sing, “Three o’clock in the morning and I couldn’t get to sleep at all…”

Another bumpy night as the ship is bucking a significant headwind.  One of those multi-shudder bumps woke me up and that was it for the night.  The seas didn't look that bad from Deck 7.  Not a cloud in the sky but it is cold out there. 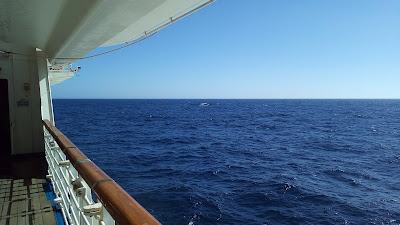 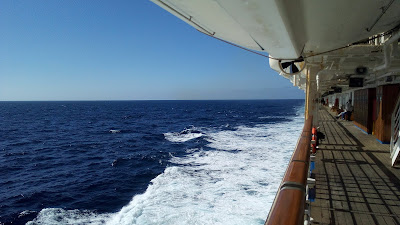 I carried my tired self up to Horizon Court for my usual breakfast.  It’s a good thing I don’t have to work these last two sea days (a very unusual situation on this itinerary) because I am pretty tired from sleep deprivation.  The breakfast, was, as usual, good and the coffee was pretty hot this morning.  The ambience was not that inviting – I had to eat inside because it was chilly and there were very few people in the buffet at 7 AM.  So, there was an excess of servers and, having little else to do, the servers and suits were into chatting.  So chatting and Mexican music in the background made for a less than peaceful breakfast.

I had my usual iced decaf (they know me now as “skinny boy” because I have my latte with non-fat milk) in the Pizzeria.  I was updating my upcoming Mexico series with changes made to the Hawaii talks (to keep them in the time requirement and remove any confusion) – I also had to move any references on the slides up a bit so they would not be cut off when projected.  The AV works very well on this ship but the slides are cut off just a bit on the bottom.

We were planning to go to the Pub Lunch today but instead went back to the cabin to rest up a bit.  Lunch eventually was a combination of tuna salad sandwiches and Greek Salad (International Café) and items off the Horizon Court buffet.  A nice neat lunch which included my first French Fries of this cruise.

We went up to One5 on Deck 15 to read because the couches on 15 Aft were not open to passengers today – don’t know why but crime scene tape kept people away.  Here's the view from One5. 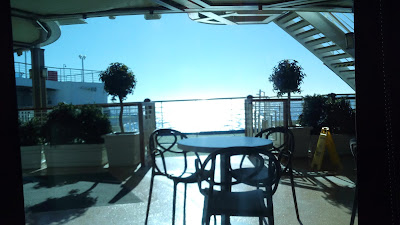 Besides, it was probably too cold up there.

At 3:30 PM, I met with that passenger who owns a radio station in Champagne IL for an interview on my work on the ship. 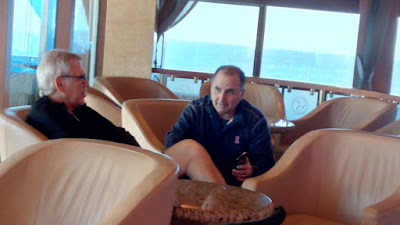 The interview was only a few minutes but he asked some good questions and I answered as best as I could.  It was fun.  He’ll email the sound file to me and the show will air next week.  That was a first.

After another four days at sea, I was able to spot the coast of Mexico from the Starboard Deck. 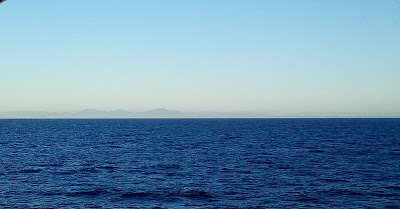 I’ll bet people were glad to see any land at all.

We had dinner in the Michelangelo Dining Room – I have been making reservations every morning at 8:00 AM so we don’t have to stand in line.  We got a huge table for four just for us – it was good for all of the food we would order but you had to shout to be heard.  Tonight, I had the Panko/Macadamia coated Mahi-Mahi (very good) (I did not like the mushroom side).  We both had the Cheese Stuffed Ravioli in Walnut Cream Sauce (also good). Completing the dinner was a Cesar Salad, Baked Potato Soup, Watermelon in Mascarpone Cheese, ice cream sundae with chocolate brownie ice cream and a grilled banana tart (so so).  A good dinner overall.

The ship arrived in Ensenada, Mexico at 7:00 PM 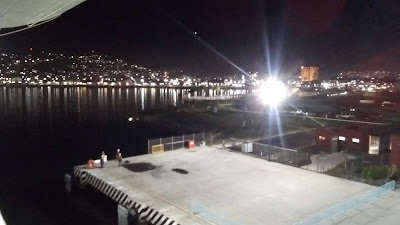 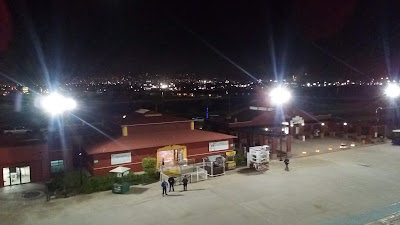 and based on the time we had here (about two hours), we decided not to get off – besides it was cold and dark.  Normally, we would have four hours here, while the Jones paperwork is filled out, and it would be warm and we would head for the main street – not today.  I did get a picture of the Moon over Ensenada. 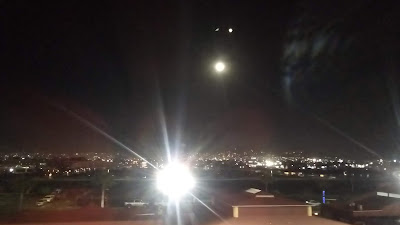 We found seats on Deck 7 and I finished “Memory Man”.  This was probably one of the best books I have read in years.  I am hoping that Amos Decker becomes a series by David Baldacci because he is unlike any detective I’ve come across.  I’ll have to check out some other books by this author.

There is no show tonight so we are back in the room around 9:00 PM.  The bow thrusters fired up and we were soon pushing away from the pier and headed to San Francisco.

The seas seem to be smooth so far.