Not a lot of sleep last night – don’t think it was a result of concern over the weather tomorrow and our flight to Los Angeles.  Who knows?

AA1063 is scheduled to depart at 9:15 AM – working back from there and factoring in a messy morning, I scheduled our cab for 6:45 AM.  At 5:30 AM, there was no snow even though the radar indicated we should be seeing something.  The cab was right on time and 15 minutes later, we were at the airport.  Today, we are both TSA pre-check,  which should shorten our transit through security.  That did go quickly and now we are at Gate K13 waiting for our plane to arrive – we are scheduled to board in 30 minutes.  Our 9:15 AM Push is in jeopardy. 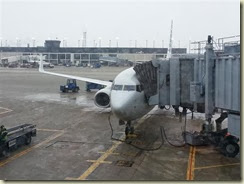 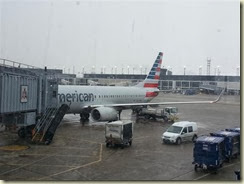 AA1063 Being Readied for Departure

When we first got to the airport, the planes were not being de-iced; now with the snow falling and the temp around 20F, a squadron of de-icing trucks was dispatched to the K gates to service the planes.  Our truck is shown below. 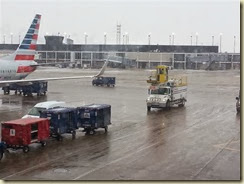 Our plane was turned around very quickly at around 9:10 AM or so, the boarding process began.  Everyone got on pretty quickly and the AC was turned off so the plane could be deiced – the yellow ethylene glycol solution covered the entire plane including the windows and we were ready to go.  We took off just a few minutes late and ahead of the snowstorm.

A rather smooth climbout – the de-icing liquid was quickly cleaned off by the speed of the plane and soon we were above the clouds. 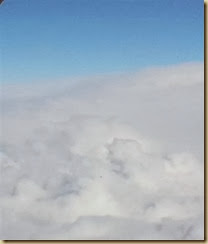 Before takeoff, the Captain said he expected a smooth flight to LA – couldn’t be more mistaken.  Low level chop – not headache inducing but annoying – followed us all the way to LA (the seat belt sign was lit the whole time and the flight attendants were asked to take their seats at one time).  We enjoyed our bagels, lox, and cream cheese mini-bagels (Ellen makes them best) while others paid for their breakfast boxes.

I used my new Sony Noise Canceling Headphones, which replaced the ones I donated to another passenger or employee on my last United Flight.  The new ones are better and more comfortable so let’s call it an unplanned upgrade.

About 3:30 hours later, we were on initial approach to LAX, flying through the mountain corridor – the picture below is not out of focus – there was a lot of “fog” in LA today. 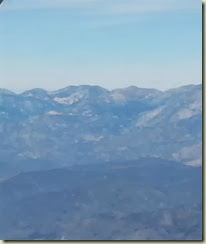 Our bags were one of the first to come off Carousel 2 – BTW – Flight 1063 was code-shared by four other airlines – the future of air travel.

We were picked up by my brother, Sid, and sister, Nalsey.  From the airport, we drove to the cemetery in East LA to visit our parent’s graves.  From there, we went to the iconic Canter’s Restaurant on Fairfax avenue for a sandwich (today would be four meal day).  I haven’t been to Canters in 30 years or so.  Still the same.

We spent the afternoon at Nalsey’s House chatting – we had a lovely Italian dinner delivered from a nice neighborhood restaurant.  When we finally ran out of steam (we had been up since about 5 AM our time), my brother drove us to our hotel in San Pedro.

We checked into the Best Western Plus Hotel on Gaffey Street.  The place looked brand new and it might have been the nicest hotel we have stayed in in a while.  The Cruise Port shuttles were full for tomorrow so the clerk gave us a discount on our room to make up for our needing to take a taxi to the port. 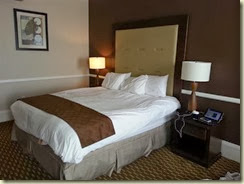 The room had high ceilings, crown molding, nice finishings, etc.  Only drawback – it was on a major busy street – street noise was constant – earplugs needed.