Another early morning as "Identifying America's Fallen Heroes" starts at 9:15 AM.

I was up at the Oceanview Café before it opened and once again, I was able to reach over the ropes and grab a pancake.  Along with cottage cheese and the fixings, that made for a good breakfast.

I got to the theater about 8:50 AM and there was just one guest seated.  At the start of the talk, there were only about 40 plus folks in the audience – it was either too early for some folks or people were going by the app and will show up at 12:30 PM for my non-existent lecture.  In any event, a disappointing finish to the second cruise lecture series.


This would be my last chance to grab some herring up in the Oceanview Café, so Ellen and I went up there to grab Breakfast #2.


We found a “quiet” area in Eden – overlooking the aft end of the ship and were able to do some reading.


Lunch today was in the Eden Café – Salad Bowl with beets and blue cheese, a tuna sandwich on their freshly cut bread, and a slice of banana bread. We found a nice table around the corner from the café and had a relatively quiet lunch.


We tried the seats outside the Eden Café – it was the smoking side but the prevailing winds were favorable.  Eventually, the smoke got to Ellen and she retreated to the room.  I stayed there and for the next three hours, I finished “Past Tense”.  It was a bit slow on the pickup but once it got rolling, it had some interesting concepts and some pretty good punch-outs.  The bad guys, and there were a lot of them, all got it, as they usually do, in the end and in creative ways.  I also learned some new stuff about Reacher’s background.


Our dinner reservations tonight are in the Cyprus Restaurant.  We were hoping for the really good mushroom appetizers on the vegetarian menu but they weren’t available tonight.  We both tried the Tuscan Minestrone and it was good but it wasn’t minestrone.  I had a pretty ordinary enchilada with cheese and peppers.


While we were eating those, one of the headwaiters told us that she could not locate our special meals – we gave her the details on where we ordered it and she continued her search. Eventually, the meals were located.  The two steaks were quite different – Ellen’s was melt in your mouth soft and mine was difficult to cut with the steak knife and just as difficult to chew.  The fries were perfect and the two desserts showed up and they were pretty good.  We’ll have to ask if these kinds of special dishes are available on the Reflection in February.


We are not going to the final show – “Colors of Life’ – because, while it is a beautiful show visually, the thunderous orchestra and singers make it, at least for us, unwatchable.


We listened to a few minutes of Danny Smart do his take of “Eagles” hits but his singing style just didn’t fit with the easy listening Eagles harmonies.  We were also treated to an extended and entertaining acrobatic set by the Eden aerialists.  All I kept thinking through the act was that the floor was hard and a fall would really hurt. 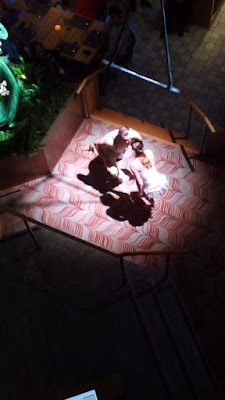 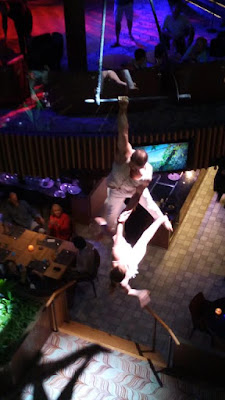 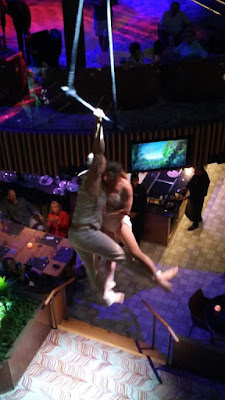 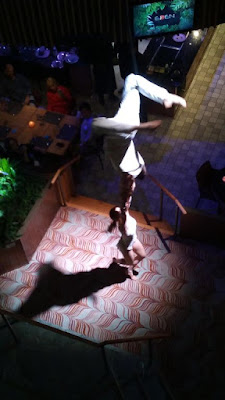 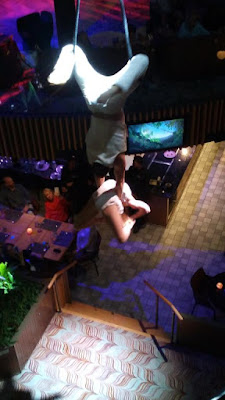 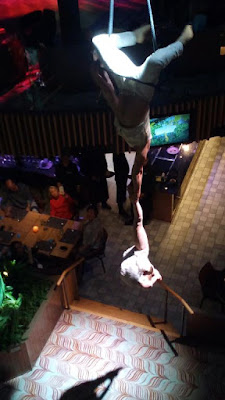 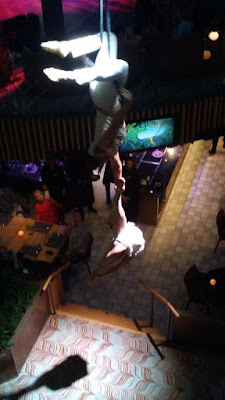 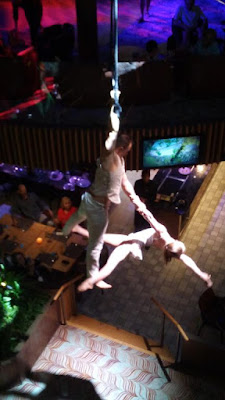 We also listened to one of their highly unusual singers. 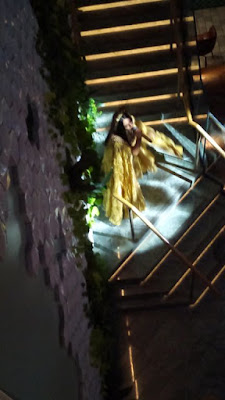 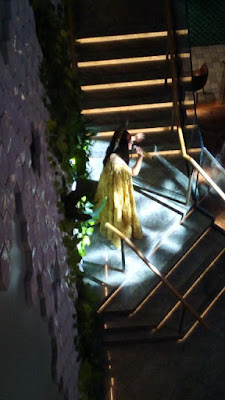 We went back to the room to finalize our packing and settle down.