We are back in Port Everglades after 15 warm, smooth, but noisy days in the Caribbean.

The ship arrived in port before dawn and I was there to capture the moment. 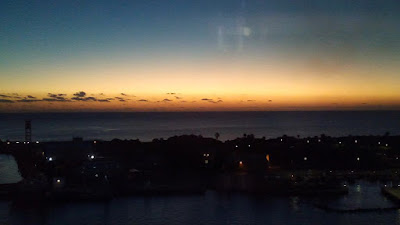 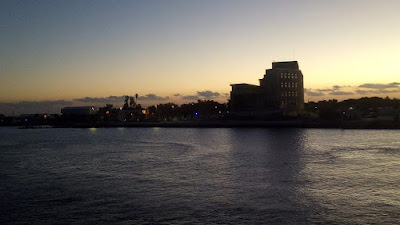 I was in the Oceanview Café at 6:00 AM for breakfast – everything was available but just didn’t taste as good as on previous days.  I brought Ellen some breakfast and around 8:00 AM, we headed for the gangway on Deck 5.


We walked off and did not go through Immigration – instead we passed through facial recognition scanners who identified us through scans taken when we boarded.  There were no Border Control Personnel present.  It saved a ton of time and waiting.  The process was streamlined and cool.


The time gained during disembarkation was lost when we tried to get transportation to FLL – one first attempt involved a van that charged $11 pp (compared to $15.95 pp using ship shuttles).  The driver said he was leaving in two minutes – I told him that the last time we were in this situation, it took about an hour to get going because the van was waiting for some prepaid passengers.  We waiting a few minutes more and no other passengers were coming and they needed a third to get rolling.  I couldn’t get him to go so we got our bags and used a taxi.  Our cabbie charged us $20 (we gave him a $5 tip) for what was about a 10 minute trip.  He dropped us at United for our 12:38 PM Flight on UA1728.


We went through the same BS about the checked bag that we did on the way here but, this time, the agent was very unsympathetic and charged me $30 for the bag.


We are now in the United Club – very close to our gate – C3 – having a second breakfast and drinking diet cokes.  This is not the best United Club we've been in but we did find a relatively quiet place to eat our snacks and then some comfy couches (with plugs) to hang out on until our flight.

When we got to the gate, our plane was just pulling in from its previous flight. 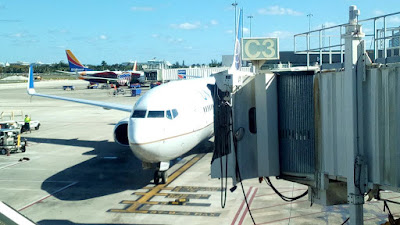 We had Priority Boarding and lined up earlier this time so I would have a fighting chance to get an overhead bin for my carryon bag.  We boarded on time and our seats were great (20C and 20D on this 737-800).  The flight departed on time and we ate the food we have commandeered from the ship.  It was a smooth flight and we landed pretty much on time.

Our huge bag showed up on the carousel quickly and, after, a short wait we caught our taxi for our ride home.

The ship was beautiful and the food was good but there was simply no quiet place to go to read and chill out.  The next time we go on this ship we will need to be prepared for the amped up ambience.
Posted by Hal T at 11:48 AM