Another toss and turn night – no idea what is causing this – smooth seas – quiet room – nice bed.  Just not meant to be.


Breakfast in Oceanview Café – I expected a lot more people up there since we are in port.  I was up there before the sun came up – already docked was the NCL Pearl. Reagent Seven Seas Explorer (Pac Princess type ship) was holding a few hundred yards out – I thought it might be tendering but I don’t think there’s a tender port.  It started moving so it was waiting for seas or wind to calm down. 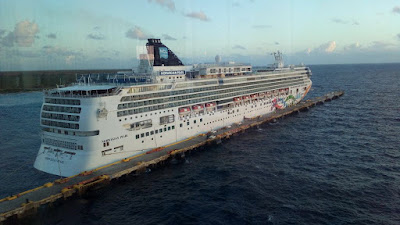 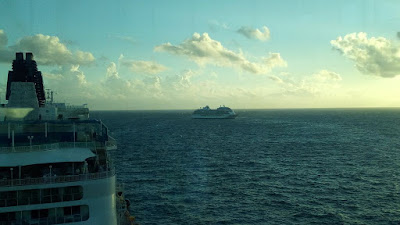 Good breakfast – waffles were there when I needed them – cottage cheese, sour cream, and jams filled out the item along with some scrambled eggs.  I got all the items but my last cup of coffee.  A view of the sunrise over the Gulf of Mexico was a bonus. 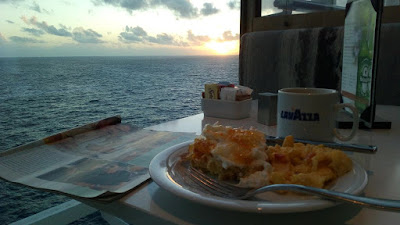 
We walked off the ship on a never-ending pier (the longest in our experience and with no trolley for mobility challenged persons) to the terminal complex. 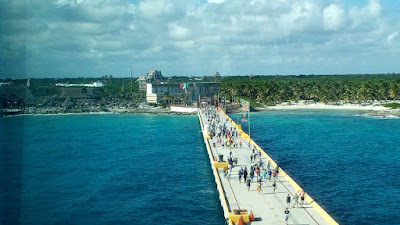 The complex has grown every time we visit and it is becoming more and more difficult to navigate the various buildings and streets.  Besides, there are a lot of ships here today – besides us there is the NCL Pearl, the Harmony OTS, and Regent Seven Seas Explorer.  The Harmony OTS is contributing about 6,000 plus people to the crowd. 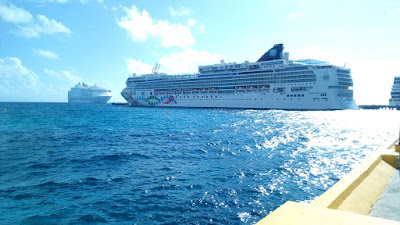 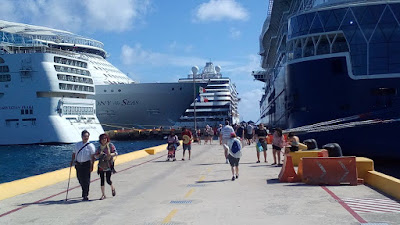 Our goal is to find transport to Mahahual, a little town about 10 minutes away.


It was a pain to find the back exit of the sprawling complex - it's a crazy radial maze of stores.  Breaking up the pattern was a shallow pool occupied by several flamingoes. 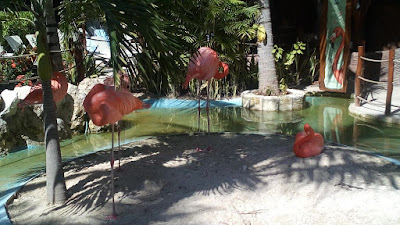 We eventually saw signage for taxis and exited the complex.  We took the trolley ($8 pp one way) – the trolley carries around 25 and is towed by a truck.  The ride is OK as the driver is very good about dealing with the many speed bumps along the way.  There is some construction going on but much of the area between Costa Maya and Mahahual is just jungle and empty lots.


The city itself consists of two major streets – the trolley let us off on the only real street – replete with bars and some shops.  One block to the east takes you to the Malecon.  The Malecon is home to bars, shops, and beach massage, which looks to be the main local industry.  As you walk along the multi-block Malecon (which is in good shape), you are met by reps from the various massage groups.  The price is all the same - $20 per hour – so you pick by instinct.  After being told that no traditional spas exist nearby (which they do but we didn’t want to spend the time looking), we both decided to give the beach massage a try.  The girls are all done up in matching t-shirts with the massage group on the front and their name on the back.  They don’t speak the best English but they are friendly.  Our massages were very good – I was skeptical but I was happy with the session.  It’s a clothes on massage with only your shirt coming off.  The technique was good and relaxing especially with the sea breeze wafting over you during the whole thing.


We gave the girls each a $5 tip and found a seat at the nearby beach “club”.  I ordered a Modelo and a Coke Light and the bill came to $9 (who knows how they set the prices). 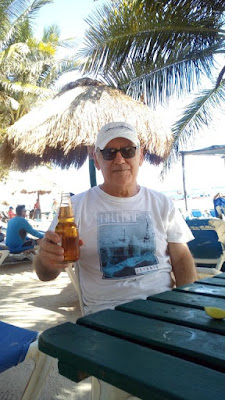 No matter, we had a great view of the Caribbean and it was shady and cool.  I went down to the beach to take some pictures - got a great one of the Edge docked along with the other ships. 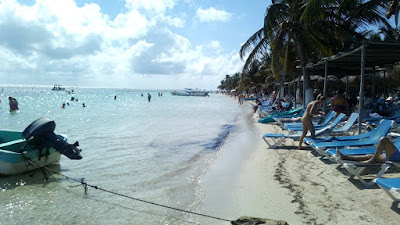 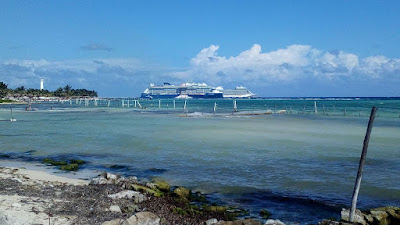 The place had WiFi but we also had phone service.  We spent about an hour sitting and relaxing before checking out a few of the shops for trinkets.


The trolleys do not do a return trip so the way back is by taxi, which ran $8 today – I believe that price is set and has been different in the past.


We found our way out of the Costa Maya complex and made the long trek back to the ship.


Lunch in the Oceanview Café today was pizza and salad, which was just right.


We tried to sit out on Deck 15 but the music was really blaring so we went to Eden for a while and then to the room to get ready for our dinner.


(NOTE: By accident when checking out the menu earlier in the day, we noticed a spreadsheet that listed a kosher ribeye meal for a passenger.  We checked with someone in the restaurant and they told us that kosher meals were available but they were mostly the pre-packaged airline meals.  However, two meals are prepared fresh – chicken breasts and ribeye steaks.  We are going to check with the staff tonight at dinner about ordering these meals.)


Tonight’s dinner is special and tied into the “Moveable Feast” theme of this cruise.  We are in the Cyprus Restaurant and there are four dishes prepared by Gail and Marcus, the celebrity chefs.  I tried the Halibut with Cajun and Japanese spices on a plate of all sorts of veggies.  It was very spicy but good, once you got past the heat.  Ellen focused on the appetizer and also had the Australian Sea Bass (which she liked).  We tried the special desserts – Chocolate Yuzi (superrich combo of pudding and yogurt) and an Apple Upside Down Cake (not as good).  When we finished dinner, we caught one of the “suits” and ordered two ribeye dinners for tomorrow night – he wrote it down in his magic pad and so it will be).


From dinner, we tried to find some quiet in the Grand Plaza with the Nauticals.  That lasted until the show let out and the bartender started their juggling show. The noise was deafening so we both escaped to the room for the night.  The noise has finally become too much to deal with.


Seas are smooth and Edge is just coasting at 9 knots to Cozumel.
Posted by Hal T at 10:18 AM