A picture perfect day in Maui.

We both have to be in the Princess Theater at 7:00 AM to assist in the dispatch of passengers on excursions – this is earlier than usual because this is a tender port, which adds to the lead time for excursions.

I beat my wake up call of 5:30 AM so I both tried to cancel the call and I unplugged the phone.  The sun was just rising. 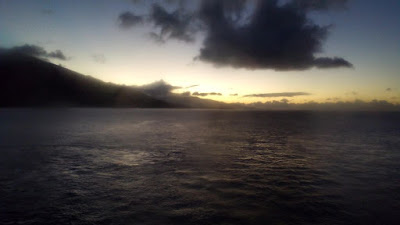 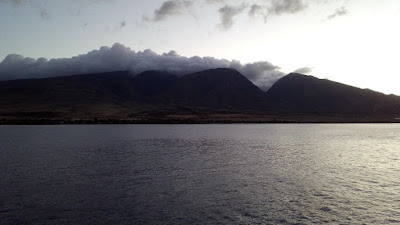 At 5:30 AM, I was in Horizon Court.  One of the staff volunteered to make me a waffle and I was able to access the cottage cheese and other items, including a biscuit.  I had a nice quiet breakfast in the Solarium and was back to the room by 5:55 AM.  Ellen had already received her room service breakfast and I brought her some additional goodies.

We were both in the theater on time and seated passengers until 8:00 AM, when we joined our group going to the tender pontoon.  The tender was there and the ride was both smooth and short. 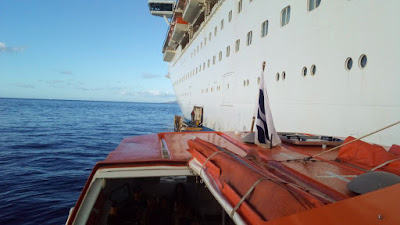 I did get a good shot of Maui from the tender. 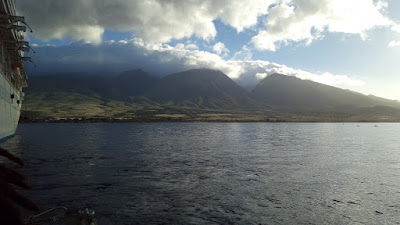 We found our bus and took our seats in the back of the large bus.

Our tour – “Maui Tropical Plantation and Maui Ocean Center” – left on time and headed Southeast down Highway 30 (Lahaina is on the Western coast of Maui). 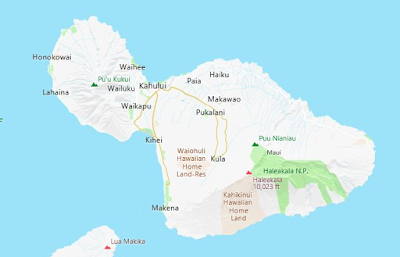 The mountains were on the left and the Pacific Ocean on the right.  About 30 minutes later, we pulled into the Maui Tropical Plantation complex.  From 9-10 AM, we had free time to shop at the “Made in Maui Country Store” or check out the outbuildings. 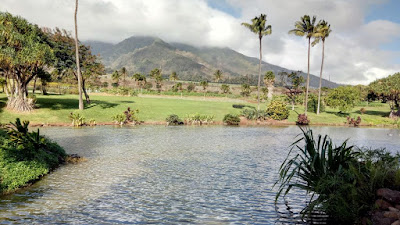 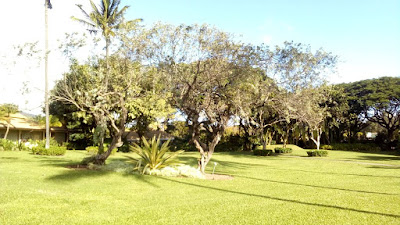 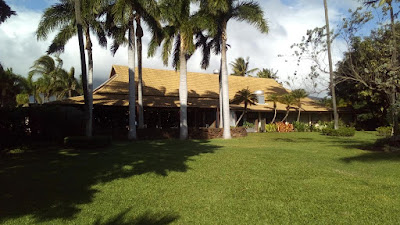 I wound up trying a 20 oz. coffee at the Coffee Shop for $4.00.  It’s a little humorous that the coffee served was only 10 percent local coffee and 90 percent Central American, South American, and Indonesian Coffee.  In any event, I had it iced and it was pretty good – as good as the pure Kona and Kauai coffees I had earlier in the cruise. 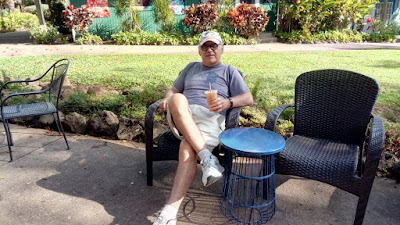 The Plantation used to be a sugar plantation and some of the machinery and other industrial pieces have been repurposed as art installations around the buildings. 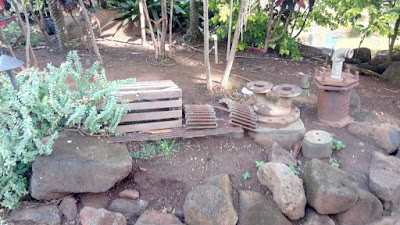 One of the most interesting is an installation composed of massive gears used at one time to turn equipment to make sugar syrup and sugar. 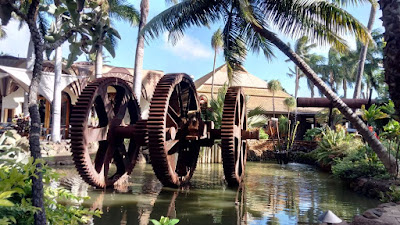 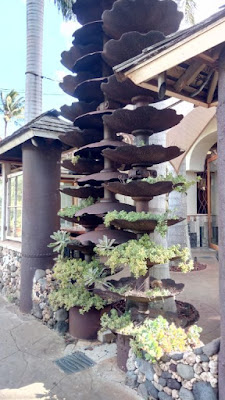 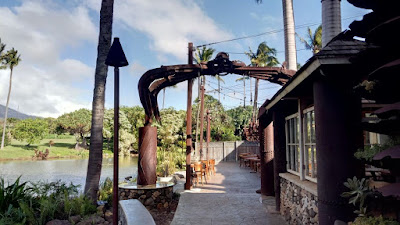 There is also a small lake inhabited by several types of water birds.  It’s definitely a photo op type of place. 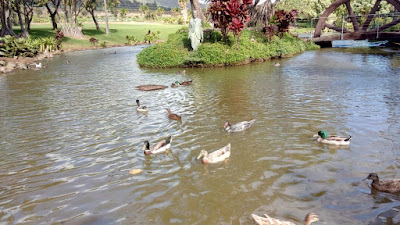 At 10:00 AM, we boarded a tram and took an hour tour of the grounds – the narrator, a young woman, did a nice job of explaining the various plants on the grounds (they were labeled as well).  One of the plants was Red Ginger. 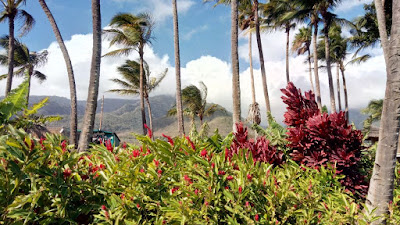 We also saw banana trees (I recognized them) and all types of tropical flowers.  The views of the mountains were also spectacular. 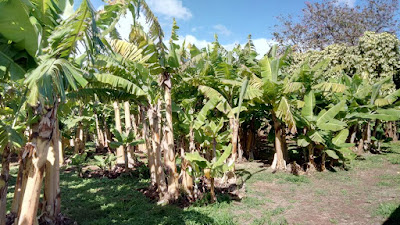 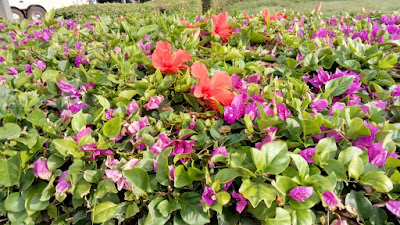 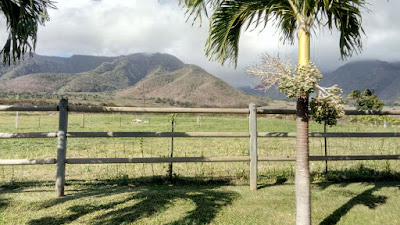 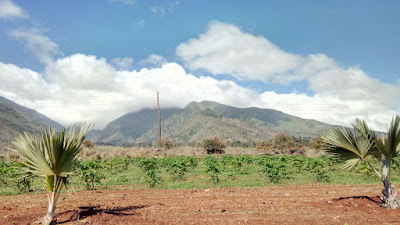 The tour was interesting and relaxing. When we finished, we were offered a complementary cup of Maui Gold Pineapples.  The pineapples were good but I just couldn’t finish the big cup.

Our final stop was the Maui Ocean Center.  On the way there, we could see Haleakala, the impressive volcano we've visited on earlier trips. 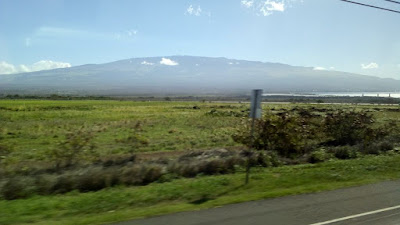 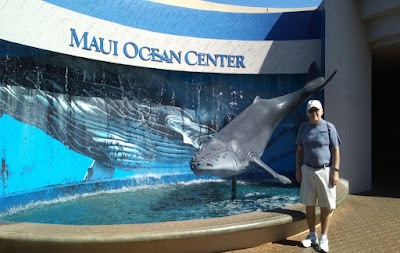 We’ve been here before and I recall that it was an interesting visit.  It was this time, also. We spent more of our time checking out the coral (actual living coral in an aquarium setting) and the fish aquarium.  Lots of sharks, tuna, amberjack, rays, various smaller fish, and, of course, bioluminescent jellyfish. 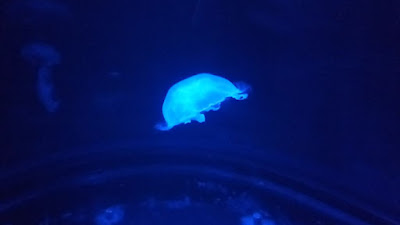 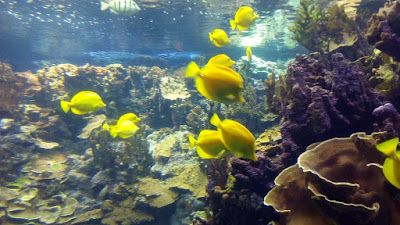 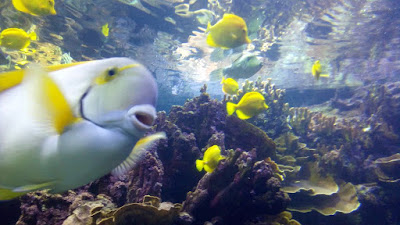 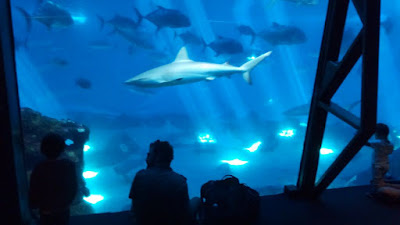 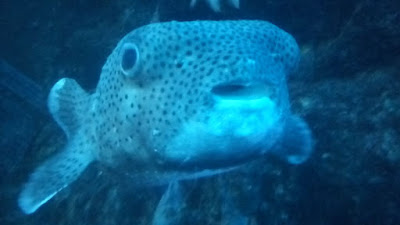 We didn’t see the fish feeding today but seeing the fish swim over our heads was still fun.

At 1:00 PM, we started back to Lahaina on highway 30, which afforded a view of the Grand Princess at anchor, as well as the island of Lanai. 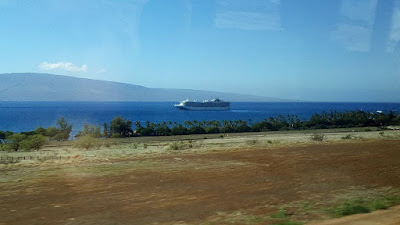 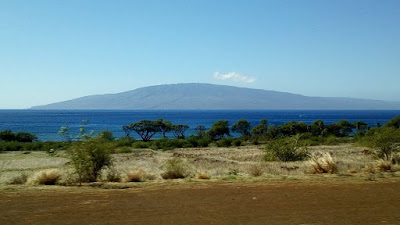 We arrived at the Tender Port about 15 minutes later than expected.  We were able to get on a tender right away and were back on the ship a short time later.  We were hungry so we went straight to Horizon Court where salads, pizza, fish, and assorted other items sufficed as a late lunch.

The view of Maui and Lahaina from the ship was fantastic - I also got a panoramic shot of the island. 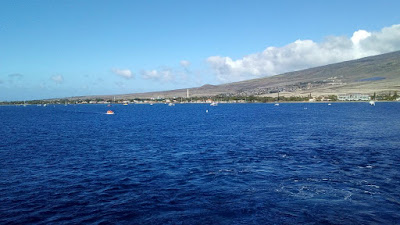 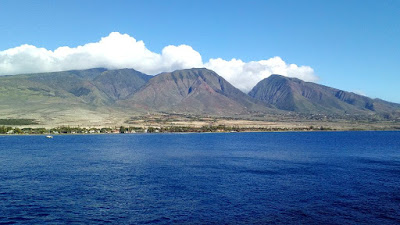 In the room now resting up – we are both tired.

We got a bit of a late start for dinner so when we showed up at the Michelangelo Dining Room (we had already eliminated Horizon Court for tonight), there was a huge line.  The seating process is very slow on this ship as the Maitre D escorts each guest to their table then returns and fetches the next group in line (other ships have several staff showing people to their tables).  Instead of waiting, we went to Alfredo’s Pizzeria.  Along with some Baked Potato Soup and Caprese Salad, I had my usual Vegetariana Pizza.  I still haven’t been able to clearly explain the concept of extra sauce (it always comes as a topping instead of a base) so next time, I will speak to the pizza chef directly.  The pizzas were OK.

It was too late to see “Handsome Jack”, the magician (not a big fan of magicians anyway), so we found seats outside the Explorers Lounge, where we took in a set by Supersonics and then listened to a game show.  I am making progress on “Unseen” and am finding it interesting that Karin Slaughter has done a crossover with her two protagonists, Sara Linton and Will Trent.  The author uses a bang-bang style of dialogue and it’s difficult to follow but so far, the book is interesting.

Checking out tomorrow’s Patter, I found out that I have been moved from the afternoon to the “coveted” 9:00 AM slot in the Princess Theater.

The seas are starting to get a little testy as we make our way to the cabin for the night.