Of course, I slept poorly as I was anticipating the Room Service person to rap on the door anytime.  I finally got up for good at around 6:00 AM to get ready.  At 6:15 AM, I changed my mind about room service and called to cancel my order.  I went to the Oceanview Café at 6:30 AM, before the sun came up 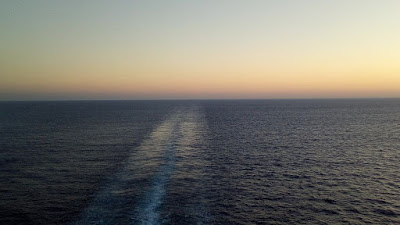 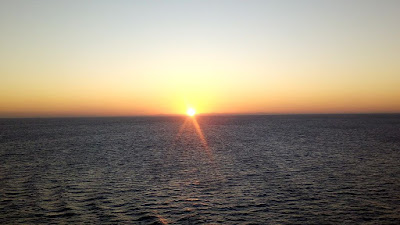 for the Early Riser’s Breakfast.  As it turned out, there were pancakes out there – I reached over the strap meant to keep people away and grabbed a large plain pancake.  The cottage cheese and sour cream were open and that’s really all I needed.  I was finished at 7:15 AM and back in the room.

I was still early (and Ellen was still sleeping) so I went to the Aqua Spa Café to get some coffee and also water for later.  A man spotted my computer and asked if I was going to give the talk this morning. I said yes and he sat at the next table with his wife (I think). I noticed that they both were drinking the green health drink and I had to ask them if they liked it – they said yes and were ready to let me taste it.  Well, of course I declined, then Ann (I think) said she would treat me to one as she had a drink card. I told her that wasn’t necessary but she ran off and got me a drink in a to go cup.  I think this drink was made from kale, cucumbers , and a citrus fruit of some kind.  I was surprised that it actually tasted pretty good.  I took the rest of the drink with me to the theater.

The first talk on this cruise will be “Forensic Detectives: The Search for the Unknown Titanic Child”.  When I got to the theater at around 8:50 AM, there were about four people sitting down.  A few more folks came in and by the time I started there was a respectable crowd of about 70 plus.  I was introduced by Sarah and got started a little late (and finished a little late). 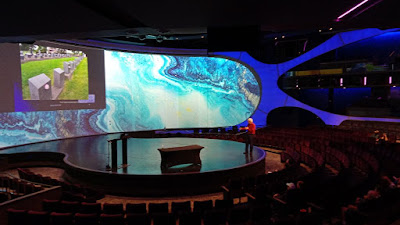 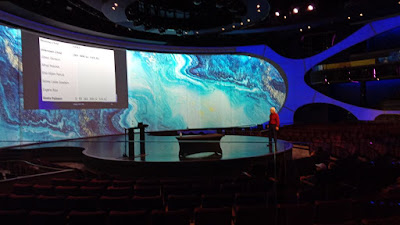 I hustled off the stage so the Destination Speaker (crew member) could get set up.  I liked my pace and delivery this time round and I don’t know why the talk went long.  I talked with some guests afterwards and they had very positive things to say about the talk.


Instead of lunch today, we are going to have brunch in the Oceanview Café.  As we were making our way aft, the meet and greet with the chefs was just wrapping up.  Ellen was able to get an iconic photo with our two celebrities, Gail and Marcus. 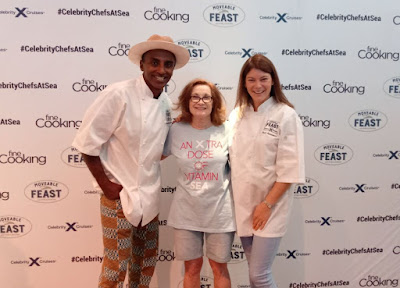 Captain Kate showed up to participate we got a photo of the three of us.

I had herring and eggs and a waffle and Ellen tried all sorts of goodies.


We sat for a while in the Solarium, then moved to Deck 15, where we could be outside and see the water.  Those seats were terrific because they were far enough away from the music - one deck below - that one could read comfortably.  When the sun peaked over the top of the ship, we retreated across the walkway to the covered lounges.  These were also very comfortable and away from the beat.  I finished “Born a Crime” – when I was ready to return it to the library, I noticed that what I had read was the YA version of the book – I’m sure it doesn’t matter and I’m certainly not going to read the real version at this point.

It's a beautiful day and the pool deck is packed. 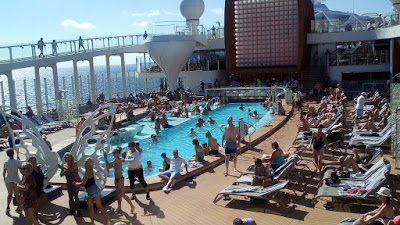 Our bathroom has developed a problem.  The shower water drains via a grated channel that runs behind the toilet before it goes to the big waste water container.  The channel is also used to catch the water when the bathrooms are fully cleaned.  Our channel has developed a blockage downstream so the shower water exits the channel behind the toilet and onto the bathroom floor.  Maintenance has been called twice and we’ll check out their work tomorrow.


Derrick Cameron, the comedian, is the headliner tonight.  Instead, we went to The Club and listened to dance music (not super loud).  We stayed for The Challenge Game Show – a rip off of Jeopardy.  And our evening finished off with Boogie Down Broadway, songs from movies and plays, and hosted by Eddy.


We couldn’t stay for the whole session due to the noise.