The ship arrived around 6 AM – I had set a wake-up call for 6:00 AM but beat it and cancelled so it wouldn’t wake Ellen. 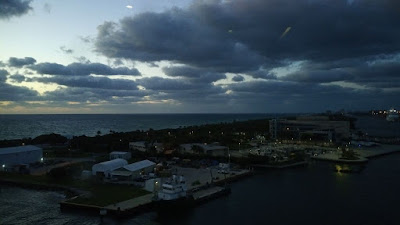 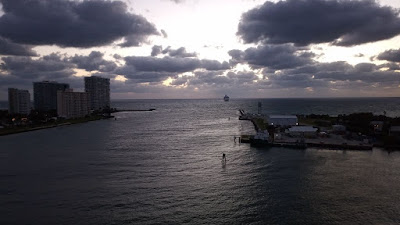 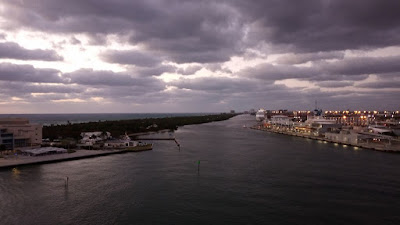 We had a nice breakfast (our only early breakfast together over the last two cruises).  I had all my usual stuff, which, even on disembarkation day, was really good.  The Oceanview Café was not that crowded so we had a reasonably relaxing breakfast.  We went back to the room to get the rest of our stuff and then joined our tour group in Celebrity Central at 8:15 AM.


We disembarked pretty quickly and easily and zipped through immigration.  We found our bags in the terminal area - they were not in the correct tag group but they are pretty easy to find.  We grabbed our bags and exited the terminal joining hundreds of passengers in the bus loading area. The situation then became chaotic since there were many more busses than there were parking spots for those busses. It was just a zoo out there as people had their luggage, which also made the available space even less.  I felt for the Shorex folks assigned to help people find their busses.  The Shorex agent that sold us our tickets was out there and she did help us find out where our bus would be parking.  And that is where he headed to wait.


After about 40 minutes, our bus showed up where it was supposed to. We put our bags on the bus and took our small bags on board – the bus was not full so I could put my little computer bag on a seat.  Our guide, Laurie, who sounded like she might be from Texas originally, gave us an interesting tour of the city (some Ft. Lauderdale trivia about some famous locals) before heading to Sawgrass Mill, a huge – really huge – indoor/outdoor mall.  We noticed that the parking lot was not very crowded - it was a Monday but I thought there would be more cars. We had about two hours at the mall and there were plenty of high end stores and outlets to check out; from our location at Entrance 2, the closest shops were those at the Colonnade – an outdoor string of upscale outlets. 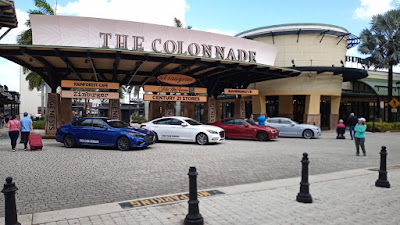 After going in to nearly all the stores on our side of the street (the shady side), we started to think about lunch.  There are two food options at this mall.  There are very pricey restaurants where you can get lunch for about $30 or so per person; the other option is the more typical Food Court, one you find in almost any malls. We used a map to find our way to the Food Court – all the usual places (Subway, Chipotle, etc.) were there along with some very unusual places (a sushi assembly line). 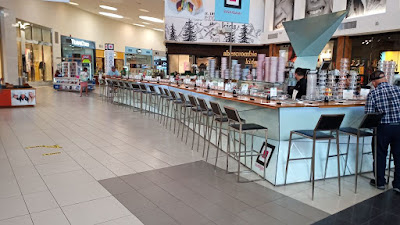 After checking out the various options, we decided on Maoz Vegetarian, an Israeli run Kosher veggie food stand.  For about $12, we shared the Falafel Salad consisting of five falafel balls (yummy) and four or five salads of your choice (I really liked the marinated red onions), pita bread, plus a coke lite.  Plenty of food – we couldn’t finish all of it.

After lunch, we decided to sit a bit (we were tired of walking, it was warm, and we were still pretty early for our meeting time).  We found a nice bench alongside some fancy stores across from the Colonnade.  We checked our emails and did some people watching.  We were startled by a loud crash and were amazed to find that a large coconut tree frond had landed just behind our bench.  We weren't in any danger because there was an overhang that would have deflected the branch.  Our guide had warned us about people being injured by falling coconuts.  I guess she was right.


We walked around a bit more and met our group at Entrance 2 near the “Gator Garden Display”. 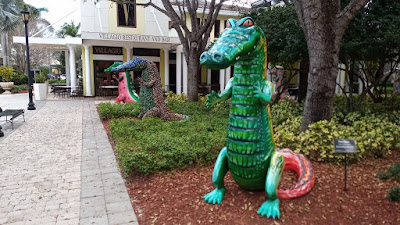 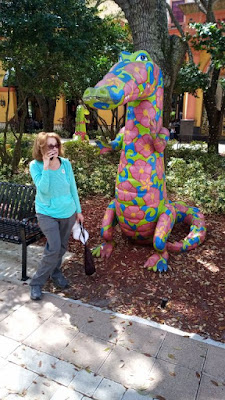 A local artist had installed gators of all types (like the Chicago Cows) in a nice little fountain park.  One in particular caught my eye – a gator decked out like Wonder Woman.  Very cool. 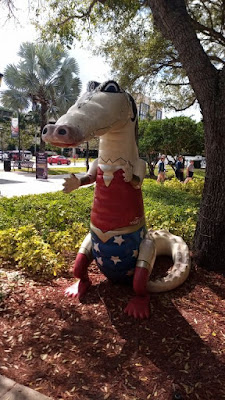 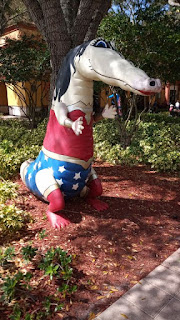 The bus dropped us off at FLL Terminal 1 for our flight on UA2386 (departing at 4:23 PM).  We printed boarding passes at the kiosk, zipped through TSA Pre-Check, and headed with our two wheelies and other bags to Gate C3.  We still had about two hours to wait.  We thought we had found the perfect seats - not too crowded and with plugs.  As it turned out, many of the plugs on several banks of seats were not plugged into the house current.  We did finally find a bench with working plugs.  That needs to be fixed.

Our plane arrived at the gate pretty much on time - the A320 was in retro livery even sporting the designation "Friend Ship", a term I hadn't seen on a plane in decades. 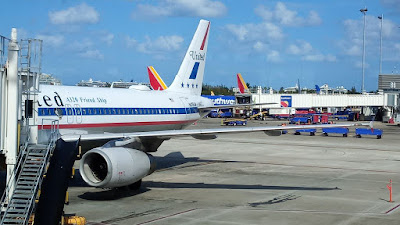 When it got close to boarding time, the gate agent asked for anybody who didn’t need their bags on board to come up and get gratis gate check.  I ran up there and was the first person to get both bags gate checked – these bags will be on the carousel in Chicago (the smaller planes generally put them in the jetway).


We are in Economy Seats 7A and 7B (window and middle) on our A320 – I have found these bulkhead seats to be really comfortable and they were.  I took the window seat so I could get some pictures of the takeoff and landing.  The person on the aisle did not seem to encroach on Ellen's space so the middle seat seemed to work out.


The takeoff was smooth and there wasn't much cloud cover so I got some great shots of Port Everglades and Ft. Lauderdale.  I don't know whether the ship in the picture is the Celebrity Reflection.  Many of the ships had already departed the port by the time we flew over. 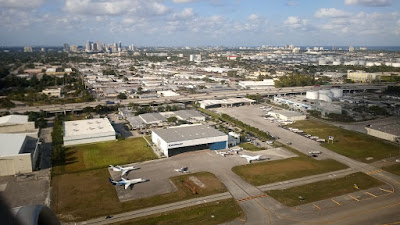 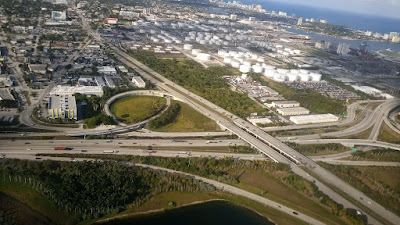 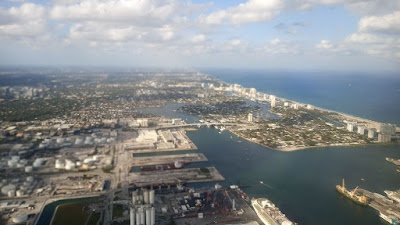 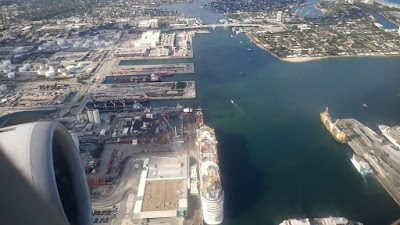 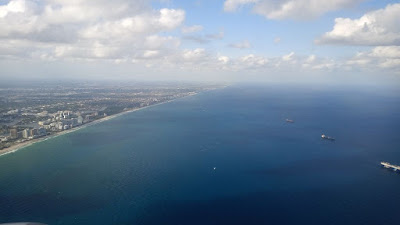 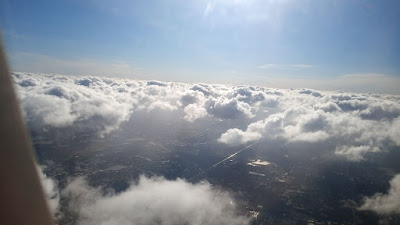 We had what was dinner (lox and cream cheese sandwiches) plus a coke (didn’t get enough coke and the flight attendant never came back).


The flight was pretty smooth and I did not have to leave the seat for the whole three hours of the flight (a new record for me). It was a clear night in Chicago and the city was all lit up. 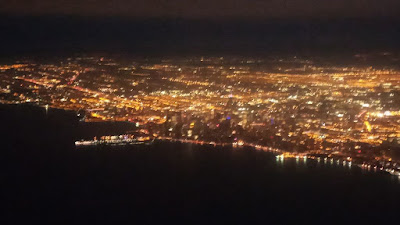 Our bags were the first few to come off the carousel and the cap arrived soon after I called.

In 20 minutes were home and it wasn't snowing or cold.