Even though we requested a tour, there was a glitch and no escort tickets were issued.  In addition, there will be an all-crew training exercise this morning at 9:45 AM so we would have been the only people who could have escorted.

After my usual good breakfast, I grabbed some breakfast for Ellen and stopped by the Shorex Office.  Eduardo was there and I asked him about the tours for the day.  He checked availability and said we could get on a tour at 9:00 AM (about 90 minutes from now) and I said that would be great.  We didn’t have to help on the dispatch (nobody told us) and we just needed to meet out on the pier at 8:45 AM.

The tour – “Cuyutlan Turtle Sanctuary” – met at the end of the long pier and vendor area.  I could already tell that the temperature estimate was on the low side based on what we felt when we disembarked the ship. 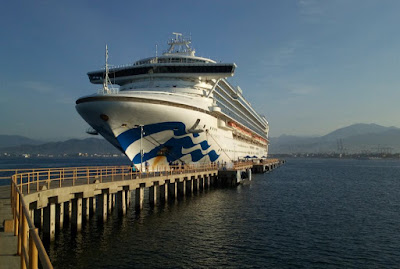 I got an interesting picture of Ellen as she made her way down the pier, sun umbrella in hand, as well as pictures of the greater Manzanillo area. 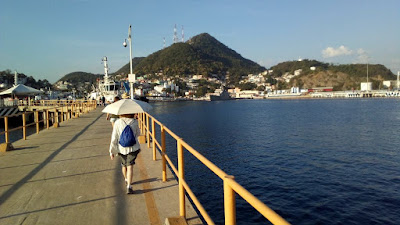 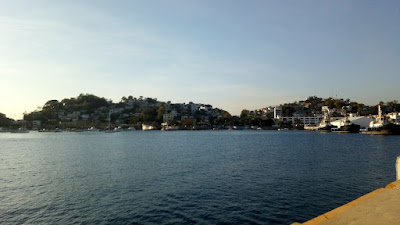 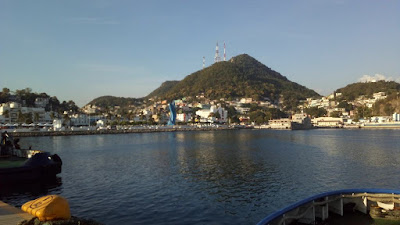 We boarded a new bus (with nice seats, A/C, and USB chargers) and there were enough empty seats that we each had our own seat in the back. 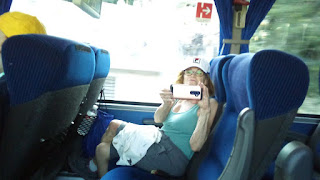 Our guide was Ramiro and our bus driver was Jesus.  We were the third and final bus to leave on this tour and we left just a few minutes late. The bus made a left turn out of the terminal area and passed through the old part of Manzanillo.  The streets were teaming with locals and there were quite a few cars on the road.  We passed by the commercial pier, which is one of the biggest in Mexico – evident by the sheer number of containers, some of which were stacked five high. 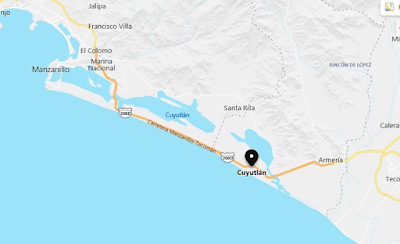 We then hit the highway to Cuyutlan, our first destination.  Once we left Manzanillo, the countryside was a combination of various types of vegetation, including bananas and coconut groves.  We entered a stretch of highway that had actual speed bumps – the cars paid no attention to the bumps but our bus slowed to a crawl.

We passed a large body of water – from what I could make out, some of this water, which is ocean water, is used to produce salt. 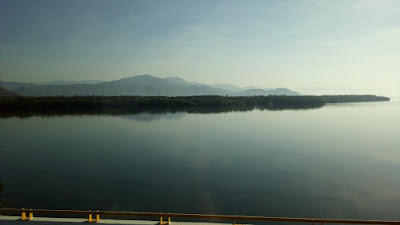 On the shore of this estuary, there were some power plants.  We had one comfort stop at a gas station and then our first stop, the small town of Cuyutlan, home to “The Salt Museum”.  Before we got to the actual museum, we saw how the salt was (or maybe, still is) stored - in huge piles covered by all sorts of materials. 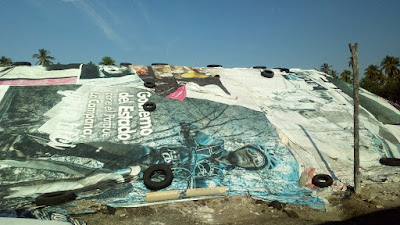 The streets of the town were pretty much deserted now. 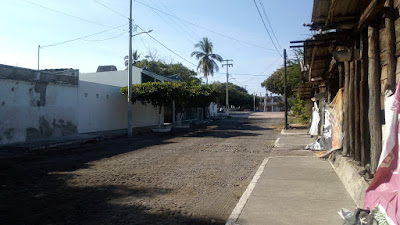 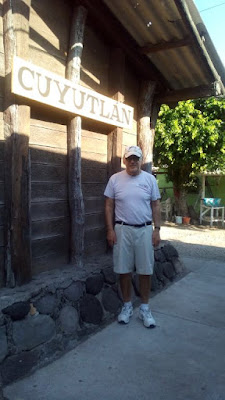 I don’t think salt manufacture is a big industry these days – salt was important in the past to preserve food and in the production of silver.  The museum was in a 100 year old building and our guide took us through and described the diorama depicting the salt production process. 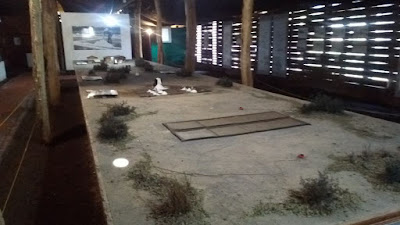 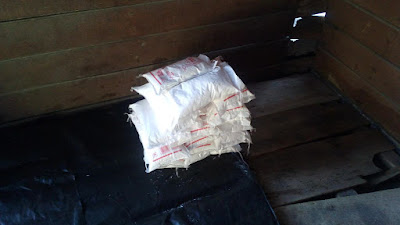 and some of the passengers brought them.  I don’t believe I could eat salt like that – unpurified and containing who knows what.

There was also the jaw bone of some kind of whale, that washed ashore some time ago.  Not sure what the skull had to do with salt, though. 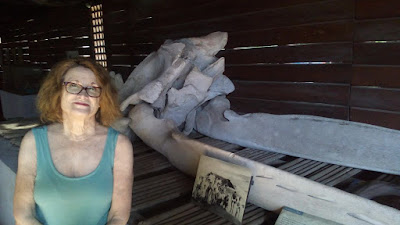 Our next stop was the “Tortugario Ecological Center” in nearby Armeria. 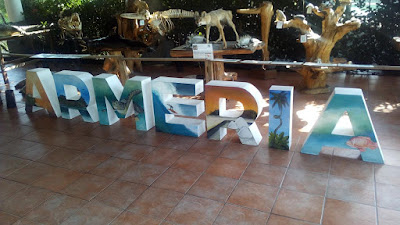 The center was established to protect the sea turtles that use this portion of the Mexican seashore as a nesting area.  Hunting turtles is a federal crime in Mexico but it is ignored by many.  The Center ensures that the eggs are protected and that the 70,000 baby turtles released back into the Ocean make it there OK.  The Center also protects the local species of Crocodile and Iguana.  We saw a brief video describing the situation with the turtles and then visited several pools containing various species of turtles and finally an aquarium containing just hatched babies. We also managed to take a decent selfie - a very rare occurrence. 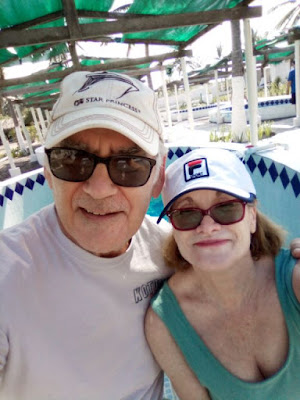 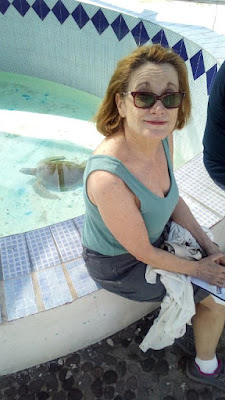 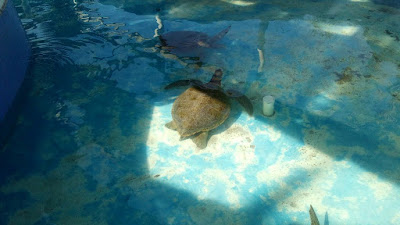 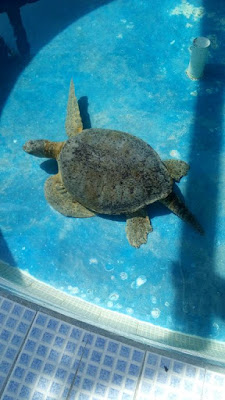 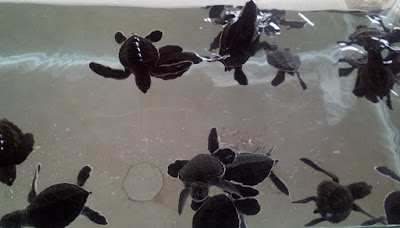 We also saw the fenced in area where the eggs incubate. 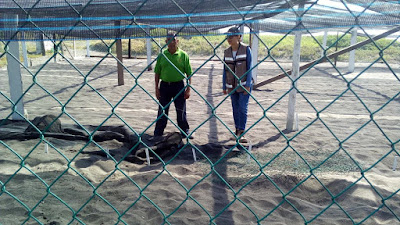 There are also mini-habitats for the crocodiles 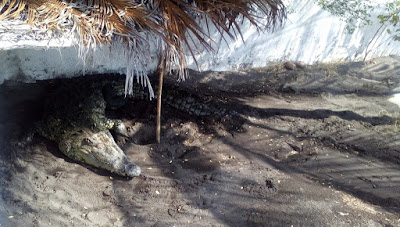 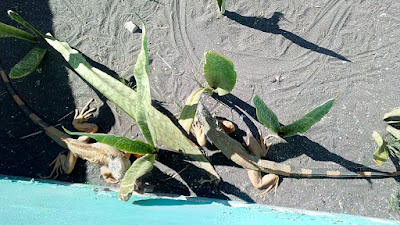 I found it interesting that our Center Guide Lupita spoke no English and worked through Ramiro as an interpreter.  Also the signage was not bilingual.  The Center needs to think about those issues if they are going to host tours in the future.  It was about 95F and Ellen and I stayed mainly in the shade.

We also walked to the nearby black sand beach, which on this day was practically deserted.   This is also where the baby turtles sprint, sort of, to the ocean to begin their lives. 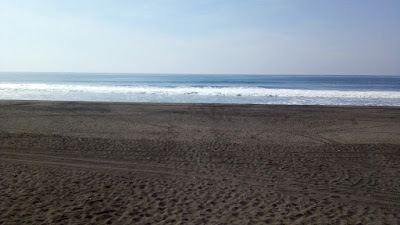 Considering the heat, I think our stay at the Center was a little too long.  Also, no water was available and some of the guests looked like could use some water.

Our final stop was the Bienvenidos Hotel for our snack and drink stop.  The drink process was quick and there was a good selection of drinks (beer, soft drinks).  I had a Corona and Ellen had a Coke Lite. The snack consisted of a hand-made (no gloves) tortilla with guacamole (2), wrapped and fried tortillas with potato filling (3).  We were assured by the head guide that everything was vegetarian including the oils used to fry things.  Everyone was eating and so we did, too.  We’ll see later how that worked out.  Both items were good but I traded my Corona for a Coke Lite.


After eating, Ellen and I checked out the Malecon 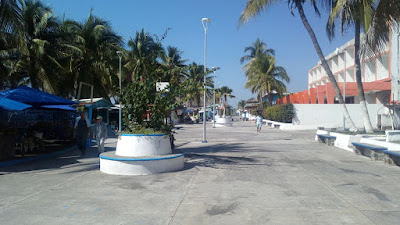 and the vendors as well as the beach, which was again pretty much empty. 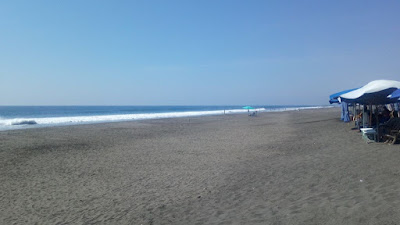 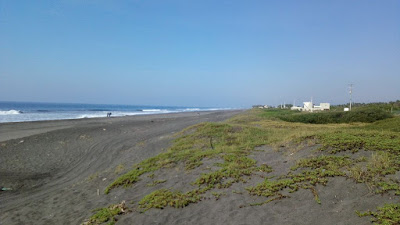 From the hotel, it was a 45 minute ride back to the pier in Manzanillo.  As we got close to the pier, I was able to get a picture of Grand Princess docked as well as the boats in the nearby marina. 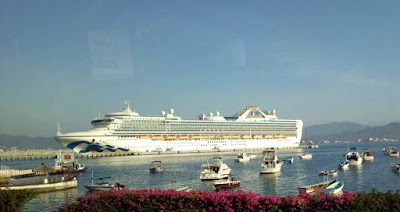 As we waited in the line for security access to the pier, we enjoyed the music performed by a female singer and her band.  Overall, a pretty nice day in Mexico - I guess timing is everything - and better than just staying on the ship.


We ordered an iced decaf latte and an iced chai latte to cool off and drank them in the Crooners Lounge.


Even though we did not make reservations tonight, we still got a nice table in the Michelangelo Dining Room.  I had the best dish they serve, “Trenette (flat noodles similar to fettuccini) with basil, potato, and haricot verts (aka green beans”.  I also had the Grilled Antipasto with Goat Cheese (OK) and the Tempura Veggie (OK). Ellen had the Orange Roughy (good) but her mushroom tartlet could not be made without the veal sauce (so scratch that dish).


We ate pretty fast and caught the first two songs by Tommy Proulx, Saxophonist.  We decided we needed a quieter place so we went to the Wheelhouse Bar to read and listen to Jay Gulbicki.


Then it was on the room because a day in the hot Mexican country side can wring a bit of the energy out of you.


I don’t think the seas will be smooth for the 300 nautical mile trip to Mazatlan, because when we used Deck 7 to get to our room, we were facing quite a headwind.
Posted by Hal T at 3:55 PM