The ship is here until 9:30 PM, so a full day for the actual Fat Tuesday.

Here's where we are today according to Google Maps.  The map also shows how far we walked yesterday to earn those 14,000 plus steps. 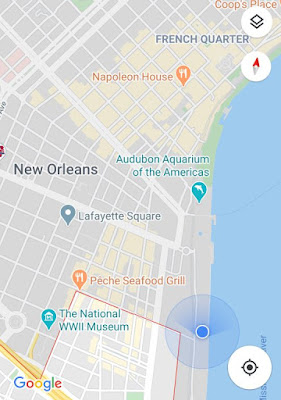 Not a particularly warm day but, on the plus side, it's not raining.

On my way to breakfast, I got a nice picture of the Crescent City Connection Bridge. 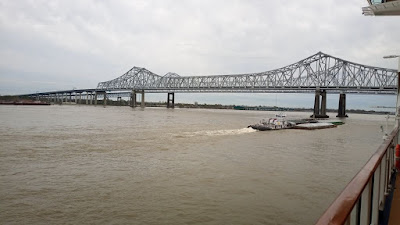 I had a nice breakfast of pancakes, chocolate syrup, sliced bananas, walnuts, and two fried eggs – a breakfast that says we are going to be walking a lot today.


Our first stop was going to be the River Walk Outlet Mall but when we tried the elevator to the mall (right across from the Cruise Port exit), the “Up Button” flashed red and no elevator arrived.  It took a while until we realized that this was THE Mardi Gras and that nothing was open.  No mall and no shops along the street – only bars were open.


We had planned to hang around the mall for an hour or more and then find a spot on Canal Street to watch the last big parade – the Krewe Rex – finish up there (there are 26 floats in this parade).  So Plan B involved going to Canal Street now and standing in a good spot and catch the parade.  We did find a very good spot right up against the police barrier with very few – and still sober – folks around us. 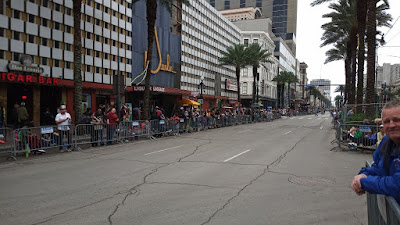 I checked the parade app and the parade was halfway through its route, which meant it would be at our location in about 90 minutes, which be about 1 PM.  We chatted with some of our neighbors and did a lot of people watching. One particularly interesting sight was that of a pizza vendor selling slices of pizza for $7 out of a pushcart. In a while, I checked back with the app and found out that the parade had stopped (pretty much the same spot) because a problem with another parade not clearing away their floats.  I checked back in a half hour and the parade was still in the same spot.  We did the math and figured that we would probably have to wait another two hours for the parade to get to our location.  We decided to go back to the ship.

We soaked in the ambience of Mardi Gras and that would have to do.

When we got to the pier, the Carnival Ship had already departed. 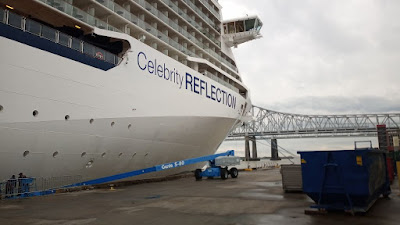 We had a nice lunch in the Oceanview Café – I had a huge salad with feta cheese along with a bowl of Cream of Broccoli Soup from the Aqua Spa Café, which pretty much did it for me.


I picked up my reading up in the Solarium – still reading “The Murder Book”.  Jonathan Kellerman has a nice humorous writing style that I like.


We had reservations in the Opus Dining Room.  We did all appetizers tonight – veggie spring rolls (good), eggplant parmesan (OK), and Ellen had the Lox. I tried the Strawberry Cake but switched it for the Apple Pie with ice cream (go with a winner).


We passed on the Production Show, “Elysium”, because we had seen it before and knew it was going to be loud.


We heard Velvet Duo do most of their set and then to the room for some quiet.


We stayed up until the ship departed around 10:45 PM.  It will take the Captain about five hours to get out into open waters.
Posted by Hal T at 8:12 AM