This is our first cruise since we disembarked in Florida on March 2, 2020 after dodging COVID-19 in New Orleans during Mardi Gras and in Mexico (generally).  We have also not flown anywhere since we flew back from Florida back in March 2020.  There is some trepidation on our part as we get ready to get back in the saddle.  We are hoping that two shots plus a booster along with masking and distancing will be enough to make this a safe flight and cruise.

We are on AA1424 departing ORD at 10:12 AM so we scheduled our taxi at 8:00 AM.  The taxi was $33 versus an Uber at $38 so we opted for American Taxi.  The cab arrived a few minutes early and we left for the airport right on time.  The driver was not wearing a mask in violation of both Chicago and Illinois masking regulations.  The cab did have one of those useless plexi-glass shields open at all sides so we wore our masks (we would have anyhow).  The cab set a record by getting to the airport in under 15 minutes.  One new thing:  I set up a “payment in cab” account and paid via credit card right on the app.  No touch and no hassle way of paying.  That was a clear improvement over the previous way we handled this.

We wound up checking our bags with the porter outside (he was looking for business) and.  We were on different locators so I thought there would be a hassle with the bags but there was none and we got our official boarding passes and headed to the TSA line.  There literally was no one in the line and we went through the security check in no time.  No taking off of shoes, jackets, or starting up our laptops.  We had renewed our TSA standing before we had any idea whether we would be flying anywhere or sailing at all.  Turned out to be a good idea.

We headed to our gate, H15.  Everyone in the airport had to be masked and compliance was nearly 100 percent – certainly, there were noses poking out – those people must have a genetic marker for “uncovered noses” because even though everyone around them has their noses masked, they don’t.  We had some time and I was thirsty and a little hungry so I got an iced mocha latte from Mickey D ($5), 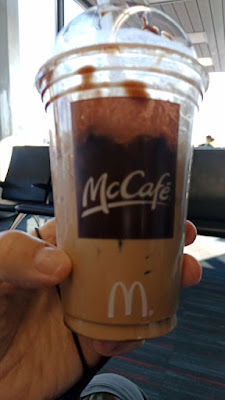 which turned out to be really good and gave me a chance to take off the mask.  We found seats in the waiting area away from people so the masks were a second level of protection.  Our plane arrived on time – I think it was coming in from Austin – but it held short of the jetway. 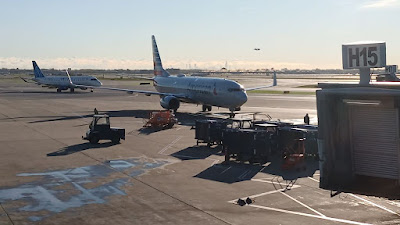 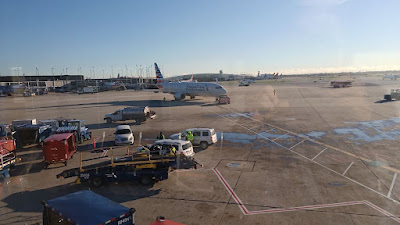 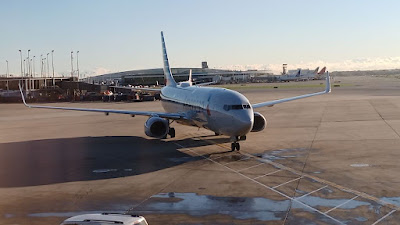 I thought there might be mechanical issue with either the jet or the jetway because a few minutes later a tractor pushed the plane back away from its position.  The plan then used its engines to go over to Gate H17 – so it was just a gate change (the app had also let me know of the change).
We had purchased economy plus seats – bulkhead 8B/8C (middle and aisle).  The window seat had been empty until the day of the flight so we would have a neighbor but no one in front of us.  I got these seats not only for the legroom but to also minimize the distance between us and other passengers. We boarded on time at 9:45 AM.  The 737-800 was about 75% full and everyone was masked.  The passengers did not look like they would go mask-crazy during flight and they didn’t.  Only one passenger played loose with the mask rules and that was a young woman in first class traveling with a baby and a child.  She wore her very loose cloth mask over her eyes while texting during a lot of the flight.  She was a foreigner and who knows what her masking paradigm was.
One clear drawback of having the middle and aisle seats in a three across set up was the lack of photos of the takeoff and landing (as demonstrated here). 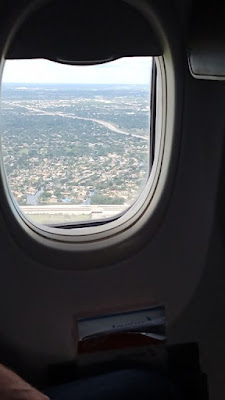 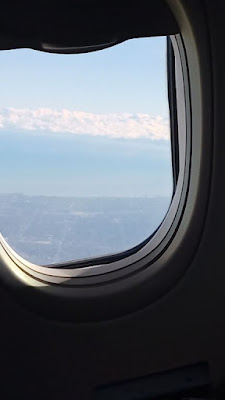 The flight was smooth and in just under three hours we landed in FLL.  As might be expected, the masking in FLL was uneven (even though airports are under a mask mandate).  We wore our masks because of the people density in the baggage area.  Our bags came out rather quickly and I called the hotel for a pickup.  After multiple calls and over an hour wait, our ride came and we were on our way to the La Quinta by Wyndham – Ft Lauderdale Airport.

We have stayed at this hotel in the past (when it was essentially brand new); it is near the huge shopping center complexes that used to contain a K-Mart (no longer) and even a kosher dairy restaurant. Ironically, the Moon Café, where I picked up some food poisoning prior to a past cruise, was still there.

There was some confusion at check in – I made the reservation through Hotels.com and used a free night as payment.  The check in folks had no idea about that and said that I already paid for the full room rate.  They also wanted to put a $75 deposit on the room.  I checked what I paid for the room and it was correct and, in another bit of irony, the hotel’s charge card reader was not working so no transaction was made.  Done and done.  We set up a 11:00 AM shuttle ride to Port Everglades ($10/pp) with the front desk.

We were given a map of the area and it looked like the nearest restaurant would be over a mile’s walk.  We got some menus from the front desk and ordered a NY Pizza, Cesar Salad, and two Diet Cokes from Pauli’s Pizzeria.  Pauli must have entered my credit card information incorrectly as he called back and said the card had been denied.  I knew that was impossible since I had put in a travel notice with my bank.  I gave him another card and that was OK.

The food arrived less than a half hour later – the salad was OK but the pizza was very good.  Even though I got the smallest pizza available, we couldn’t finish it.

The room was very noisy – one group on our floor would emerge from their room and make noise in the hall and then go back into their room.  Hopefully, even crazy noisy people need to sleep. Lights out at 10:45 PM.