Tough sleeping night – up several times – decaf/not decaf – who knows.  As usual, getting up early gets you a nice picture of the sunrise. 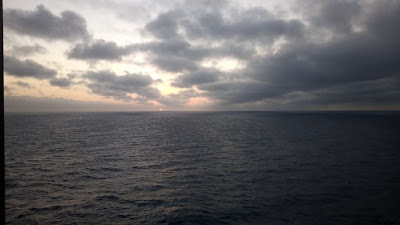 Arrived at the Oceanview Café for breakfast at 7:00 AM – put my magazine down to save my table and got some waffles, cottage cheese, sour cream, and strawberry compote.  Also a scoop of scrambled eggs (really good), and a biscuit (first time on the buffet but really crumbly and not biscuit-like).  When I got back to my table, my EW was gone and there were people sitting there.  I checked with one of the waitresses and she found it – she had tossed it into a drawer, not knowing that the drawer was full of water (?).  She offered to buy me a new one but, instead, I ripped off the last third of the magazine (the wet part) so I would have something to read.  The next time, I will put a cup of coffee next to the magazine so it doesn't get tossed.

The breakfast was good but the "screaming lady" is on this cruise and in good form.

When I left for breakfast, I noticed that Ellen room service order was still on the door so I spoke to Guest Services, who told me that room service folks cannot go into crew areas to pick up orders.  I would need to call for service.  I left the order on the door.

When I got back from breakfast, the order form was gone and it was not inside.  In the meantime, I brought Ellen breakfast (lox, fruit, herring, French toast).  At 8:30 AM, Room Service arrived with Ellen’s second breakfast.  I can only conclude that my call to Guest Services resulted in a call to Room Service and the pickup.  I think Room Service is now aware of us.

The morning was spent in both the Aqua Spa Café and Solarium – checking out the waves and going over the talk for today.  Because the specialty coffees are so pricey on this cruise, I am drinking the Lavazza coffee from the dispensers.  That's also pretty good coffee. And there is a bonus being in this venue - the screaming lady is not allowed in here.

We had lunch in the Aqua Spa Café – Caprese Salad, Asian noodles, tuna salad, veggie wraps, and spinach salad – like OD’ing on healthy foods.  They were all pretty good.

After giving it much too much thought, I decided to go Smart Casual for my lectures – hey, we are in the Caribbean.  My lecture partner, Thom Duryea, was in a suit and tie for his talk, so the opposite ends of the spectrum.


I got to the Theater a little early for the 2:15 PM start time for “Forensics and History: The Mystery of the Romanovs”. 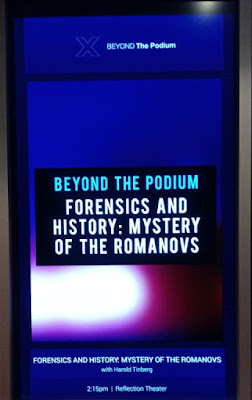 I am using my own laptop for this presentation, the first time my new HP laptop has been used on a ship.  Reflection uses a VGA cable so I used my adapter and the picture looked great, color and clarity.  The only issue was that the screen is so big that I have to look up to see the top of the slides.  The headset mic was a bit uncomfortable with my glasses so next time, I will probably go with contacts.  That will also make it easier to see the screen.


I spent a little time talking to a few passengers and then Rich introduced me.  The talk went well with the one exception being a little tickle in my throat that need some iced tea to vanquish.  That doesn't happen often and the audience was patient.  The talk ran about 52 minutes, a little long but OK – it covers a lot of stuff.  The Reflection Theater has a capacity of 1232 people (according to the Celebrity website) so I would estimate that the theater was about 40 percent full – so the crowd was somewhere between 400 and 500 attendees.  The turnout was good - and would have overwhelmed Celebrity Central -  considering there was a very popular shopping event going on and the weather outside was perfect.  From my perspective on stage, the theater just doesn’t seem as big as I remember it.


We went to the Solarium for the afternoon.  I tried to read but I kept nodding off (really tired) so I made little progress of “The Fix”.


Tonight is Evening Chic Night 1 – we checked the menu and there was nothing good enough for us to get dressed up.  Instead we went directly to the Oceanview Café, where I had a salad and pesto pasta with garlic (made fresh for me) along with garlic rolls (absolutely yummy).  The desserts featured “Crumbles” so I tried spoonsful of the various fruits with some cherry vanilla ice cream.  The food was probably better than downstairs plus quieter and with a view to boot.  One of those views was a magnificent sunset. 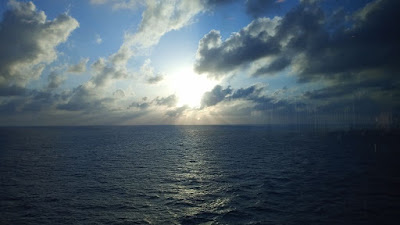 We changed into casual clothes and went to the theater to see “Lance Lipinsky and the Lovers” do their 50s and 60s cover tribute. 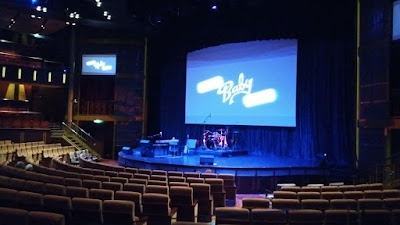 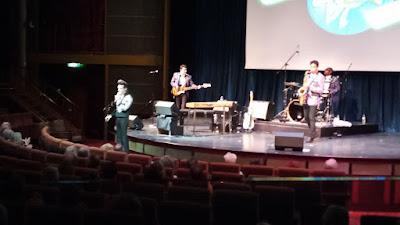 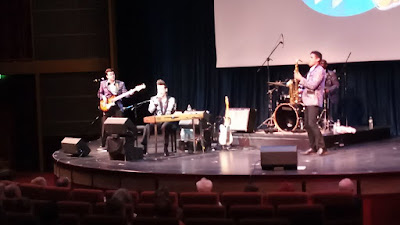 We’ve never see them before and they were good but a tad loud.  It’s ironic but no one in this group was even around as a child in that era.  Lance was interesting with his Ace Ventura hair and Jerry Lee Lewis piano style.  I left a little early to see Mario in App IT to figure out why the Celebrity App won’t load on my phone.  He could not solve the problem but not from a lack of trying.


I met up with Ellen in the Embassy Lounge where we listened once again to the Velvet Duo.  The set focused on popular ballads tonight and the volume was a bit lower.  It was a good set.


The Grand Foyer of the ship is still a very loud venue – tonight, “Long Play” was the featured band.  I took their picture but could not take the decibel level. 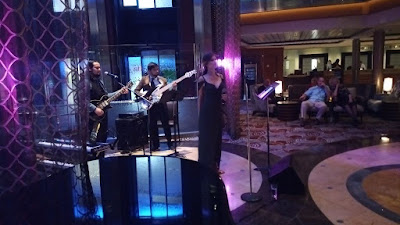