I was in the Oceanview Café when it opened – today’s fare was pancakes, chocolate syrup, bananas, and walnuts plus fried eggs.  A lot of food but I was hungry.  This is a big ship and I will walk off most of this breakfast just going to and fro.


Will introduced my final talk – “Forensic Detectives: Identifying America’s Fallen Heroes”.  The turnout was small due to the early hour but the audience was still engaged and seemed to appreciate the session.  I asked how many people had seen all the talks and about 90 percent of the audience raised their hands.  I got a nice round of applause at the end – the talk ran about 45 minutes – and several people came up and thanked me for the presentations.  A successful series on the first leg of our double cruise.


We spent the rest of the morning on Deck 5 – it was breezy but nice.


We had lunch in the Oceanview Café because it was supposed to be Buffet Extravaganza.  There was a lot of meat available but for me, it was a Cesar Salad, a slice of pizza, and some tuna and egg salad.


After lunch, I was in the Solarium reading – my goal is to finish my book today.  I read until my Kindle ran out of power and now I’m in the room typing this.


We went to dinner in the Opus Dining Room because we had ordered kosher meals for tonight.  Before that, we both had the butternut squash soup (very good) and I had a Greek Salad, which really wasn’t a Greek Salad but a romaine salad with some tomatoes and cucumbers (it was still good with their best dressing, Blue Cheese).  The steak and duck were seriously over cooked and Ellen could not eat the duck so we shared my overdone steak.  We shared this information with the Maitre D’ and he suggested we looked at the pre-packaged meals.  We got the list and there are some nice options so we may give them a try on the next cruise.


We went to hear Comedian Dan Wilson in the Theater at 7:00 PM – we’ve heard him several times in the past and he was still funny despite the fact that his act has changed very little.  I think we was actually wearing the same clothes he wore the last time we saw him.  Before the show started, Rich introduced the Captain, who also tried to be a comedian. 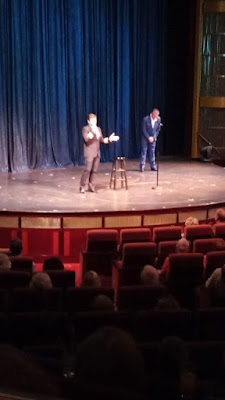 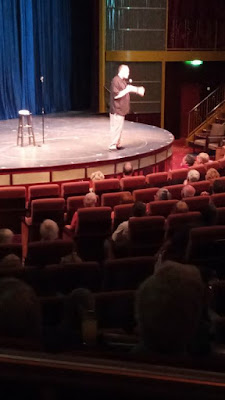 After the show, we went up to the Oceanview Café to get some coffee, tea, and some sweets.


We tried to read in the Library on Deck 10 but the noise from the party band, Sea Sharp, 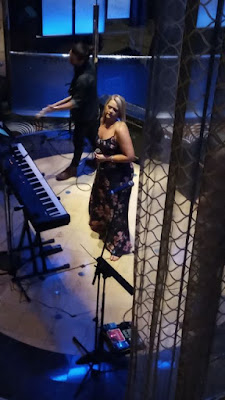 funneled up the Grand Foyer shaft and was almost as loud as if we were downstairs.  We gave that a little time and then headed for the silence of our room.


I finished “The Other Woman” – a long book with a less than spectacular villain.  What I did like was the way Daniel Silva worked in some ditties on the current Administration and its craziness.  No names were mentioned but he did not attempt to create a fictional “American President” in this novel but the one we have now.  He stopped using the term “The Russian President” and started calling him “The Tsar”.  Even the “Prime Minister of Israel” had his legal issues described in this book.  The ending was semi-satisfying but nevertheless the book was a good read.


We went to bed pretty late (I had to finish the book).


Always nice not to have to deal with bags and stuff as an in-transit passenger.