The day started off with wonderful sunny weather which degraded into showers and cloudiness by departure time. 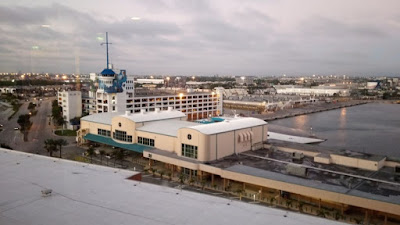 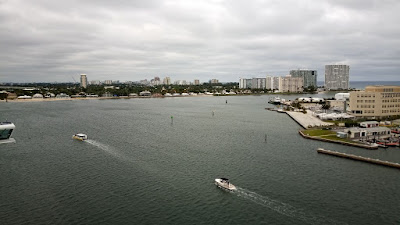 The Serenade of the Seas also here today. 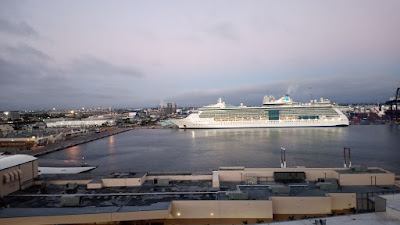 Even though it was disembarkation day for nearly 3000 passengers, I did manage to get a decent seat in the Oceanview Café for my usual wonderful breakfast.  Everything was available.  I also brought Ellen her usual breakfast.


Immigration Process.  In-transit passengers not leaving the ship met in Celebrity Central at 9:45 AM, where we received our new sea pass cards sealed in an envelope.  We were then escorted off the ship (signing out with our old sea pass card, which they kept) and into a waiting area in the terminal.  After a few minutes, we were escorted through Immigration, where we flashed our passports, and then proceeded to an area to have our cards activated and our new pictures taken.  We then went up the ramp on our own to re-board the ship.  I got my glass of Prosecco, which was very good, and we went to the Oceanview Café for our way too early lunch (we did want to beat the rush).


After a lunch of salad, pizza, and some tuna and egg salad, we went to an empty Solarium to spend the rest of the day.  It was too chilly and wet outside.


We spent a few minutes once again with Agent Blair, who doesn’t get smarter or more appealing with each showing.


We then went to the room to get ready for dinner (we made reservations the night before).


We had table 517 tonight (our second choice) and a new set of waiters.  The Opus Dining Room was especially noisy and hectic tonight – they let in the fixed seating folks about 15 minutes early and by 5:45 PM, every table was full and the noise level was difficult to deal with. We both had the Seared Salmon (overdone) – Mushroom Soup OK – Endive Salad (never again) and Orecchiette Pasta with unidentifiable veggies (veggie menu – never again).  It was so noisy and crowded and slow that we left before dessert and coffee.


We passed on Dan Wilson’s Show as we had seen it last night (we caught a snippet and confirmed that it was the exact same show) and went instead looking for a quiet place.  The Library and Deck 5 (Al Baccio) were loud (Long Play was wailing in the Grand Foyer). 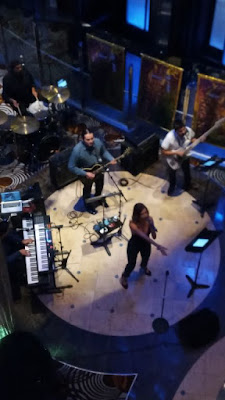 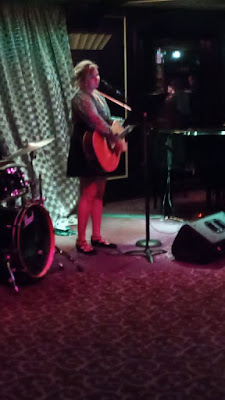 We heard her before dinner in the Grand Foyer but she was so loud (due to the amped up speakers) that we couldn’t stay.  In the Ensemble Lounge, she was mellow and relaxing doing songs by Peter, Paul, and Mary and other folk type songs.  She was apparently taking over for Linda Capewell and they shared a common sound.


When Nikia was done with her set, we saw the String guys walking in so we went to the room for the rest of the night.  I was still jumpy from all of the noise I had encountered throughout the night.

This is the itinerary for the cruise.  Clearly, this is a Mardi Gras cruise as the ship will be in New Orleans right up through Fat Tuesday, February 25, 2020.  It's like having your own hotel with meals for the big event. 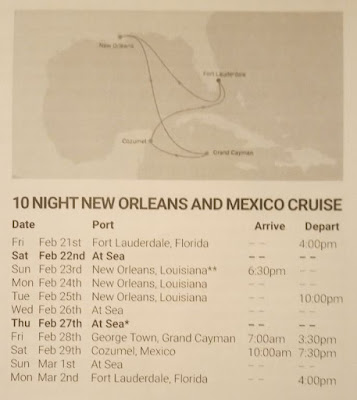 We are hoping that our new neighbors are quiet.