We are back in Colon for at the third time in a year (spanning 2019 to now).  We are here with the Marella Discovery 2, which got the prime berth next to the “city”.  We are docked at the Colon 2000 Cruise Terminal, which was under construction the last time we were here.

Most of the excursions available at this port involve the Panama Canal Locks - we've been through the Canal numerous times so there are no tours that interest us.  Besides, it is quite warm today so we need to be careful. 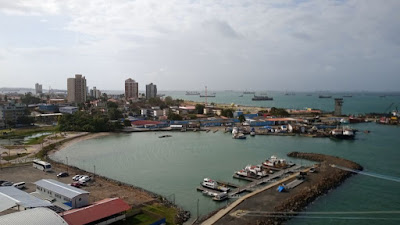 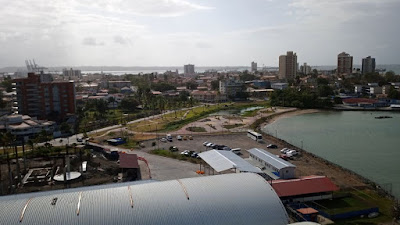 After breakfast, my usual (continuous to be good), I brought Ellen her usual breakfast.


We disembarked the ship and went right into the new terminal building. 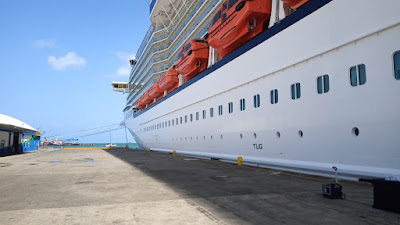 The structure has been under construction for several years and still is.  Just beyond that area is a new large shopping area complete with salespeople in spiffy uniforms and lot of merchandise ranging from chatchkes to pricier items like jewelry.  They were selling three beers for $5 – now that’s a bargain.  Lot of passengers were lined up to buy stuff.  The shopping area reminded me of similar places in Cartagena and Fuerte Amador.


Rich, the Cruise Director, was in the store directing people to the main shopping area down the road (I think the 411 in the Celebrity Program was a little light and passengers did not know exactly what to do ashore).  The walk to the other terminal took about 10 minutes and ran along a narrow grassy area, which, one day, might be nice.  We came across a monument to Manuel Amador Guerrero, the first President of Panama. 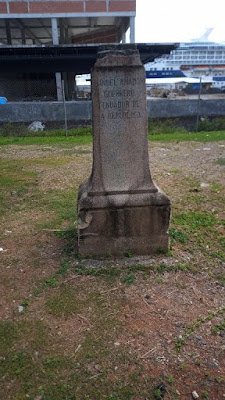 Across the street were rundown buildings typical of this part of Colon. 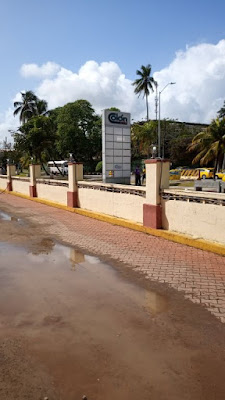 There was police (plain clothes) presence along the route and incredibly persistent cabbies trying to book tours and rides.  We have, however, learned how to deal with the gauntlet.  Some passengers told us that the cabbies were so annoying that they decided not to go to the shopping area.


The other terminal was pretty much unchanged.  We checked in with the spa located in the front.  They wanted $50 for an hour massage, which I thought was less than they told me last year.  However, this is still too pricey for this area (they have the monopoly so they can set the price).  The owner told us to come back at 1 PM when they will have more staff available.  She wouldn’t negotiate on the price so we kept walking.  We checked out the whole shopping area (which, by the way, has a major appliance store).  I ventured across the street and took a picture of the city sign (a must). The Reflection is in the background off to the left.

We also ran into Ashlie Amber, the singer we just saw on Celebrity Edge, as she was walking, with a companion, along the street next to the shops.  She was sporting her usual big hair so she was easy to spot.  We chatted a few minutes and told her we would be looking forward to her upcoming show (we didn’t know she would be on Reflection).


It was getting quite warm so we headed back to the ship, arriving there pretty drenched from the humidity and a tiny rain shower.


It was a little early for lunch so it was back to the Solarium.


We had a quick lunch in the Oceanview Café – salads and pizza.  I should mention that the pizza is pretty good but it needs to be eaten as it comes out of the oven.  Celebrity also keeps a spare pizza in a warming drawer but if you can get one from the oven, that is the best.


The afternoon was all Solarium – it was cool, windows were cracked to vent chlorine, and it was quiet.


Dinner was in the Opus Dining Room.  HMT: Polenta with Mushrooms (not so good), Watermelon and Tomato Gazpacho (almost like the real thing and OK), Boston Lettuce/Gorgonzola Salad (OK), and Penne Primavera (just penne and peas - expected something different). ET: Polenta, Entrée Salad (so huge, the waiter took it back and brought a smaller version).  All in all, not so great a dinner and our table was next to a table of four Nordic people, who were loud enough that we could not hear each other.  No desserts or coffee tonight.  We needed to get out of there.


We went to the theater to see what Greta Salome (violinist/vocalist) was like as we have not seen her before. 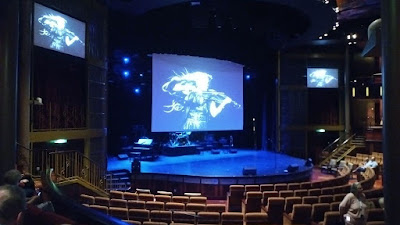 We had high expectations but the preshow music was so loud (70 db on my app) that we were deaf before she came on.  She is from Iceland and a Eurovision contestant.  Her amped up violin was even louder and it only took two songs before we exited and went to the Ensemble Lounge.

We stayed there until the string duo showed up and then our only option was the Solarium.  The Solarium was quiet and peaceful and perfect for reading.


Clocks move back one hour putting us on CST as we head to Puerto Limon.


The seas are cooperating and the bow based noises from the other night are not an issue tonight.
Posted by Hal T at 9:01 AM