It’s breezy outside – the water has been drained from the pools, and the ship is doing its dance to the ocean swells.


When I went up to breakfast, people were already staking out their spots in the Solarium and Pool Decks – a day committed to being bathed in DNA damaging UV rays.


We did find some seats in the Solarium – still the most peaceful venue on this ship.  Still reading “The Fix” – the story is quite complex (FBI, DIA, spies, etc) and I am trying to stay up with Amos Decker as he sifts through the clues – he has perfect memory and I don’t.


The Lunch Buffet today is featuring the “Pub Lunch” – giant trays of fish and chips.  This is generally a good lunch but it draws a good crowd.  The negative side is that by the time you get your food and sit down, both fish and chips are cold.  Nevertheless, the food was pretty good.  And, also, you wind up eating too much.


My second talk is at 2 PM in the Reflection Theater – “Forensics and History: The Search for the Unknown Titanic Child”.  Originally, Will has told me that I would be in Celebrity Central in the morning but he probably figured out that that would not hold the potential crowd so he managed to change things around to open up the theater.


Because of the windy conditions, Lance Lipinsky’s deck concert had to be moved into the theater at 3:00 PM (I got calls from both Will and Rich on this so I would be aware and compensate).  The screen was still down but Lance’s instruments were on stage.  I found a place to stand and I had to aim my laser pointer around and through the set up to highlight stuff on my slides.  Will introduced me and I engaged Warp Drive to finish in 45 minutes.  I quickly grabbed my computer and all of the cables and exited.  While talking to a passenger at the theater entrance, I realized that I had left my very nice computer bag on stage.  I went back and it wasn’t there – one of the stage hands came out and handed the bag to me – it had my backup jump drives in there along with some other accessories so I was glad to have it back.  It was a bang bang lecture and I can only hope that people got something out of it.  Some of the positive comments I got as I was leaving indicated that the lecture was OK.


After the lecture, it was back to the Solarium – I am getting very close to finishing my book.


We had dinner in the Opus Dining Room – we have found acceptable tables – 417 and 517 are along the railing overlooking the lower level of the Dining Room.  There was Caprese Salad (HMT and ET good), roasted red pepper soup (HMT – like thin and bitter gazpacho), iceberg wedge salad (HMT very good), vegetarian lasagna (HMT OK), broiled salmon (ET OK).  No dessert and no coffee or tea tonight.


After dinner, we went to the theater to see Matt Johnson, magician and escape artist, and winner of "England has Talent".  He was personable enough but the show lacked pop and he only did three tricks before we decided to leave. 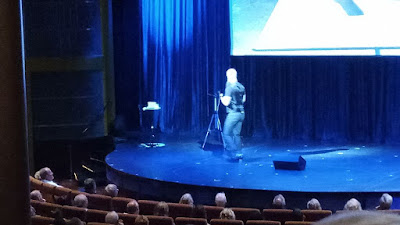 Our next stop was the Ensemble Lounge – Velvet Duo was playing a double set.  We stayed for most of it but eventually, it was too much and we retired to the cabin for the night.


The ship is really moving and the orchestra of noises has gotten more complex.
Posted by Hal T at 7:35 AM