A combination of the time change and the rock and roll ride last night resulted in my getting up at 3 AM and then I don’t know what happened until I finally went to Horizon Court at 6 AM.

FYI – we survived the meal yesterday in Mexico.

Another pre-breakfast sunrise awaited me on Deck 7. 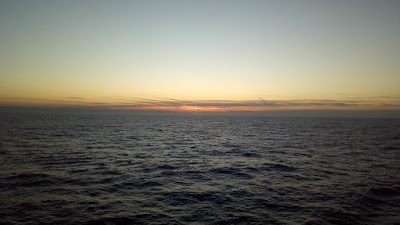 I tried something different this morning – two pancakes, one of which was allegedly banana, and one fried egg.  Also had a half bowl of oatmeal, which was very good.  Still hungry, I had a biscuit.  The biscuits are a special treat on Princess.

After breakfast, I spotted the coast of Mexico and Mazatlán. 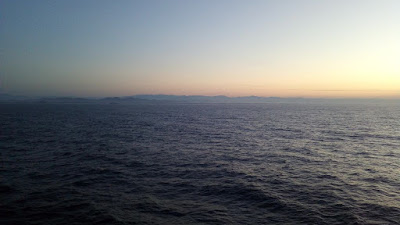 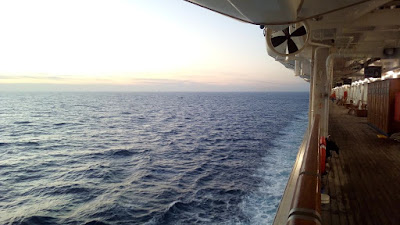 Visible on the starboard side of the vessel was the world's highest lighthouse (perched on a hill). 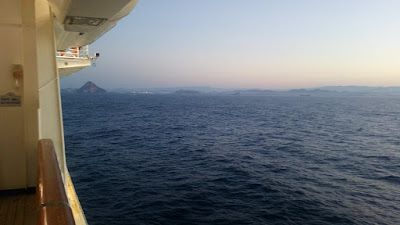 At 8:00 AM, Ellen and I paid our first visit to the Da Vinci Dining Room for breakfast.  The menu is not exactly the same as the late breakfast/lunch menu but Ellen did have pancakes and fried eggs and I tried the Muesli (didn’t like it).

Mazatlan is a commercial port 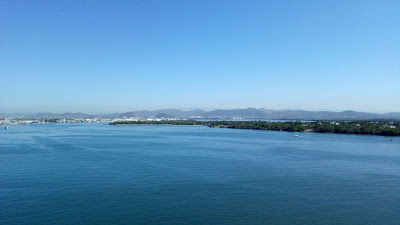 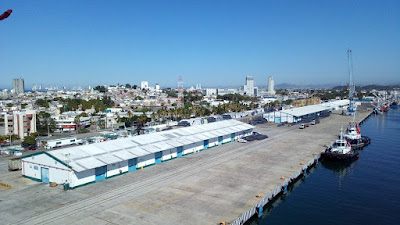 and you cannot walk from the ship to the terminal – the port provides a tram that seems to run continuously and gets you there is about five minutes or less.  There is no waiting since there are so many trams running.

Ellen opted to stay on the ship so at around 9:30 AM, I disembarked and took the tram to the terminal.  I walked past the few shops, bars, and restaurants and out in the open court area (more shops).

At the end of the block, I checked availability for a massage at the Beauty Shop.  I’ve been there a few times – the shop is about 10 X 10 and can really only accommodate one customer at a time.  The owner, Veronica, has been there for years and still doesn’t speak English.  The place is very cramped and the massage, which was marginal, ran just about a full hour.  The prices are a bit high for Mexico at $40 and the place is just not that nice.  I don’t think I will be coming back the next time I visit. So, adios, Veronica.

I was just leaving when a couple came into the shop.  The woman was looking for a mani/pedi – the place is so small that I couldn’t see how they could fit in any nail work. The prices, by the way, were $10 for the mani and $25 for the pedi (essentially US prices).

I caught the return tram right away and I was back on the ship by 10:30 AM.  I stopped by New Grounds to pick up a decaf mocha latte skinny and a chai latte skinny for Ellen.  While I was there, I caught a rehearsal by the Princess Singers and Dancers - a special treat. 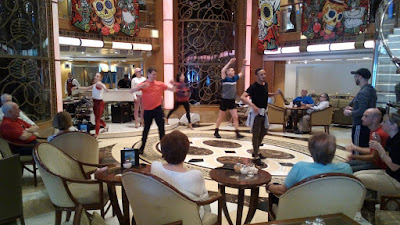 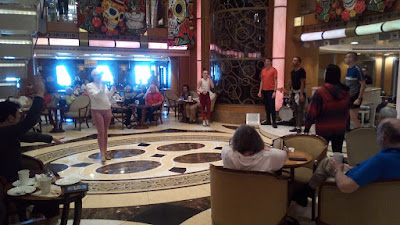 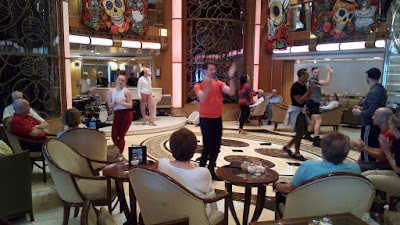 Ellen found some lounge chairs up on Deck 14 by the railing and we stayed there for a while even though it was quite breezy.  We moved to Deck 15, which was also breezy and now we are in the cabin settling down before dinner.

I was out on Deck 7, when the pilot disembarked the ship.  Not as much drama this time. 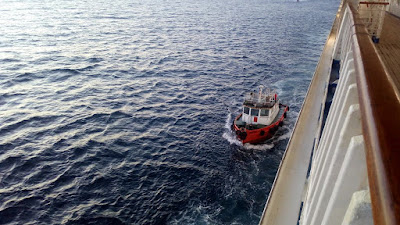 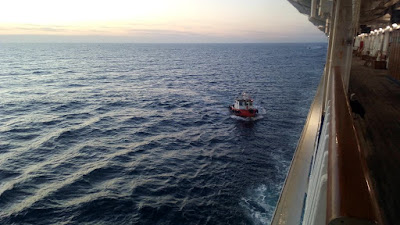 We had, without making reservations, dinner in the Michelangelo Dining Room. I had the Eggplant Parmesan appetizer (good), the Minestrone Soup (very good), and the Seared Salmon with Eggplant Caponata (steamed peppers) (not good). I had to order the Fettuccini Alfredo as backup.  The cheesecake and coffee rounded out the dinner.  Ellen had the Salmon without the Eggplant and a Cesar Salad.  Ellen liked her salmon more than I did.  The safe and tasty choice is the always available broiled salmon.

Comedian/Impressionist Mike Wilson is the Headliner today – we opted not to go as we just heard him on the previous cruise.  Instead, we caught the end of the seminar on Pablo Picasso in the Explorers Lounge and then, after not finding a good place to sit and read, headed for our comfortable cabin.  I finished “The English Spy” and was very happy about the way the book wrapped everything up.
In our stateroom, the booms and shimmying have started but the intensity was not nearly that of the Hawaii run with the exception being an occasional big “boom”.
I am sure we can ride this one out.
Posted by Hal T at 8:47 AM