Grand Cayman is a tender port and the anchor went down around 7 AM – not too much anchor so I am assuming that this is a shallow anchorage.  Grand Cayman is the home of banking (hiding your money), turtles, stingrays, and expensive food.


I slept better last night – the room was quiet and the seas smooth.  At 7 something, just as the sun was coming up I went up to the Oceanview Café, grabbed a pancake, cottage cheese, sour cream, and marmalade and grape jams, along with some scrambled eggs and walked over to the much quieter and less crowded Aqua Spa Café for a peaceful breakfast.  This is the way to go in the morning.


The best place to be today was the Solarium – the ship is at anchor (along with the Liberty OTS, MSC Meraviglia, HAL Nieuw Statendam) so there is very little breeze out on the open decks. 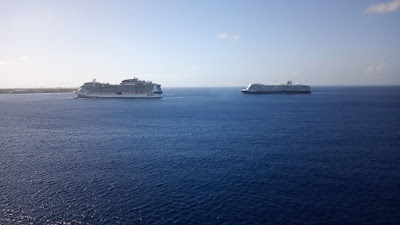 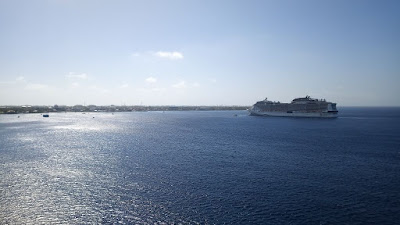 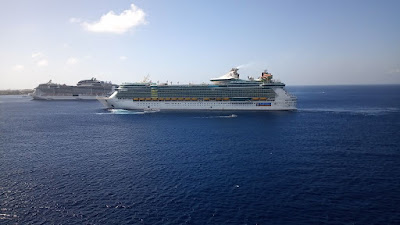 The Solarium works well if you open a nearby window to vent some of the chlorine vaporizing from the pools.  We stayed there most of the day.


We took a break for lunch in the Oceanview Café – Cheese and Spinach pizza, a Cesar Salad, and a scoop of tuna salad followed by blueberry frozen yogurt. Ellen had the pizza and tuna.  We shared a coke we purchased back in Ft Lauderdale.

I took pictures of the sail away from Deck 4. 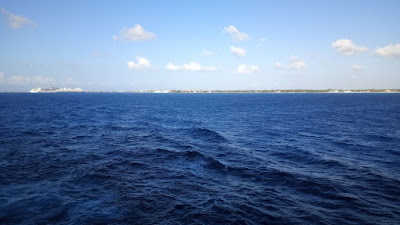 We continued our stay in the Solarium until dinner – at first, we were going to go to the buffet but we wound up at the Opus Restaurant – Ellen had the broiled trout and I had the broiled salmon.  She liked her trout and my salmon was OK.  The tomato chickpea soup was good but the foo foo garden salad was just OK (iceberg or romaine only, please).  I had apple pie (no ice cream) and Ellen had the chocolate lava cake with pistachio ice cream.


We did not attend the show tonight – “Elysium” – because we had seen it before and it was loud.  Instead we spent some time in Baccio and then moved to the Ensemble Lounge.  The Velvet Duo did not repeat its nightly song list but tonight, some of the songs were repetitive and too long.  We left their set early and went to the room for the night.


There is a little movement of the ship and some creaks and thumps related to the motion.
Posted by Hal T at 9:22 AM