The Oceanview Café opened at 6:30 AM this morning – I guess people want to get in that early morning parade.  The place was busier than usual but I still got a nice window table.  I had my usual great breakfast and wasn't bothered as much by the screaming lady.  I am continuing my breakfast at sunrise routine. 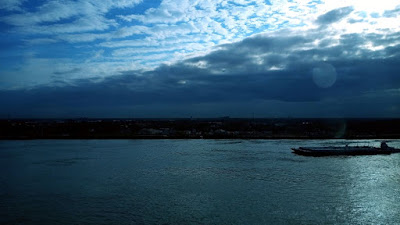 I checked my Mardi Gras Parade app that tells you the status of all the Mardi Gras parades and saw that the two big parades (e.g. Proteus Krewe) are in the late afternoon.  The excursions to these parades (balcony viewing or standing) were over the top so we are going to try and see the town on our own.  The weather is not great - intermittent sprinkles - but, at least, it is warmer today.


We planned our walk with the destination being Bourbon Street in the French Quarter.  We disembarked around 10 AM and exited the terminal (which had no maps or tourist information as we had been told) and walked through the taxi area onto Julia Street. 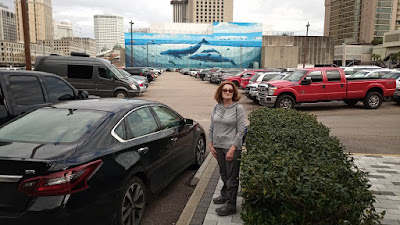 A couple of blocks up we turned right onto Convention Center Blvd.  You can see the ship behind the River Walk Shopping and Outlet Center 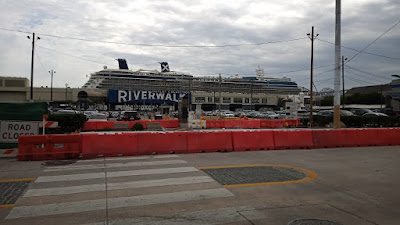 (there is a Carnival cruiser here today as well) and you have to cross the Blvd to get to a sidewalk (construction on the other side and cars are running along this street).  We crossed Poydras Street (where the Hilton New Orleans Riverside and Harrah’s Casino are located).  on Poydras, we ran across an installation called "Brave Girl". 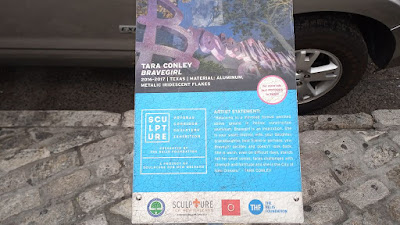 We continued to Canal Street, which is four lane major boulevard, and turned left. Canal Street is one of the streets bordering the French Quarter.  We chose to turn right onto Royal Street.  The street was already busy with pedestrians – some in costume – others wearing the Mardi Gras head feathers and lots of folks with beads.  We continued a few blocks on Royal – some folks were tossing beads from their balcony – I almost caught the beads but we got our first beads (there were beads everywhere for the taking). 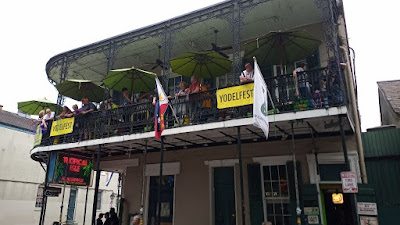 From Royal St we turned left to Bourbon St – the iconic center of the French Quarter.  Bourbon Street was full of locals and visitors and all the stores and bars were open – the big sell was “3 for 1 drinks”.  I do believe some folks were drinking in the street. 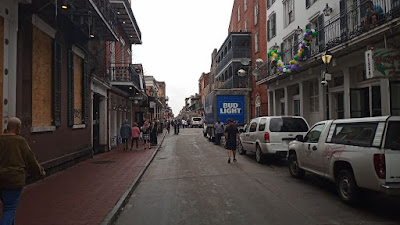 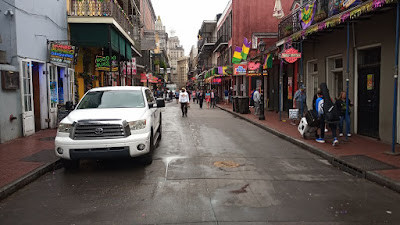 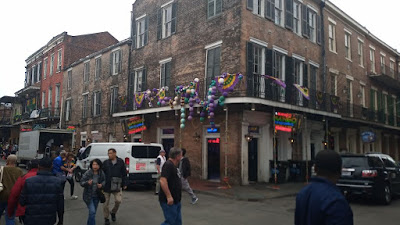 There was a significant police presence in the Quarter. 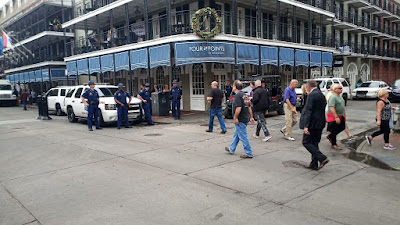 We continued on Bourbon Street and found the World Famous Pat O’Brien’s Garden – the home of the Hurricane.  I had been here before on business trips but never in the day time.  My real goal was to use their bathroom – other places on the street did not let people use their facilities – even our old friend, Subway, told us their bathrooms were out of order.


The big guy guarding the entrance to Pat O’Brien’s said I could use their bathroom, which was located just inside the entrance.  I did and then a server asked us if we wanted to sit down.  We did because later on this place would be mobbed and no seating would be available.  We got a nice table in their courtyard and I ordered a Hurricane ($9.00) – it came in the signature plastic cup. 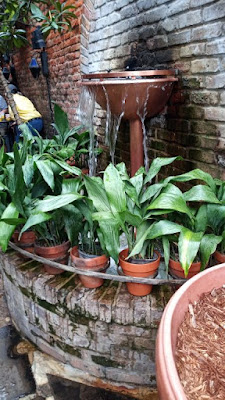 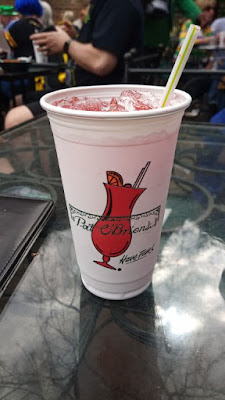 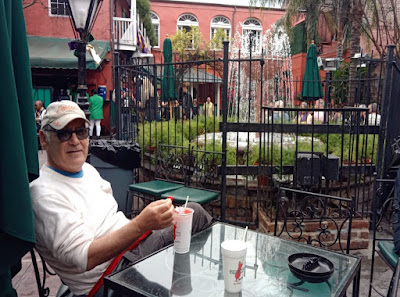 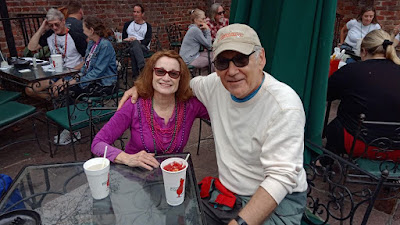 A Hurricane is turbocharged fruit punch (rum, passion fruit juice, and orang juice) with enough alcohol content to confirm you are drinking a real drink. The Hurricane was really good and no one was rushing us out of there.  The other patrons were all having some kind of food with their drinks – maybe beans and dirty rice.  We finished our drink and continued down Bourbon Street.  More people and more human statues and more costumes and lots of beads.

We stopped at Music Legends Park, a fantastic memorial plus eatery/bar that honors the all time greats of jazz and New Orleans Music.  Here I am with Fats Domino, Al Hirt, and Pete Fountain. 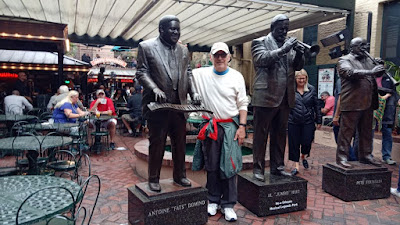 I had one specific goal in mind - that is, to find where NCIS New Orleans is filmed.  I used Google to find it and came up with St. Ann’s Street as the location of the fictional NCIS Office – Google Maps game me the location, which was only a couple of blocks away.  When we got there, there was another couple also interested in the show.  I took some exterior shots – the NCIS plaque was gone – but it was the place. 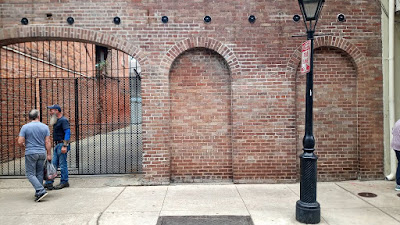 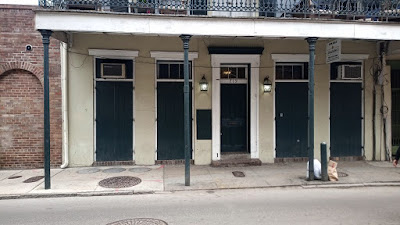 The other couple said they were also going to visit “Two Tones”, the bar owned by Dwayne Pride in the show.  It was a little further on so we opted not to go there.


We spotted Louis Armstrong Park up the street and decided to walk there.  It turned out to be further than it looked so we did not actually go into the park.  Even on this side street, houses were decorated for Mardi Gras. 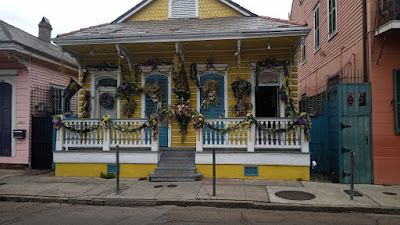 At that point, my pedometer has already clicked off 6000 plus steps so it seemed like a good idea to head back.  We turned toward the river and walked back on Decatur Street.  We stopped in at a Walgreens to pick up some cough syrup and a six pack of small Cokes then continued our journey.

Just past Café Du Monde, there was a concert going on at a park by the River.  The “Zulu” Krewe drew a huge crowd and there was a group playing some Motown favorites. 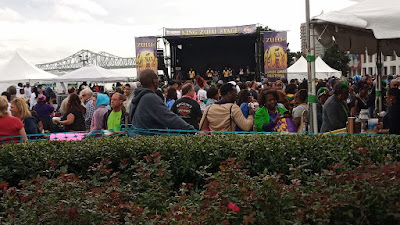 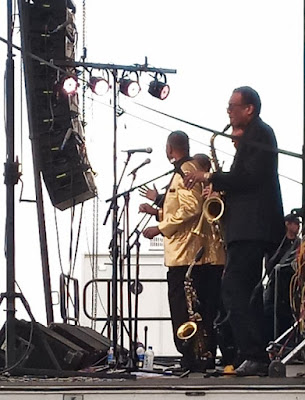 But the real treat was the marching band that was coming straight at us.  We got some nice shots of the group in their costumes. 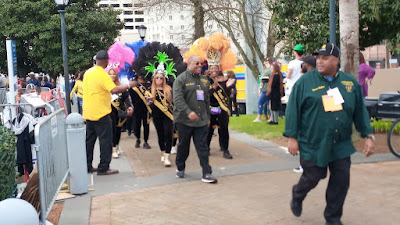 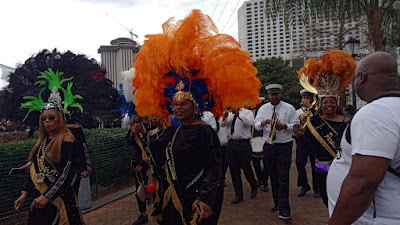 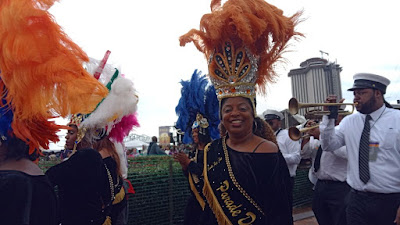 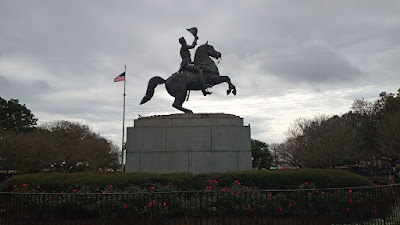 and the magnificent St. Louis Cathedral. 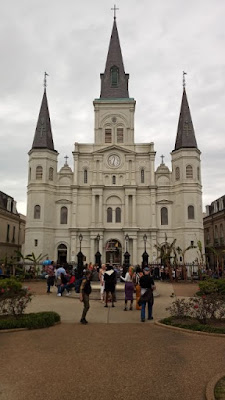 We exited the park at the far end and wound up right along the river.  We went inside the River Walk Mall and checked out the shops – just like the ones at anyone’s local mall.  We exited the mall and planned to return tomorrow to revisit the shops.


We walked toward the ship along the river but it took some twists and turns before we could find the entrance of the cruise terminal. 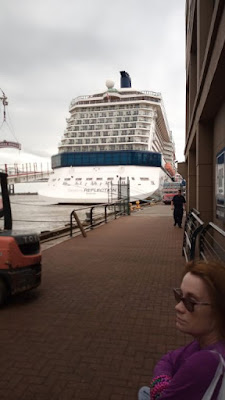 Back on the ship, I checked my pedometer and we had done more than 14,000 steps – my legs and feet ached but it was quite a journey around New Orleans.


We had lunch in the Oceanview Café and Aqua Spa Café and then found some nice seats in the Solarium.  I started “The Last Widow” by Karin Slaughter (a Will Trent Novel) but decided that I didn’t like it (all about paramilitary groups, domestic terrorists, and abductions).  I returned it to the library and got a new book, “The Murder Book”. By Jonathan Kellerman (an Alex Delaware Novel).  I used to listen to these in my car but it’s been a long time.  The book is interesting – involves a cold case.


The Opus Dining Room offered trout tonight so we went there for dinner – Ellen had the trout and I had the chef make me some spaghetti with tomato sauce, to which I later added a piece of broiled salmon – they were both good.  We didn’t stay for dessert tonight. 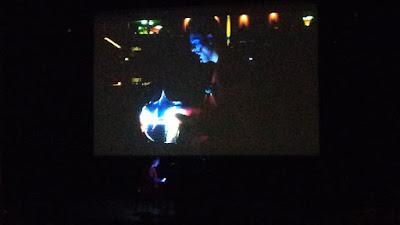 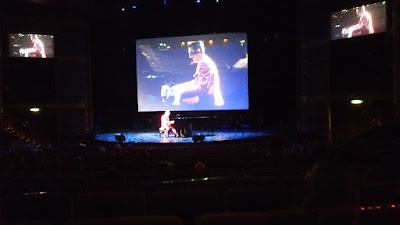 His hairdo had changed and he was wearing a Joker like Red Suit but he was funny, sang well, and was totally unhinged playing the piano (from every possible position).  He had a miniscule crowd as everyone was in New Orleans chowing down and getting drunk.  Still, very entertaining.


Being tired and having no quiet place to go, we went to the room.

I used sanitizing gel to disinfect our collection of Mardi Gras beads - you don't really know where they've been.  The jewel of the collection was the necklace from Pat O'Briens. 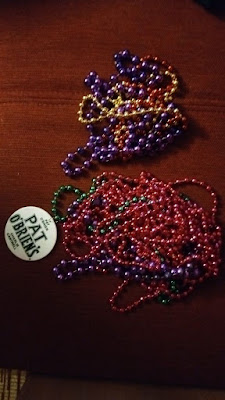 After thinking about it again, I revisited “The Last Widow” but rejected it a second time.  There was something about the book I didn’t like but it’s still checked out – who knows?
Posted by Hal T at 1:59 PM