I had another nice breakfast this morning even though the Oceanview Café was a little more crowded than usual.  Passengers were getting ready for a full day of excursions and/or dining on the island.


We are docked at the International Pier 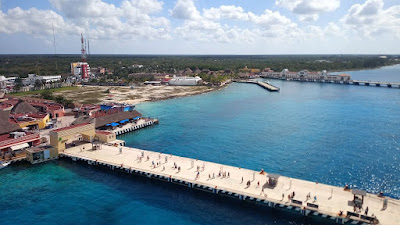 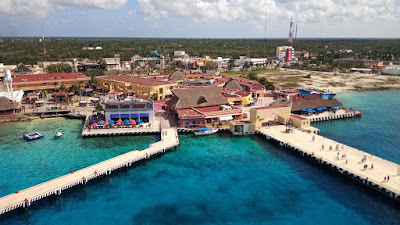 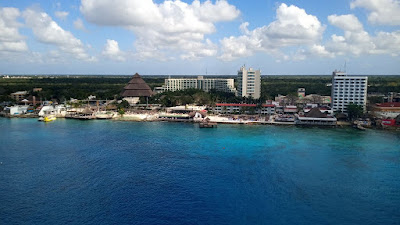 today along with our companion, the Symphony of the Seas. 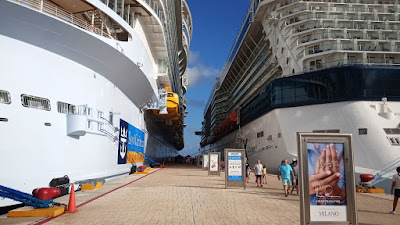 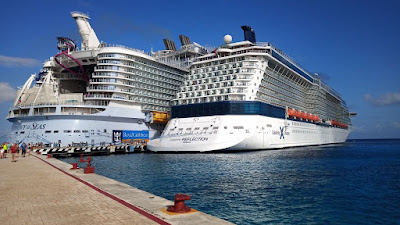 The Puerto Maya pier, a couple of miles away, has two Carnival Ships, the Fantasy and Dream docked (another Carnival ship is supposed to be there but it may be out of sight). 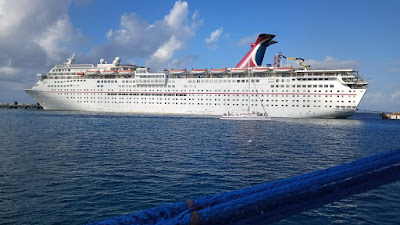 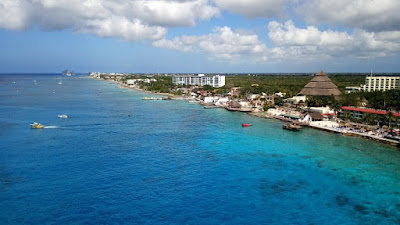 a grand total of seven ships here today.  There will be a lot of tourists wandering the streets of Cozumel today.


Ellen is not tip top today so she is not going to go ashore.  I am still going off ship to walk around the town but plan to be back before lunch. Again, I turned right onto the main street, Avenida Rafael Melgar, 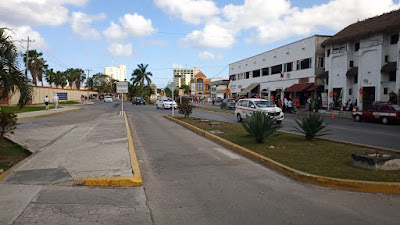 while most of the tourists took a left toward the only town on the island, San Miguel de Cozumel.   A few block down, I ran into an old friend, a Carl's Jr Restaurant. 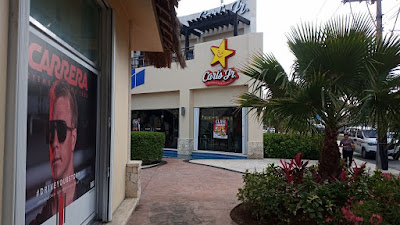 We don't have any of these back home but when we lived in California and Texas, we spent a lot of time in Carl's Jr (the huge and deadly fish sandwich was great).

I stopped in at the massage spa we always go to.  It is located down an alley just when the commercial area ends. The spa was open and we negotiated a price of $40 per hour.  When I asked to use the bano, she pointed to the wooded area at the end of the alley.  I said, NO, NO, and she eventually took me to a nearby shop that had a real bano.  This to do should have been a heads up.  Although the price was OK, the therapist didn’t understand any English and her technique was not great and showed no training.  The spa seems to have changed owners, had a whole new crew, and the facility itself did not seem as nice overall.


On the way back, I passed by the Puerto Maya Terminal, where Carnival Ships dock. 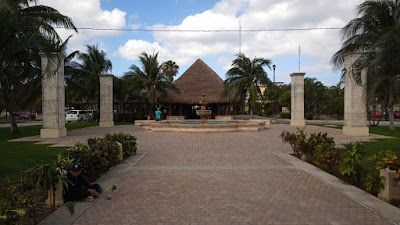 I also got a nice picture of the big ships docked behind the terminal wall. 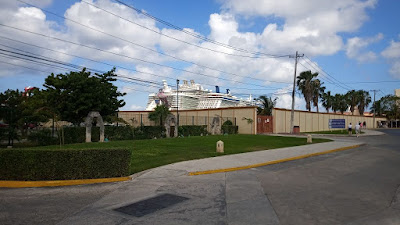 I came across an interesting street sign that was designed for people with short term memory issues. 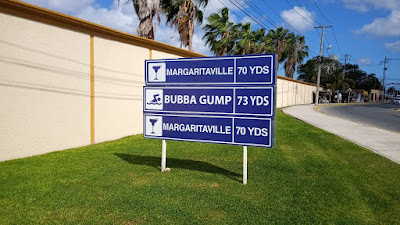 There was a vendor selling caps and other trinkets on the street adjacent to the port entrance (you can see the stand in the background above).  I stopped to pick up a cap for $8 – the poor vendor had no customers and I wanted him to have a sale.  But the real selling point was that the cap fit, which is a rare occurrence.


We had lunch from both the Oceanview Café and the Aqua Spa Café -  Tuna sandwich and salad for me and assorted Spa stuff for Ellen.


Ellen had scored a cabana in the Solarium so that’s where she was going to be for the duration of the day.  I was in one of the funky seats in the Solarium overlooking the pier complex.  From there I got a fantastic panoramic shot of Cozumel and San Miguel in the distance.

We had dinner again in the Oceanview Café – I had another pasta made for me – vegetables and tomato sauce – it was OK but not as good as the garlic pesto pasta I usually get.  The garlic rolls are the best.


We passed on the production show, Euphoria, tonight. We have seen it quite a few times and it is a loud production.  We opted instead to go to the Ensemble Lounge to catch the end of Velvet Duo’s set and tonight’s performance by Linda Capewell.  The two singers were both a bit loud tonight so we didn’t stay for all of the second set.


We went down to the Opus Dining Room and ordered Kosher Meals for tomorrow – a NY Steak for me and a duck for Ellen.


I found out that my final talk would be at 9:15 AM tomorrow so we went to the room so I could go through the slides as I would not have the time in the morning.