A beautiful day at sea on our way to Costa Maya, Mexico. 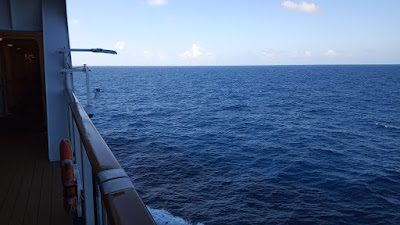 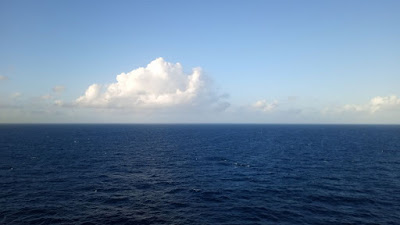 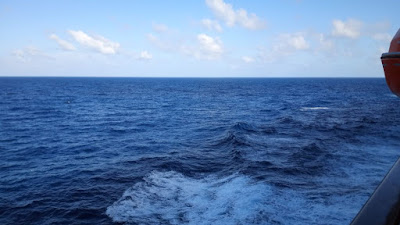 I had much too much food for breakfast today – two pancakes with chocolate syrup and banana slices plus two (he cook talked me into it) fried eggs and a biscuit.  I didn’t know it at the time but this was part of the plan as I am giving my third talk at 1 PM today so I won’t be having a typical lunch.  Needless to say, the breakfast was very good.


I went to the Aqua Spa Café to go through my talk – ”Forensic Detectives: The Search for Jack the Ripper” – and try to shorten the talk by removing some slides.  I was only partially successful but I did see some important prompts that I should have been using but haven’t and will include them today.  I tried to make an iced mocha coffee using powdered cocoa mix that was an epic fail.  I’ll need to wait until I get on a ship that will make them for me.


I got to the theater at 12:30 PM and there were about 10 people scattered around the place. 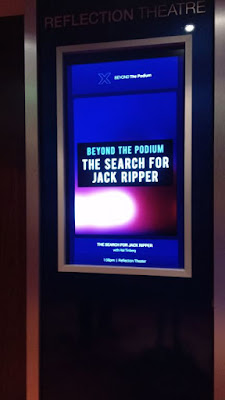 I got a wonderful intro by Sam from the Entertainment Department (the best intro in all my career) and at start time, the theater was about half full – maybe north of 500 people.  This is a success as the pool deck was saturated and people had already started occupying seats in the sun and Solarium when I went up to breakfast.  I was followed by the movie, “Judy”, so some people were streaming in at the end.  No matter.


We did not spend the day in the Solarium but instead found some nice lounges on Deck 5 Forward, on the non-smoking, and today the shady side of the ship.  While it was a little breezy, it was warm and watching the water go by is one of the reasons we like sea days so much.  I made good progress on my book – one case solved and one to go – and the sea is very relaxing.  No muzak either. Tonight is the second Evening Chic Night of the cruise so we are dressing up a bit. We also pre-ordered kosher NY steaks for tonight – we just found out they were available last night.  Not a lot of people are following the dress code tonight but no one is wearing shorts.  We had reservations and were assigned table 417 but there are two passengers who need that table for medical reasons so we asked to be switched to 517, also on the rail and a good table.


While waiting for the steaks, I had the plantain soup (lukewarm but good), and the garden salad and red cabbage (good).  Ellen had a mushroom appetizer and salad.  The steaks arrived wrapped in tinfoil, which needed the assistance of our waiter to remove it.  The steak was a thin cut with grill marks on it but it had been steamed or nuked after the fact.  It was good but not good enough to order again.  I had some fries with mine and Ellen has steamed veggies.  It took a long time to unpack this entire dinner so we opted out of dessert and coffee and tea.


Tonight we are seeing Ashlie Amber, the small but loud vocalist with huge hair (kind of like an Afro-Mohawk), that we last saw on Celebrity Edge.  She was so loud on that ship that we only stayed for a couple of songs into her Whitney Houston tribute. She is a very small person and in her chat with the audience indicated that she was a multisport athlete including volleyball (she is about 4 ft something so I don’t see too many kill shots by her).  We braced for super loud but she was only medium loud tonight (I felt there was something wrong with her mic as she sounded squeaky without the tonal quality she had on the Edge).  We lasted several songs into her set including the Olympic Theme – “One Moment in Time” – until she got into a song that was repetitive and loud (I did not recognize it and I am familiar with a lot of Whitney’s music).  That was our signal to go – a few people left early in the show and we saw a man in front of us covering his ears so we are not the only people uncomfortable with the noise. 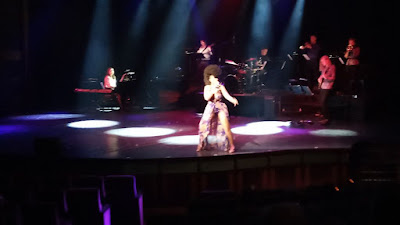 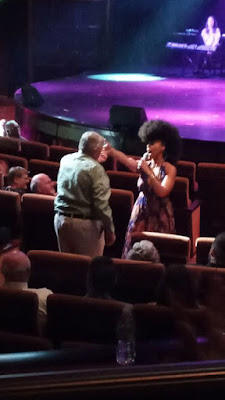 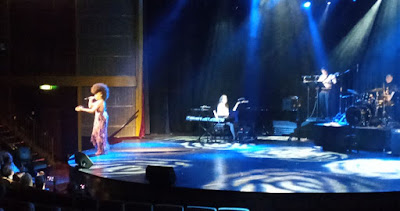 Our next stop is the Ensemble Lounge where we are going to hear Linda Capewell, an Aussie Songstress (FB moniker).  This is the first time we are listening to her as she is usually on after 10 PM.  She was terrific – smooth, on key, easy to understand, and sang at a comfortable volume.  She plays guitar, looked like a singer from the 70s (hippie), and sang many of our favorite songs, including a wonderful version of “Hallelujah”.  We will be seeing her again and might even have to stay up a little later to do so.  What a pleasant surprise – maybe on the next cruise, she will have a different schedule. 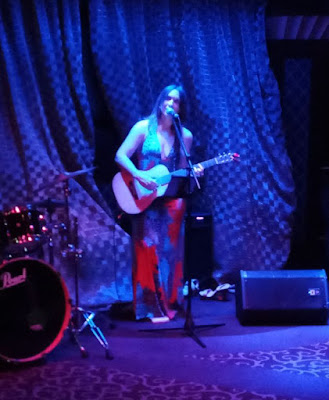 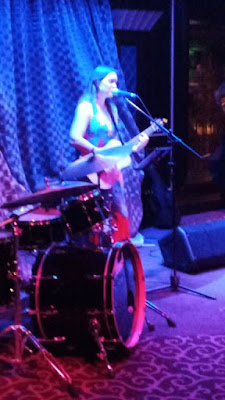 Next stop the room but not after picking up a tasty lemon tart at Baccios.