Although the ride was seriously bumpy, Captain PJ got us to San Francisco on time.


I was up at 6 AM when the ship arrived (the thrusters always wake me up).

San Francisco was still dark when our ship arrived. 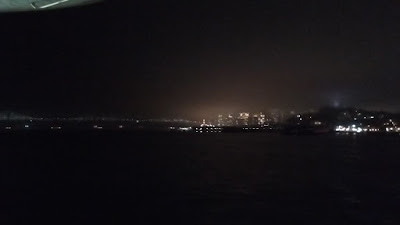 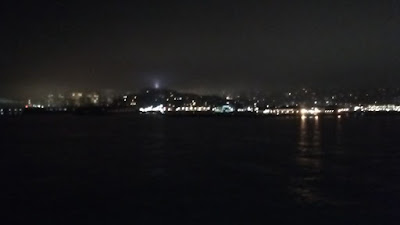 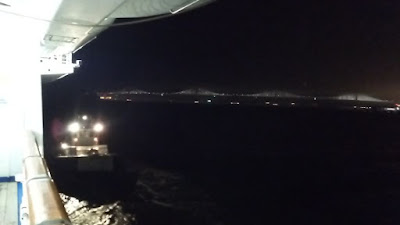 It was actually warm enough to eat in the Solarium annex, a good thing because Horizon Court was slammed.  I had a little bigger breakfast, oatmeal, waffle plus fixings, and a biscuit.  The breakfasts have been good the entire cruise.  I brought Ellen breakfast – no lox today so French Toast, some scrambled eggs, and fruit.  I dropped off the tray and went to New Grounds to get the last remaining coffee.  I waited about 30 minutes to get the Chai Latte for Ellen - everyone was zeroing out their coffee cards - even though they had four people working the machines, it was still slow.

We dragged our suitcases to the Explorer’s Lounge and didn’t stay long as Rojo 2 was called.  We walked off and whizzed right through immigration and then off to our bus to SFO.  The busses were leaving as soon as they filled up and that was not long.  It took a long time to get out of the wharf area and on to the freeway.

We got off at the American Terminal – used the kiosk to check in and waltzed through TSA Pre-Check in a few minutes.  Our gate is D12 and our plane won’t be here until 1:17 PM.  Our flight on AA2634 doesn’t depart until 2:38 PM and that is about four hours from now.  We found these great seats near the sundries store – multiple power plugs, nearby bathrooms, and super comfy seats.  We would not leave our seats until time to board.

Ellen put together a gourmet lunch from food from the ship – it’s OK, all of the stuff was processed and no fruit or veggies so it's kosher to bring them off the ship per USDA rules.  She made me a great tuna sandwich and made some lox and cream cheese sandwiches for herself.  We bought a diet coke for $3.49 and some Cool Ranch Doritos for $3.29 and had a terrific lunch.

While we were waiting in the couch area, I noticed a higher than usual number of face masks worn by people walking by.  I texted the kids back home and they told me that China was dealing with some kind of virus outbreak and maybe that was the reason for the masks.  San Franciso does get a lot of people visiting from China.  This is what happens when you don't watch any news on TV on the ship and have limited internet only at the ports.

We went to the Gate at the scheduled boarding time of 2:18 PM – our first class requests didn’t work out – we were number 40 on the list.

SFO has windows with sun scattering mesh - you can see through it but you can't take any pictures through it - hence, no shots of our jet at the gate.

Just as we were getting ready to board, the desk announced that a mechanical issue had popped up on the inbound flight and maintenance was working on it.  They expected a delay of at least 20 minutes.  Well, just about five minutes later, we were boarding.  This was, by far, the slowest, boarding process we have witnessed in hundreds of flights.  We were standing in the jet way for at least 20 minutes and even on the plane, people lumbered down the aisle in slow motion.  I remarked to one of the flight attendants that this was so slow and she had no explanation. People simply seemed in no hurry to put their bags up or sit down.  Our 737-800 seemed new but many of the features had been taken away – no screen (and the American App did not work well) and the bathrooms were the smallest I have ever seen (the flight attendant said I would be lucky to survive the bathroom).  We are aisle across in Exit Rows 16C /16D.  Roomy enough.  I did find a bin for my carry on but people boarding in the last groups got their bags gate checked – doesn’t seem fair does it - $30 bucks at the kiosk and/or with an agent and free at the gate.

In spite of all of this, we took off about a half hour late – we were first in line, which helped.  The flight was smooth – I got my comp Bailey’s (two of them) – really good.  And played some games on my phone and Kindle – no movies.  Other people loaded movies on their screens and that was their entertainment.  I should load some Netflix movies on my Kindle the next time I fly American.

A few minutes of light chop and a couple of encounters with the mini bathrooms and we got to Chicago 15 minutes early.

Our bags came out right away.

I called a cab and he arrived quickly – our cabbie was almost unintelligible but he was the safest driver we have ever had – never went over the speed limit.  He may not have spoken English well but he did get us home.

The condo was cold and the smoke alarm kept chirping (it needed a new battery backup).  I tried to change the batteries without success so I cut the power to the alarm for the night.

A long time on Grand Princess but, in spite of the terrible sea conditions, Hawaii and Mexico were great.
Posted by Hal T at 7:01 AM