An ucky day at sea.

So ucky, in fact, that I didn't bother to take any pictures today.  I did, however, use a cruise tracking app to track the ships location. 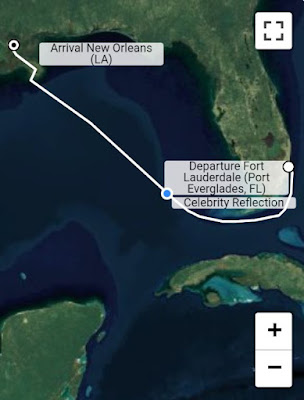 Breakfast was very unusual – no muzak in my section of the Oceanview Café.  The cottage cheese was not out so I had to remind the staff to get it.  Pancake plus cottage cheese, sour cream, jams, and scrambled eggs comprised my typical breakfast.  The food was good and made even better by the absence of the screaming lady.  I decided to share my thoughts on noise with one of the suits and told him that a quiet breakfast was really a bonus on these ships and he should share that information with his bosses.


I also spoke with Guest Relations about the noise on the ship and she said she would speak to the “Broadcast Manager” (responsible for the volume) and the “Music Manager” (responsible for content).  I told her that there were only two places on the ship that weren’t unbearably noisy – the Solarium and my cabin.  That shouldn’t be the case, she agreed, and wrote all of this down on her pad and promised to take it up with the folks responsible.  As with the suit up in the buffet, I doubt anything will change – noise is in the culture – but at least I was able to make my position known.


My first talk (I will be giving five on this cruise) - “Forensics and History: The Mystery of the Romanovs” is scheduled at 1:00 PM in the Reflections Theater.  I went to the Aqua Spa Café to sip coffee and tune up the talk and to download the key points into my memory banks.  I think I improved some items and put some more key information into the talk.  We’ll see how that turns out later.


Because of the tight schedule for the talk, lunch was in the Aqua Spa Café.  I had one of their turkey sandwiches and avocado minus the turkey.  I swapped in some of their tuna and it made for a good sandwich.


I was introduced by Rich and had a good turnout for the talk – over 300 overall or so.  The talk ran on time but the annoying thing was that the movie “Judy” was at 2 PM (the second time that has happened on these cruises) so people started piling in about 10 minutes before I was done. No one attending the talk left so the movie folks had to find seats in an around my attendees making for a disruptive situation.  There is nothing that can be done about it so it is what it is.  Rich spoke to me before the talk about including two new titles this time round for the 117 in-transit passenger so they would have some new material.  I told him that would be no problem.


I gave up on “Old Bones” – a book about the Donner Party.  It’s the first book by Preston and Childs that I did not finish.  I started “Blue Moon”, the latest Jack Reacher Novel by Lee Child and made good progress on it during our afternoon in the Solarium. There’s a bit of morbid comedy going on in this book – something you don’t always find in a Reacher novel.


We set up a pretty wild dinner for ourselves in the Opus Dining Room.  Last night we ordered kosher meals – two hot dogs and a backup hamburger for me along with the appropriate challah rolls and a second attempt at duck.  My meals are prepared meals (like airline meals) and the duck is cooked in the kitchen (in foil).  We had salads and I had the corn soup (good).  The duck was first undercooked and then overcooked so it is still a challenge.  My meals were not as difficult to unwrap as they have been in the past and the hot dog was pretty good (although salty).  The hamburger was overcooked.  The hot dogs are a viable option.  The wait staff worked nicely with us to remove all the excess packaging material before we started eating.  We also got a challah (unsolicited) and parve cheesecake, that was quite good.  I had my coffee black.


We passed on “December 63” and could not find a quiet place so we spent a little time in the Solarium and then our cabin.


The Celebrity Today indicated that my talk tomorrow – “Forensic Detectives: The Search for the Titanic Child” - would be at 9:00 AM.  I was too tired to look at the talk tonight and may not have the time tomorrow.


Clocks move back one hour tonight to put us on CST for New Orleans.