A smooth night and some sleep – still got up early.

I did walk the 1000 or so steps from the cabin to Horizon Court even though it was a bit chilly this early in the morning on Deck 7.  I did it for the pictures. 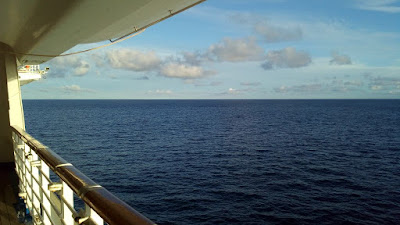 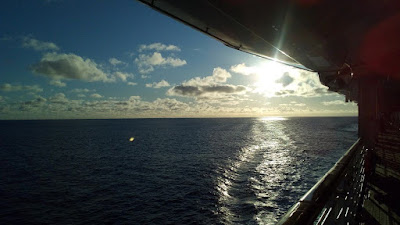 I was in Horizon Court by 6:45 AM.  This morning, our last day, I had pancakes with cottage cheese and sour cream topped with strawberry jam and orange marmalade – also some scrambled eggs and a biscuit.  Coffee service wasn’t so good this morning and I got three cups of coffee myself. My coffee has to be continuous and hot.  All in all, the breakfasts on this cruise have been consistently good.


I went to New Grounds to get my iced decaf mocha skinny and found a nice window seat in Alfredo’s Pizza.  I went through my talk for this afternoon and added some stuff on Mitochondrial Eve (a passenger request) and separated some slides dealing with the “Princes in the Tower”.


We checked out the lunch menu in the restaurant and found nothing so we went to Horizon Court for lunch – a salad and cheddar cheese wraps (I only nibbled at them) along with a handful of fries.  Not much lunch today.


I got a second iced coffee before my talk and headed for the Vista Lounge for “Forensic Detectives:  Identifying the Famous and Infamous”.  I got there around 1:00 PM and the lounge already had quite a few folks.  I didn’t see the AV techs – they were actually behind the curtain.  We set up using another of their laptops – so much easier and no freeze ups.  By the time I started the talk, the venue was full – the only seats not taken were at the extreme sides where you cannot see anything. 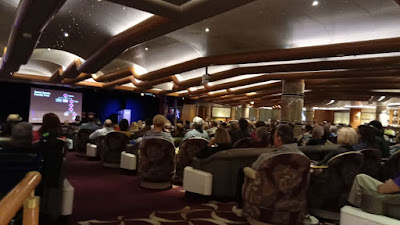 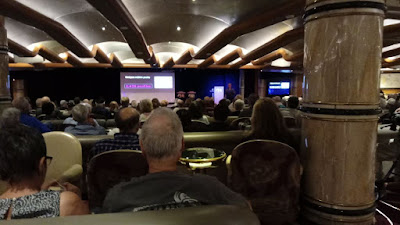 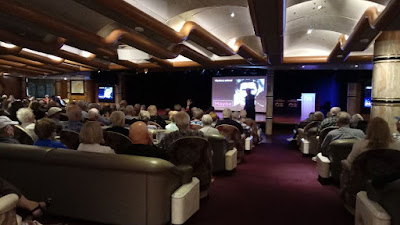 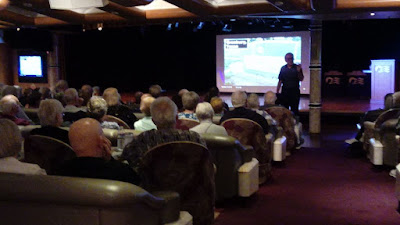 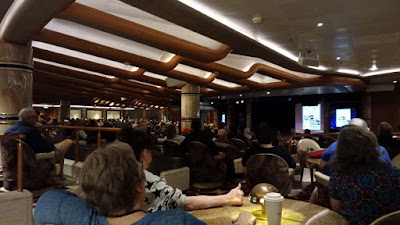 Side screens helped out and people were standing in the back. It was a good crowd considering I was at the same time as the Book Club and the final Art Auction. I got a very nice round of applause and the end. I also had my picture taken with a passengers and had a lot of people thanked me for the presentations.  Also, I found out that about 90 percent of the people there today had perfect attendance.  Overall, a very successful lecture series.


We found out earlier that a second passenger required a medevac – this time a chopper was going to meet the ship as we passed San Diego.  The Grand ePrincess changed course to put herself in range of the helicopter.  The medevac took place during my talk and the captain came on a couple of time to issue instructions and warnings.  At one point, he got very angry with a couple of passengers who disobeyed orders and tried to snap some pictures from their balcony.  They should have been made to walk the plank.  The passenger was evacuated successfully and the ship continued to San Francisco.  There is time to be made up and fast speeds mean more chop.


Because it is cold outside (and cold in a lot of places inside), we wound in the Deck 7 walk through, an area with ideal temperature.


We had dinner in the Michelangelo Dining Room – I asked my waiter for the spaghetti and tomato sauce that I had had earlier in the cruise and he was able to get it done for me.  The dish was once again excellent and, combined with the always tasty Baked Potato Soup, made for a nice dinner.  We have had good service in the restaurant throughout this cruise.


Even though it is packing day, it is a busy day for shows.  At 7:30 PM, we went to the Theater to see “Born to Dance”, one of their newest and best shows.  This would be the third time, we have seen this show and I could detect some subtle changes in the shows (for example, “You Can’t Skip the Beat” was shorter).  There were some numbers I have never liked (some from “West Side Story” for example).  The narration by current and past Broadway Dancers is always interesting.  It’s an entertaining show overall and the only time, you get to know the names of the eight dancers in the troupe.


Ellen finished packing after the show and we were going to leave our bags out.  However, we are in the crew area and I wasn’t sure where to leave them – Guest Services told me not to leave them out but rather to do “walk off”.  We went round and round with that and we finally decided to walk off after joining our group in the Explorer’s Lounge at 8:45 AM.


Two more things to complicate our final night on board – the clocks move backward tonight (to put us on PST) and the seas are rough.
Posted by Hal T at 1:08 PM