Another warm day in Cartagena.


I once again assembled my breakfast in the Oceanview Café and transported it to the Aqua Spa Café for P and Q.  The rub this time was that the coffee machine in the Spa wasn’t working.  After I finished eating, the machine started working intermittently so I was able to get a cup of decaf.  I probably won’t do this progressive breakfast thing anymore since everything is cold by the time I get settled – it’s me and the screaming woman for breakfast from here on out.


In the absence of any "gotta go" excursions, we are planning to take a cab to Cartagena’s Old Town and check out the colonial buildings and find me a nice Colombia beer.


At around 10:30 AM, we hopped on the shuttle bus that would take us to the Visitor’s Center and from there we would hire a cab.  That plan changed somewhat as I ran into a portion of the overhead bin as I tried to sit and bonked my head.  I didn’t think much of it until I checked and it was bleeding.  We got back off the bus and I put some ice laden cloth on it to reduce the swelling.  We stayed in the bus loading area until the bleeding mostly stopped and then took the shuttle to the Center.  At least I got a picture of the Marella Discovery 2, docked here today as well. 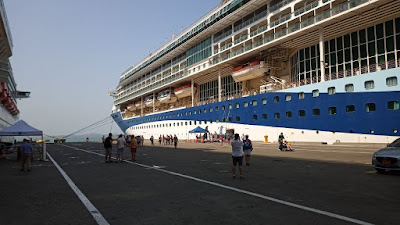 At the Visitors Center, we took picture of the flamingoes, parrots, and peacocks (some of which were up in the trees) before getting our cab. 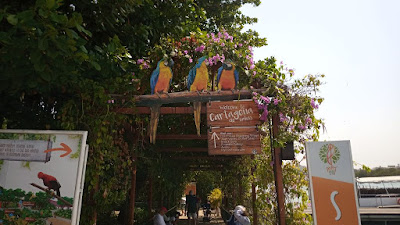 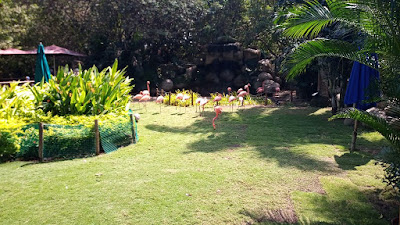 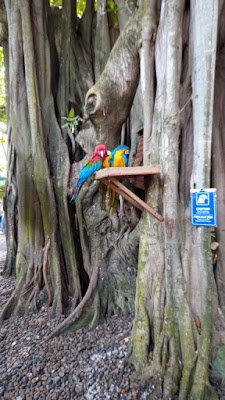 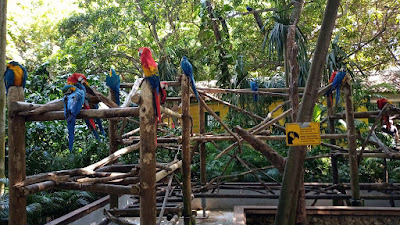 We alsmost got an unobstructed view of Reflection from the Visitors Center - that pirate ship is always there. 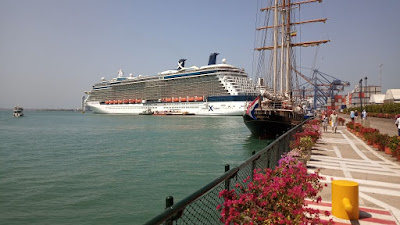 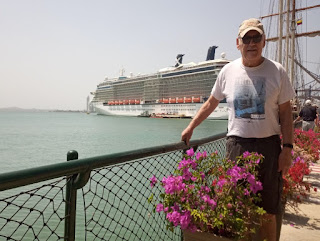 We tried to avoid the taxi queue by exiting to the street to find a cab, but, this time, we were stopped by a guard, who directed us back to the queue.  The starting price was $10 pp to the city, then a total of $15 for two people, and the final bid (reluctantly accepted by the dispatcher and not the cabbie) was $10 for two people (what we paid the last time we went to the city).  The cabbie grumbled to the exit guard and then told us that he had to pay $5 just to park and wait for customers.


The traffic to the city was awful and it all converged on the bridge connecting the island of Manga, where we were docked, to the mainland.  Manga is still pretty run down but there are new buildings and several banks and restaurants that have sprung up in the few years between our last time through this neighborhood.  We have been back to Cartagena frequently but it has been a while since we went to the city.


We finally merged into the one lane on the bridge and entered Cartagena – the streets were narrow and filled this day with lots of locals.


Because it took so long to get to the city and today was a short day and it was so hot, that we decided to go back to the ship – the cabbie understood and the price for the round trip would be $25.  He took us on a little tour of the city and pointed out, in minimal English, what we were seeing.  As we made our way along the narrow streets, we came across a street filled with umbrellas, yes umbrellas. 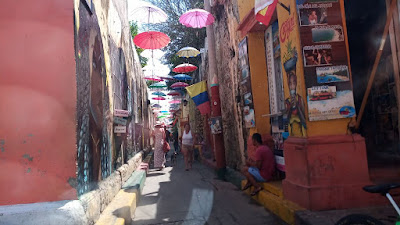 We stopped at a Fort near the bridge and got out for some pictures of the Cartagena skyline, which he called “New Miami”.  He also made sure I took pictures of the canons used to ward off pirates back in the day. 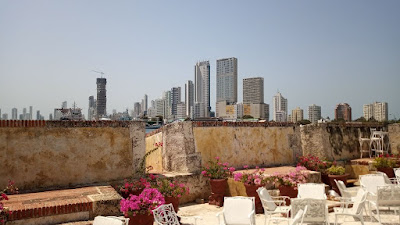 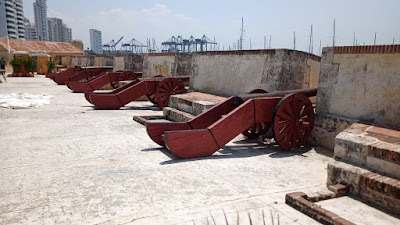 Once back at the pier, we spent some time at the Visitor Center shops – they don’t have soft caps so no deal there.


We took the shuttle back to the ship and found some nice seats in the forward end of the Solarium.  Some of the view was obstructed by the Marella Discovery 2, a UK based cruise ship about half our tonnage. 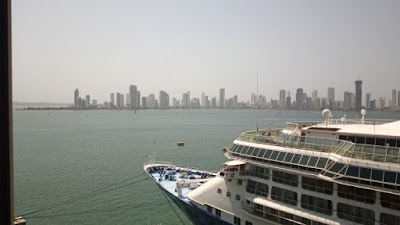 
I deviated from my usual lunch by ordering a veggie burger from the Mast Grill (Deck 15 Forward).  It takes 10 minutes of prep so Ellen and I went to the Aqua Spa Café where I had the salad I put together from the Oceanview Café.  My veggie burger was well done and good – it wasn’t a Garden Burger or Impossible Burger (for sure) – my guess was a black bean burger.  It was still very good and I’m going to have another before the cruise is over.


We spent the rest of the day in the Solarium – again the only quiet spot on the ship but also the coolest spot temperature wise.


The Grand Foyer was decked out minimally with Valentine stuff (not like the Crystal Symphony where you couldn’t walk without stepping on a decoration). 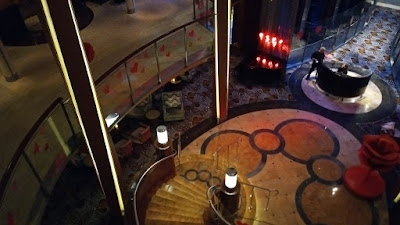 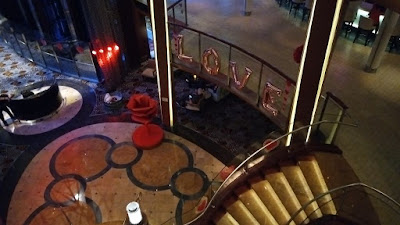 Also, at dinner, all the ladies were given a very nice long stemmed rose. (photographed alongside the wonderful chocolates we get every night) 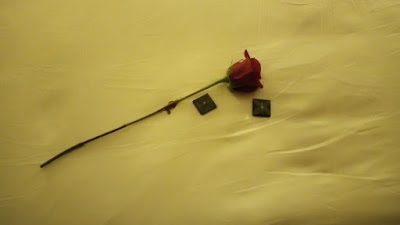 We changed (actually wore jeans (nice ones) for the first time on a ship – it’s acceptable on Celebrity) and had dinner in the Opus Dining Room.  We had made reservations including a table choice the night before.  HMT: Eggplant Parmesan appetizer, spring rolls (mini but good), potato leak soup (again very thin) and a kid’s pizza, which turned out to be focaccia pizza (a one off order I concluded).  Ellen had the same but lox instead of pizza. We shared a cheesecake with peaches for dessert.


We went to the Reflection Theater for Showtime – “Intimate Broadway Cabaret”. 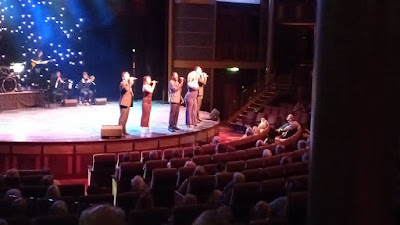 We saw this show the last time on Reflection and really liked it even though the songs were obscure.  The show this time was totally new with new songs from the big Broadway Hits.  The six singers (also dancers in some cases) started off with a medley from “Les Miserables” (I Dreamed a Dream, On my Own, The Stars, One Day More, 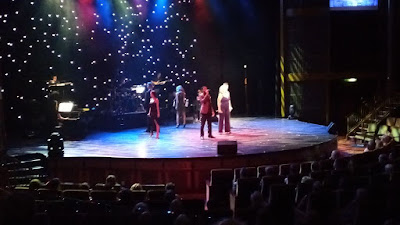 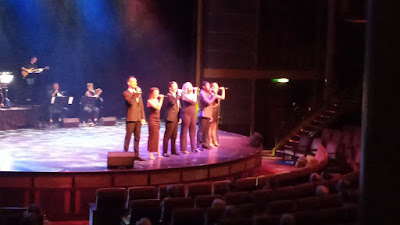 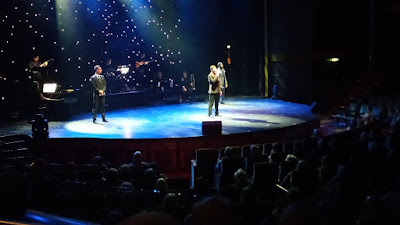 Other songs included: On Broadway, 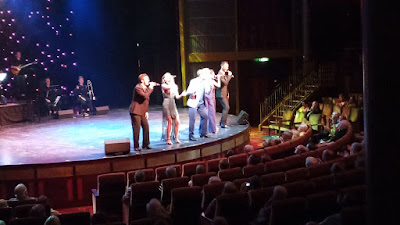 Stand by Me, Life of the Party, In My Fashion, 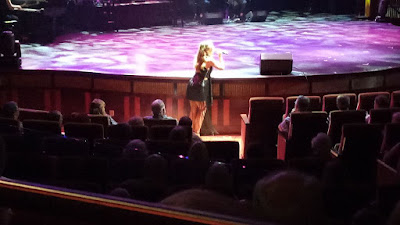 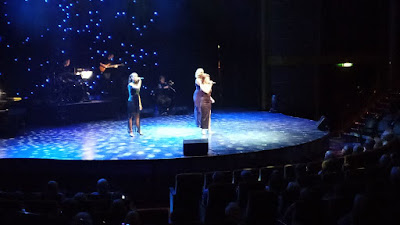 I Don’t Know How to Love Him, 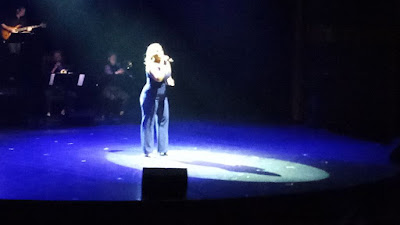 Fade Out (from Bridges of Madison County), and Falling In Love With You (the Finale). 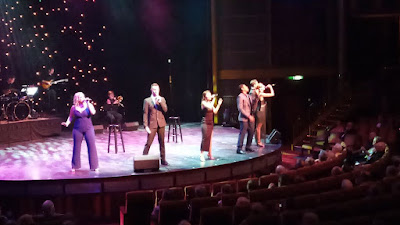 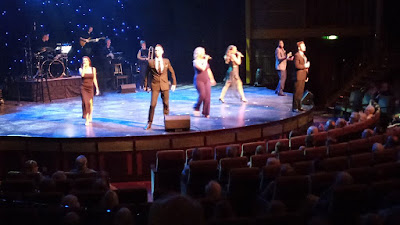 This was the best show we have ever seen on a cruise (I posted this publicly on Facebook) and this group of singers was the best we have yet seen.  Every one of them could sing.  We are going to see this on the next cruise and get closer so I can get better pictures.


We wanted a quiet place to read so we went to the deserted Solarium – it was perfect. The water feature light show was in full glory.


The room was our next destination.


The ship is basically smooth but there are incredibly loud bangs in our room.  These are not coming from the sea but from inside the bow of the ship – maybe things are being moved or something is being fixed.

The bang/crash noises stopped about 10 PM so maybe sleep would be possible.
Posted by Hal T at 10:36 AM