It is getting cooler as we head North toward the Azores. 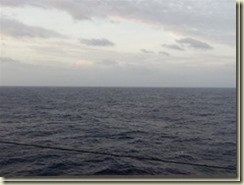 After breakfast, I went to the Galaxy Lounge to hear Dr. Stephen Wessley (Destination Lecturer) present “In Search of Columbus”.  Let’s just say our versions of the same topic are very different.

I stayed for the next lecture on Leonardo da Vinci by Bulent Atalay.  He is a scientist and his talk was very academic and interesting; he wound up with too many slides for the allotted time so he zipped through the final series.

The two lectures took us right up to lunchtime in the Lido Cafe.  Today, the theme was Asian and there were many selections.  Aside from the all important salad, I had some veggie Spring Rolls and Garlic Eggplant.  It was all very delicious.

We found some couches on the pool deck (napping and reading venue).  Still making progress on “Inferno” and I have figured out what the serial killer is up to.  We took a little break to check out the ice cream flavors of the day (BTW – they serve Ben and Jerry’s Ice Cream on this ship).  We saw a guest holding what looked to be a smoothie – actually, it was a milk shake.  We ordered two butter pecan milk shakes (with only half the amount of ice cream) and they were creamy and good even so.  We spoiled our dinner in class. 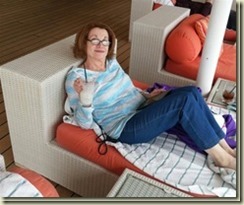 Before dinner, we did six laps on the Promenade Deck – about a mile and half.  Probably, burned off the shake with the walk.  It was much breezier than the last time I walked now that the wind was coming across the bow of the ship.

Before dinner, we listened to the Ruby Bamboo Trio in the Starlite Lounge.  The pool lead singer spent her whole set singing in the dark.  I would have thought that flipping on an overhead light would be straight forward – nope – all that singing and solo dancing in the dark. 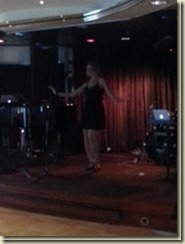 Dancing and Singing in the Dark

We are gong to be breaking new ground tonight for dinner.  We found out earlier that the ship has kosher items available for dinner.  They are frozen and kept separate from the other food and cooked in a separate kitchen.  Last night, we ordered two rib steaks for dinner and tonight, the big reveal.

We sat with the couple we met at Embarkation and another couple from Arlington Heights.  I ordered the soup and salad off the menu but the steak came on China and not in bubble wrap.  It much have been two pounds of perfect steak (can only imagine what that would cost in  kosher restaurant).  I had fries with mine and Ellen had a bake sweet potato with hers.  I can only say that mine was delicious with the only issue being that it was slightly undercooked.  A fruit plate for dessert along with a soy latter completed the perfect meal.  Ordering and getting the meal was seamless. Wow.

We went to the 8:30 PM Production Show - “Route 66”.  Lots of high energy dancing to songs from the 70s.  Not really a plot driven story although it involved a ride from Chicago to LA along Route 66, making stops at places associated with a type of music.

The most exciting part of the show was not part of it at all but a “Code Bravo” that came about two thirds of the way into the show.  “Code Bravo” means a fire.  The show stopped and we were told that one of the incinerators was not venting smoke properly and smoke had engulfed the crew quarters and the Crystal Plaza area (we could smell it).  After about 10 minutes, the show went back on and completed.  The Captain came on minutes later to explain the whole situation.  Everything was under control and we were maintaining course toward Punta Delgada.  A little extra excitement – I should mention that many people left the theater at the “Code Bravo” perhaps getting prepared for something worse.  The show was entertaining, especially the dancing, but the mics were a bit over-amped. 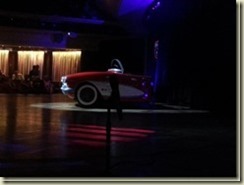 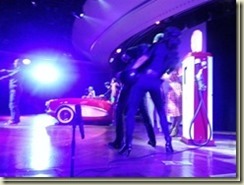 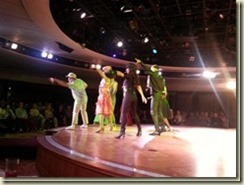 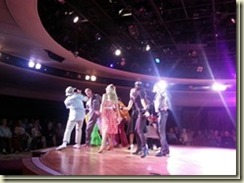 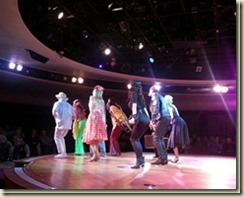 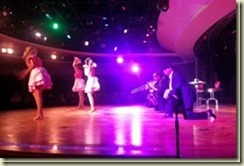 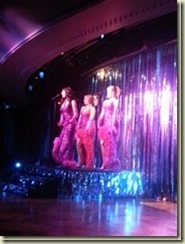 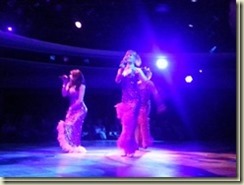 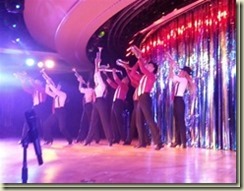 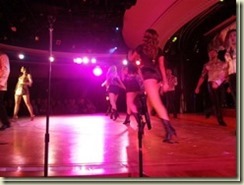 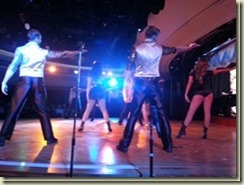 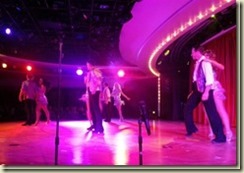 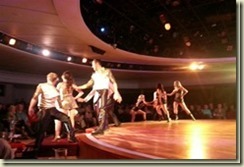 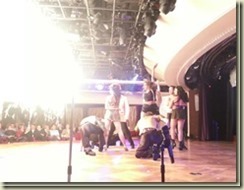 We went to hear Mark Farris’s second set in the Avenue Saloon.  The Code Bravo had sucked most of the enthusiasm out of the place.  We didn’t stay long.

Still choppy out there.