We are on our way back to Brooklyn, but there is still plenty of cruise left to enjoy.  It is still warm outside and the seas are calm. 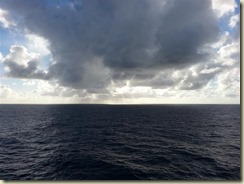 It will be a very interesting morning as my next presentation has been scheduled opposite Roger’s presentation.  There will certainly be some decision making on the part of guests.

To tune up today’s talk, I spent some time in Sir Samuels – they have finally gotten the iced decaf mocha latte thing down. 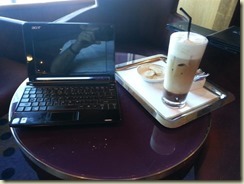 Ellen joined me at the coffee bar – she thought that one of the other guests there looked familiar and went over to chat.  It was the shorter of the two Opera Boys, who was on his computer.  They talked for a while – he seemed as friendly as his partner.

At 10:30 AM I went to Illuminations to get ready for “Forensics and History:  The Search for the Unknown Titanic Child”.  I estimated the theater at 80 percent or about 400 people – a pretty respectable turnout in light of the scheduling.  The presentation ended up on time – I may have forgotten to mention that it is easy to tell your pace in Illuminations as there is a clock in the back.

After lunch, we had the whole afternoon to just veg out.  So this is exactly what we did up on Deck 7 – a light breeze and mild temperatures made it a perfect day. 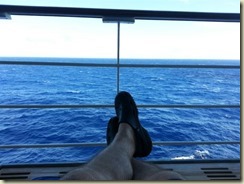 Watching the Waves Go By

The ship had put out a Holiday Cupcake Display in the King’s Court – a great way to ruin your dinner. 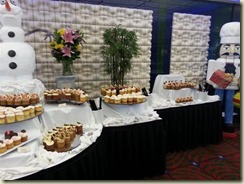 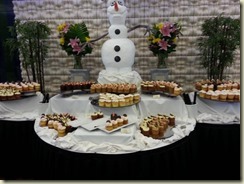 Tonight is the big New Year’s Eve Gala on board QM2.  We haven’t had much success in getting our picture taken together but a mirrored elevator helped out. 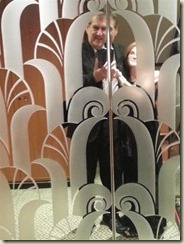 The Britannia Room was all gussied up for New Year’s Eve.  There were balloons everywhere – including on the tables.  There were also New Year’s gift on each table – this year it was a neat book on the 175th Anniversary of the Cunard Line. 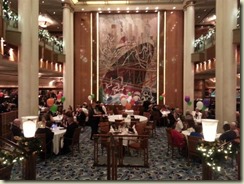 The dinner was very good and we took our New Year’s Even pictures (as we had done in 2011).  I even tried on the celebratory hat (three sizes to small). 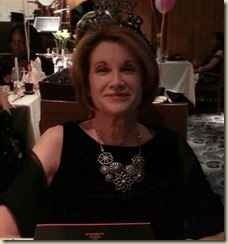 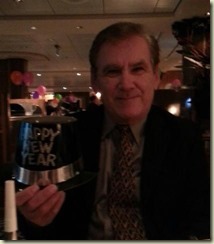 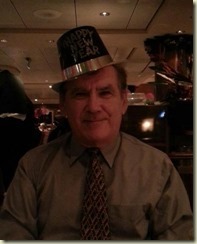 The ship really has two New Year’s Eve Celebrations.  Up in the Golden Lion Pub, the Brits on board celebrated the new year on London time.  You could hear the cheering while other people were having dinner.  The Ship activities took place in the lavishly decorated Queen’s Room. 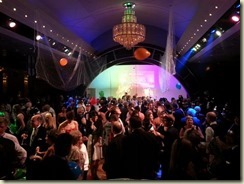 Seating is difficult to come by but we did get two seats with a view of the floor.  As we drank our champagne and the countdown approached, we chatted with some guests.  We tried our hand at a selfie with some success. 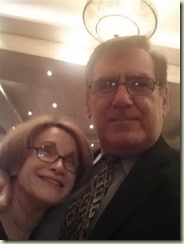 The Countdown began and the clock struck Midnight – and the massive balloon drop smothered the dance floor. 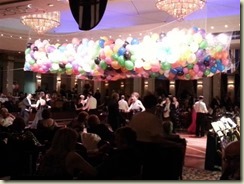 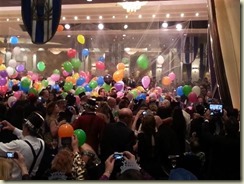 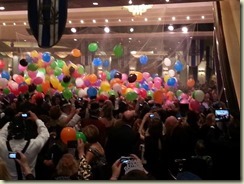 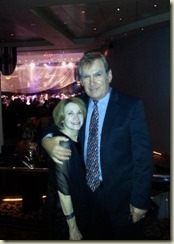 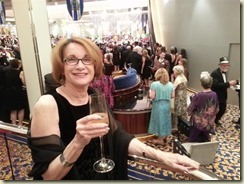 Looking Terrific in the first minutes of 2016

A long day and a terrific finish – a New Year has begun.