Cool but clear outside… 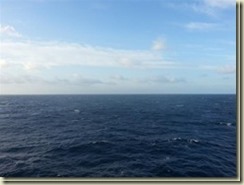 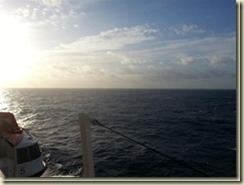 Sunrise from the Room

Have to hustle a bit this morning since I am first up in the Galaxy Lounge.  The venue was closed until 9:40 AM when the AV tech arrived.  In this theater, the ship’s laptop is located in the back adjacent to the sound engineer’s studio.  My biggest concern was the ability of my remote clicker to move the slides.  I gave it a try and it was spotty so the tech gave me their clicker, which apparently, had better range.  Standing near the right edge of the stage, it did seem to work.

Lecture 3 - “Forensics and History:  Mystery of the Romanovs” – 10:00 AM – started on time after an introduction by Shane.

The theater was about 95 percent full – approximately 420 people.  I had some trouble with the sound system at the outset and their clicker worked sporadically (very frustrating and it did lengthen the talk a bit).  I did finish on time – the edits did help - but felt rushed.  The feedback was positive – Shane had me move a little further back to let people see the screen, which probably affected the performance of the clicker.  I plan to be by the Podium next time and will put new batteries in my clicker to hopefully increase range. 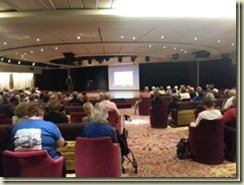 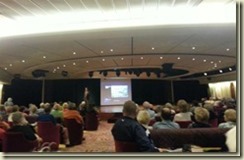 We stayed in the theater to listen to Special Interest Lecturer, Brian Gendece present “Director-Choreographer Jerome Robbins: The Price of Perfection”.  Instead of lecturing, Brian shared film clips of Broadway Shows and interviews with Jerome Robbins”.  I would have liked to hear more about the man himself.

We went to the Lido Café for lunch.  Again the salad bar was very good but my favorites by far were the Jalapeno Poppers (just perfect).  I also tried Tuna Wraps from the Trident Grille but the Poppers were still the best.

The afternoon was a combination of reading on the deck or up in the Crystal Cove (many of the seats outside were unavailable due to the winds and temperature).  We also rested a bit in the room (the constant chop has not resulted in much sleep) before dinner.

Tonight our dinner companions were a retired physician and his wife from Iowa.  They turned out to be very nice and interesting dinner companions.  Our kosher meat tour continued with veal chops, preceded by a nice tossed salad.  This is the first time I have ever had a veal chop (hard to believe).  It was cooked perfectly but I was not a fan.

In Town Tonight featured a variety show – Mark Merchant (Comedian/Ventriloquist), a dance number by Natalie and Chris, one of the dance duos on board, and a second show from Neil Lockwood.  An enjoyable show, especially the humor of Mark Merchant.

The rest of the evening was spent reading in the Crystal Plaza accompanied by the mellow music of pianist, Bruce Johnson. 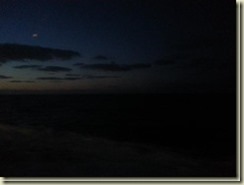