Port Background. Tortola is the largest of the British Virgin Islands.  Columbus came across the USVI and BVI archipelagos on his second voyage and named the chain after the 11,000 Virgins associated with fifth century martyr Ursula.  The name is derived from the Dutch name of Ter Tholen (after an island off the coast of the Netherlands), which became Tortola once the British settled the area.  The population of Tortola is 23,908    with the largest city being Road Town (population 9400).

Our pleasant, tropical, weather streak continues.  We are here with two other ships, the NCL Escape, and an unidentified Aida ship (you can tell from the lips painted across the bow – very interesting).  The Aida ship is anchored and running tenders to Road Town. 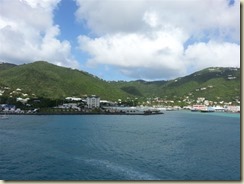 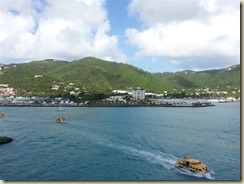 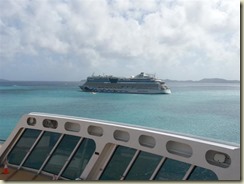 Ellen is on tour in the afternoon – “Scenic Tortola” – so we are going to spend the cool morning checking out what’s gone on in Road Town since we were here last. 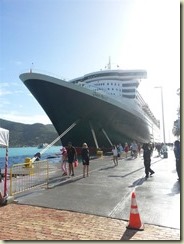 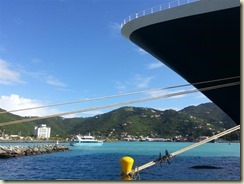 On our previous visit, the area around the pier was essentially a multi-block flea market with vendors – shoulder to shoulder – hawking all sorts of things.  I was looking for a new cap from Tortola so I was looking forward to the hunt.  As it turns out, the flea market has been replaced by a new tourist center and some new shops.  So, probably no cap on this trip.

It must have rained just before we got here because there was mud everywhere and the sidewalks had not dried completely yet.

The town is small and we were able to walk just about all of it in about an hour – it still consists of a few grocery stores and banks and other small shops.  Not much has changed in the town from what I can recall.  The spas on Tortola are scarce and very pricey – not going to be a pamper destination for us.

When we completed our exploration of the town, we went to the beach at Road Town.  The beach here is not the quality of Philipsburg or St. Thomas and there is a pipeline of some sort running the length of the beach.  There was no one on the beach today. 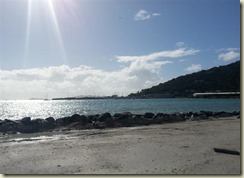 It was however, a good spot to take a picture of me and the ships. 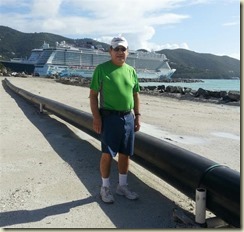 We returned to the port and couldn’t resist taking the picture below.  We never take these kind of pictures in front of our own ship’s display but this seemed like a fun thing.  We got some objections from the NCL folks but we were able to accomplish our mission. 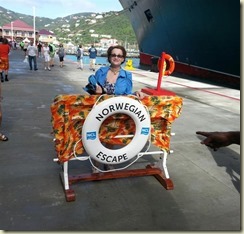 In the afternoon, Ellen went on her excursion and I spend a relaxing day on board on Deck 7.  Below are pictures from Ellen’s tour.  The most dramatic shots were from view points in the hills overlooking the bay. 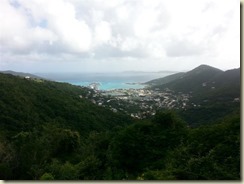 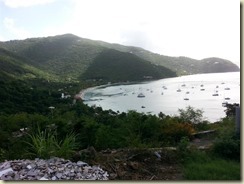 In the two shots below, you can see the bay and the three ships visiting today.  You can also get a sense of the size of Road Town. 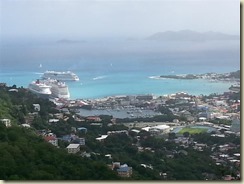 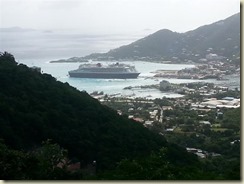 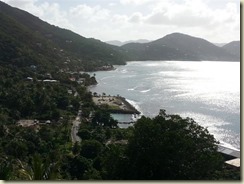 Ellen’s tour continued around the island and more view points. 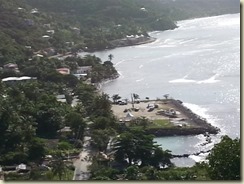 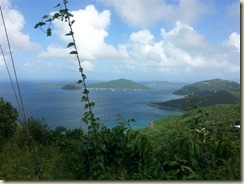 A View of the other BVIs

The tour also visited some spots near Road Town and environs.  The mural that described the history of the island was also on the itinerary (we have seen it before). 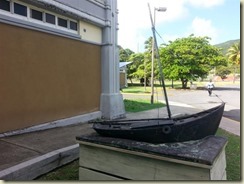 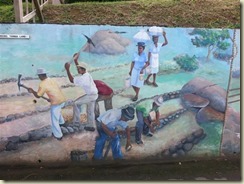 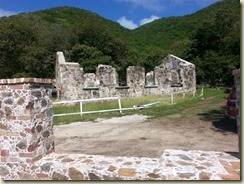 The tour also visited a shopping area known as Pusser’s Landing. Lots of nice boats and yachts and stores. 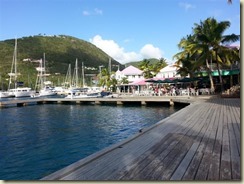 Dinner in the King’s Court Buffet and some evening lounge entertainment completed our day.