The constant chop continued through the night and, so with the time change – it is a zombie fest in the Lido Cafe this morning.

I went to the Galaxy Lounge at 10:00 AM to hear Michael Fopp present “Got Any Gum, Chum”, which dealt with the effect US soldiers had on the British Soldiers in WWII.  The time change separated the hardy souls from the sleep-in crowd this morning.  The presentation had some very interesting videos depicting the interaction between the locals and the US fighting men.

I had planned to stand on the right of the stage so that my remote mouse had better direct line of sight with the laptop.  To my glee (yes), the AV group may have noted my problem the other day because the laptop was now on stage left.  This meant I could stand next to it with no issues.

For a sleepy morning, the attendance was very good.  We estimated the theater to be about 95 percent full – 420 plus guests.  As I got going, Shane (also introduced me this morning) motioned for me to move forward a bit – I am thinking I was in the shadows and not in position for the videotaping.  The talk had good pace and I finished right on time.  I chatted with a few people afterwards.  Good feedback.

No special theme in the Lido Cafe for lunch today.  Again, the salad was great and this time I ordered a pizza from the Trident Grille.  Someone from the Grille delivered the pizza to the adjacent Lido Cafe.  A very good simple lunch.

I attended General Gadsby’s lecture in the Starlite Lounge (“The Peninsular War”.  He uses an interesting animation application that moves troops around a map.  He also shows some high resolution images of important players in the story – they must have come from paintings.

Ellen picked me up and we went to the Avenue Saloon for our scheduled time for “Magic Castle at Sea”.  There were about 20 guests watching some up close magic – the whole show took less than a half hour.  We were told that our tickets were also good forever at the Magic Castle in LA.  Who knows? 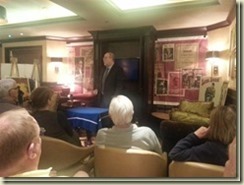 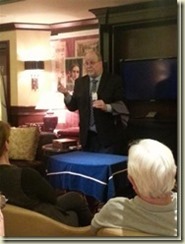 The rest of the afternoon was spent up in the Trident Grill eating area.  The roof was closed so it was warm and cozy and perfect for reading.  About an hour into our stay, we heard a loud banging noise and the roof was opened about six feet.  Now the cold air was rushing in along with the wind and our solarium turned into a blanket and windbreaker area.  I asked a server what was going on and he said a guest wanted it open because they were too warm (must have been a very elite passenger to change the climate for 100 other people).  Well, it got too cold for a lot of people including us so we headed to the room for warmth.

We did not order Kosher meals tonight.  We tried to get reservations for Prego for tonight but they are booked until April 7 (we got a 6:30 PM spot for then).  So, our only dining option was the Galaxy Dining Room.

We sat with just a single couple – the rest of their table had either opted out of dinner or gone to Prego tonight.  The couple was from New York.  I had the pasta dish along with the featured salad of the day (both excellent).  Tried the two desserts – Cherry and Strawberry Tapioca and Cherries Jubilee.  The menu tonight also offered “Stephen Colbert’s Americone Dream” ice cream.  On our way out of the restaurant, we ordered Kosher meals for tomorrow. 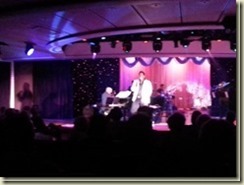 He may look like a linebacker but he’s actually a singer, who originated the role of the adult Simba in the West End Production of “The Lion King”.  He was OK doing songs by Marvin Gaye, Jackie Wilson, and Otis Redding, but he really shined when he did songs from the musicals (“Circle of Life” and “Bring Him Home”).  He showed clips of his West End day, which complemented the show effectively.  His show was longer than an hour – the longest so far on the cruise.  He is clearly a fan favorite since many in the audience already knew who he was.

From the show we went to the Avenue Saloon to hear Mark.  Tonight, the Saloon was celebrating Lucy’s (a passenger) 90th birthday. 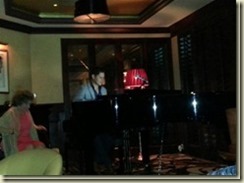 Lucy had been Miss Senior California 12 years ago – Mark brought her up on stage so she could recount her adventurers on her way to this milestone.  All the songs in the set were from 1926.