Not much sleep considering the factors involved.

At 7:00 AM, we went down to the breakfast area to eat – dry cereal, oatmeal, toast, some fruit.  Minimal choices but it was food.

We had signed up for the 11:00 AM shuttle to the port ($12 per person).  The shuttle arrived right on time and 20 minutes later, we arrived at Terminal B, where the Crystal Symphony was docked.  Also here today are the NCL Sky, Majesty OTS, and a Carnival Ship.

We checked our bags after getting our stateroom assignment from the manifest.  We checked in with all of the regular passengers and after passing through security, we were directed to the waiting area and would board by groups identified by color cards. 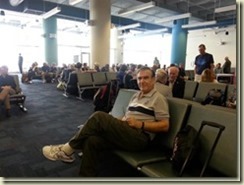 Our wait was short and soon we were on the ship.  The actual checking occurred in the Starlite Lounge on the ship (registering credit cards, photo ID process, etc).  We ran into the Cruise Director, Shane Morely, after checking in (Shane is from Australia).  He told me that everyone involved in entertainment on this cruise would meet tomorrow at Noon for orientation. 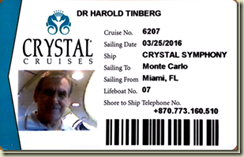 The ship was refitted in 2014 and looks pretty much brand new.  We heard that the Symphony had just come off a charter cruise and had to hire contractors to put it back to its passenger recognizable configuration. 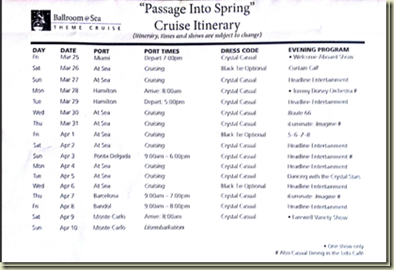 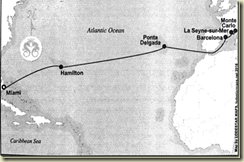 We went to the room to drop off my computer bag and put our valuables in the safe.  We were assigned Cabin 9091 – this is a veranda room on the starboard side aft.  It is a fantastic room with a queen sized bed. 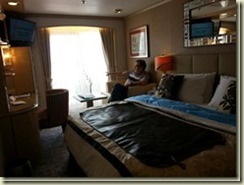 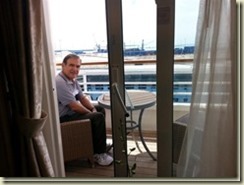 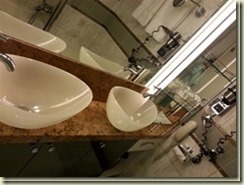 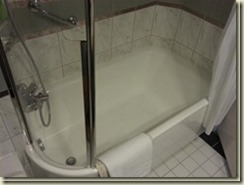 The room has a huge closet, a shoe rack, two types of robes and storage space galore.  The bathroom is spacious (twin sinks) and has an actual full size bathtub.

This is a special PURE Room, meant for people sensitive to environmental factors.  It has been specially treated to kill microbes; all bedding is hypoallergenic, and it has a huge air purification system (A Class II Medical Device) located on the wall above the right side of the bed. It is, without a doubt, the best room we have ever had on any ship.  I found my speaker information packet and it looks like all six lectures are scheduled at this time.  I also got my badge, which lists me as Dr. Hal Tinberg, Special Interest Speaker, Wheeling IL.  I’m supposed to wear the badge at all times to identify myself to the passengers. 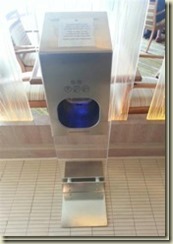 The units use a spray system instead of a gel system – the ship claims that it’s an antiviral spray.

The Lido buffet was not serving lunch so we ate in the Trident Bar and Grille (Deck 11 Aft), – Ellen had a tuna melt and I had a veggie burger (good but not entirely veggie since it was cooked on the burger grill).  The items are made to order so they are fresh and hot.  I also had the soup of the day, gazpacho, which was very good.

After lunch, we met with the Maitre D to see about dinner seating.  The outcome was predictable – no early seating for two days and check back on day 3 for early seating options.  The factor complicating things was that the Lido does not have a dinner buffet.  The only other choice was going to the Specialty Restaurants, Prego (Italian) and Silk Road (Asian Fusion).  We have four free visits to the specialty restaurants so we decided to use two of them tonight.  I waited in line for about 30 minutes and secured a reservation at Prego at 6:30 PM.  Problem solved.

When I got back to the room, Ellen had essentially unpacked.

We walked around the ship a bit to get some idea of where the key venues were.  The back deck had lots of sun chairs but also ash trays.  I did get some nice shots of our neighbor, the NCL Sky, and the Miami skyline. 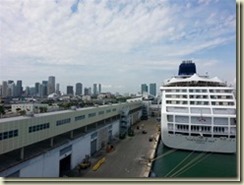 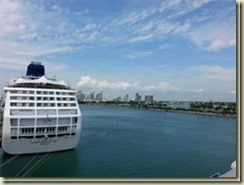 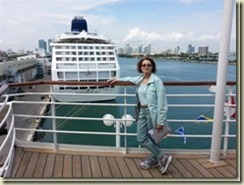 View from the Back Deck

We went back up to the Trident Bar and Grille, where I couldn’t help myself, and ordered back to back Mojitos.  The waiter said it would take a while to get the drinks because he had to go downstairs to get fresh mint.  The mojitos were terrific and we spent some time chatting with some passengers we met while checking in.  I also sent off some Facebook Postings.  While up there, the first of the many ships in Miami departed – the Majesty of the Seas – for a three day voyage to the Bahamas. 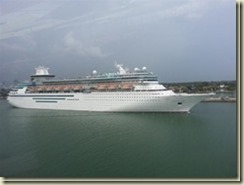 We arrived at Prego’s at 6:30 PM and got a nice table for two.  It seemed like all of the service personnel in the restaurant were Italian and lots of Italian phrases were being tossed back and forth.  I ordered the Pan Fried Branzina, preceded by a Cesar Salad and Minestrone Soup; Ellen had the fish also, along with Caprese Salad, Vegan Ravioli, and Mushroom Soup in a bread basket.  I had the red wine and that put me over the top on my daily alcohol consumption.

The meals were great but we had no time for dessert so we passed and went to the Galaxy Theater (Deck 6 Forward) for the Welcome Aboard Show.  By the time we got there, we could only get seats on the side.

The show, hosted by Cruise Director Shane (outfitted in formal marine gear) consisted of a nice opening number from Chorus Line, followed by both featured dance couples, and closing with a number from Grand Hotel. 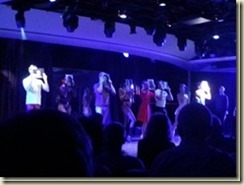 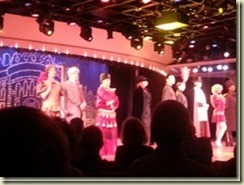 There are about eight singers and dancers, who are all very good.  The lead female, Julie Bell, had a tremendous voice (“Music and the Mirror” and “What I Did For Love”).  The male lead singer, Dennis Dubbin, also had a great voice. The ship does have a six piece orchestra, which accompanies the shows.

After the show, we stopped by the Avenue Saloon to hear pianist-vocalist, Mark Farris (from the Chicago area).  We met him in line while checking in; he spotted us as we walked in gave a shout out to “Wheeling IL”.  He likes to walk around the audience and chat with passengers (many of whom he knows from past cruises).  He handed me the mic and asked me to preview my lecture series.  It was a lot of fun.  I am pretty confident that Mark will turn out to be our all time favorite piano bar performer. 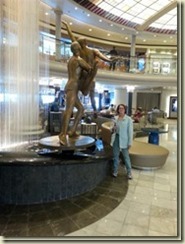 Up on the deserted Lido Deck (11), we saw the Seahorse Pool. 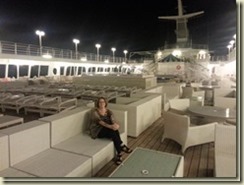 Seahorse Pool on the Lido Deck

We ended up in the Palm Court (Deck 11 Forward), where I had my first Decaf Latte. 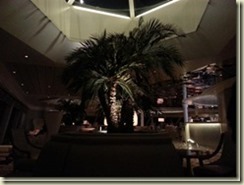 We are moving our clocks forward tonight to Atlantic DST.