Port Information.  The Azores, part of Portugal, consist of nine islands, the largest of which is Sao Miguel.  We are docked in Ponta Delgada on San Miquel, an island of approximately 400 square miles.  Portugal is 900 miles to the East and Bermuda approximately 1800 miles to the West.  The Islands get there name from the huge flocks of buzzards that live here.  Thinking they were hawks, the early settlers named the islands, Acores (Hawks in Portuguese).  The islands were first discovered in 1427 by the Portuguese and settled by a mix of peoples, Portuguese, Bretons, Jews, and Moors.

The Crystal Symphony arrived about two hours early and so quietly that I did not hear any thrusters or engines at all.  We are docked at the Passenger Terminal, Portas Do Mar.

And for the first time on this cruise, there was no chop or shimmy last night, so a good night’s sleep was had by all.  To celebrate, we had room service this morning – waffles, scrambled eggs, an omelet, blueberry-walnut pancakes (truly wonderful and not available in the Lido), coffee and tea.  It came right on the dot at 7:30 AM. 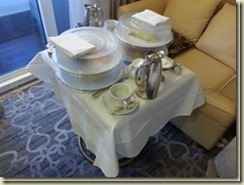 It is Sunday, and we do not expect much to be open in Ponta Delgada.  We are planning to re-explore the town, having been here a number of times.  To get to the town you have pass along a walkway lined with coffee shops and some restaurants (even a Burger King).  This is also where the independent tour operators make you run the gauntlet.  We bypassed them and went up a minor exit to the level of the town.  Along the way, we were able to get some very nice shots of the ship and harbor. 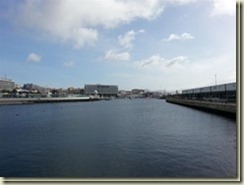 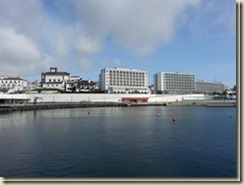 The Harbor Area from the Walkway 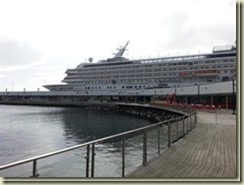 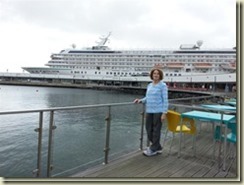 More Shots from the Walkway

We walked along the main street bordering the port, Avenida do Infante Dom Henrique.  The stores along here – interspersed with empty ones – consisted of souvenir shop and pharmacies.  The restaurants we passed all offered varied fare at reasonable prices. 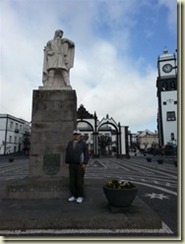 The Statue of Cabral 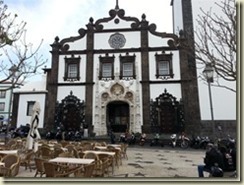 The town was the site of some kind of gathering of motorcycles – the roads were full of bikes (hundreds maybe) and they were all amassing at the Church.  So many bikes on so many narrow streets made for ear splitting noise.  Some of the bikes went out of their way to rev the engines for even more noise.  We had to take a route avoiding the bikes somewhat cutting down our options.

The weather started off pretty nice (actually a little warm for our windbreakers).  After about an hour and half of walking on cobblestones and streets made of volcanic bricks, the weather started to turn chilly.  It was time to return to the ship.

Lunch in the Lido consisted of a salad (of course), something called a Salmon Frittata, and a veggie burger from the Trident.

The roof of the Trident seating area was closed today keeping the area warm.  A perfect place to read.  However, Ellen wanted to go to the open deck couches (to get away from the smells from the Grille).  It was cold and we needed blankets.  I finally finished “Inferno” by Casey Hill.  It was an OK book – not as much forensics as I might have wanted but the ending made sense and we finally figured out what was ailing one of the characters.

Crystal Casual tonight – we were seated with just another couple (Jewish it turned out) (Ellen and Mel) from Savannah, Georgia.  Very nice couple and a very pleasant dinner.  We had ordered Kosher meals tonight – A whole chicken for Ellen and a steak for me.  One of the head waiters carved the chicken (amazing). 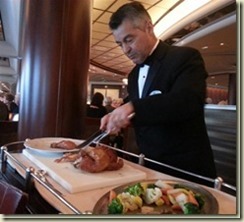 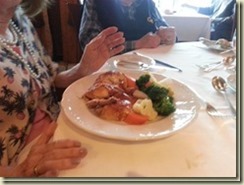 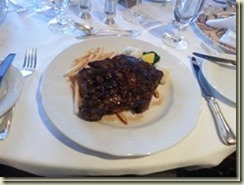 During dinner, I was able to get a picture of the cloudy and gloomy sail away through the dining room window. 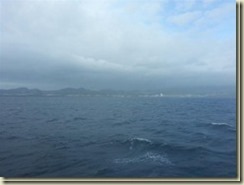 Tonight’s Show is a Variety Type.  First up was the Dance Duo of Ryno and Elena – they did about 10 minutes of a Paso Doble.  Lots of athleticism and quick moves.  Difficult to photograph in the red light used by the AV folks. 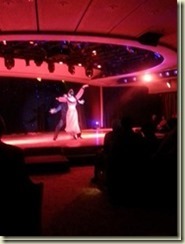 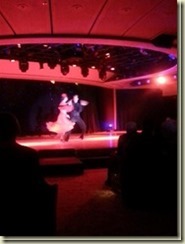 Rounding out the evening was a 45 minute set by Ventriloquist/Comedian, Mark Merchant.  He introduced some new characters besides Zelda Rose:  Jose Diego Jones (“Honas”), a Mexican Bald Eagle, Alonzo, a black character, and Wing Tip Shu, a Chinese character.  No problem with PC with Mark Merchant.  Also, some very funny bits on the current Presidential Race, some stuff on Bill Clinton, etc.  A very funny show. 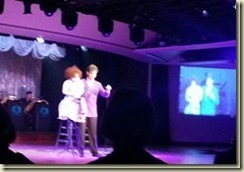 After a latte in the Bistro, we went to the Cove to listen to the Ruby Bamboo Trio.  Tonight, because the lead singer was under the weather, it was only a Duo.

We didn’t stay long since we are losing yet another hour tonight.

We were not able to keep the veranda door open because of the wind noise and the movement of some of the furniture.

The chop has returned…