Cool day at sea but not many clouds in this fantastic blue sky.  The ship is traveling along the southern coast of Spain heading for the Catalan Region and Barcelona.

The seas are a bit choppy still. 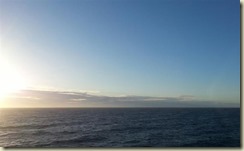 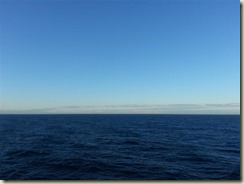 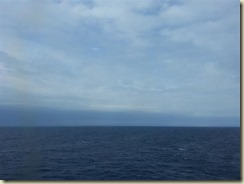 The Coast of Spain (bottom)

I have finished my speaking series but the other speakers have been recruited for a panel discussion called “Ocean Views”.  This activity, hosted by Shane, involved Michael Fopp (a last minute replacement for General Gadsby), Bulent Atalay, and Mark Ginsberg.

The panel submitted a series of questions/issues to Shane.  These questions were then presented to the audience, who gave their responses via a wireless transmitter (very high tech).  Then the panelists would state their position on each issue followed by a revote by the audience.  The premise was to determine whether the panelists could sway the audience’s views on the issue. 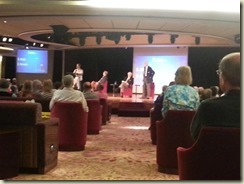 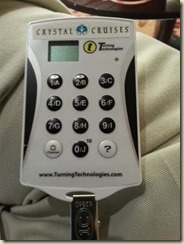 Fortunately, the topics were relatively non-controversial – however, there were some comments that had the potential to turn the session contentious.  They were politely neutralized by the panel.  It was an interesting experience and one I had never seen before on a cruise ship.  And I’m so glad, I wasn’t part of the panel.

The rest of the day was spent reading and relaxing and, of course, eating.