Another hour forward last night so another tough morning… 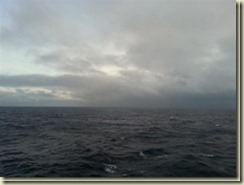 Standard breakfast in the Lido Café.  I have not been able to eat on the back deck since the cruise began – too windy and chilly for the most part.

We went to the lectures offered this morning in the Galaxy Lounge.  First up at 10 AM was Brian Gendece - “Everything Old is New Again” – He showed clips of similar dance sequences from the golden age and modern day.  Some very interesting dance numbers including the Michael Jackson’s Moon Walk, which was actually first seen in the 1940s (called the “Backslide”).

Marc Ginsberg followed at 11:00 AM with a Q and A about the Middle East.  The numbers of questions from the audience turned out to be minimal and most of the hour included background information on the Sunni and Shia sects and other geographical information on Middle East Countries.  He never got to the topic of Israel, which might be part of the next session.  All in all, not as much new information as I had hoped.

The ship was holding a “Gala Buffet” in the Crystal Plaza – complete with an ice sculpture, the introduction of the chefs, and a carving station. 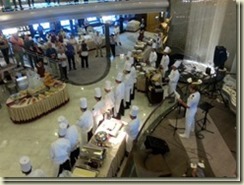 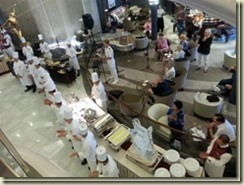 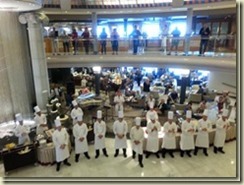 We were looking for something a little quieter so we had lunch in the Lido Café – along with my usual salad, I ordered a pizza from the Trident Grille – the pizzas are very good since they are right out of the oven.

We went to the Palm Court to read – 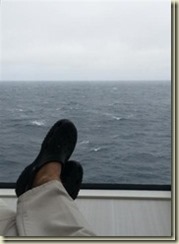 it was very quiet with the exception of some private dance lessons.  I finished “Inferno” and started my next Harry Bosch Novel (“The Black Box”).  I was worried I had read this book but no. We stayed in the Palm Court until High Tea was served and wound up chatting with Michael and Rosemary Fopp.

Although the weather outside looked ominous, we went down to Deck 7 to see if we could walk.  We were very surprised that it was actually pleasant on the open deck and the only wind was at the bow. 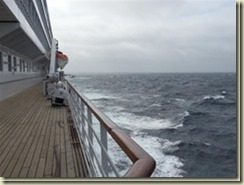 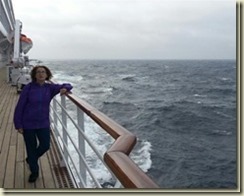 Putting on Steps on Deck 7

We did at least seven laps or about two miles.  It was very nice being able to walk again on the deck.

We went down to dinner early enough to try the drink of the day – the “Bellini”.  It was supposed to be a peach based drink but it tasted pretty much like a Mimosa. 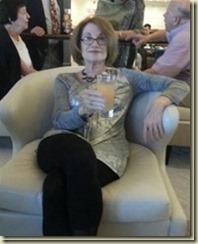 No kosher meals tonight in the Galaxy Dining Room.  We were placed at the table with Fern and Linda.  There were few options on the menu tonight so I had the veggie option (a mushroom quiche) and the generic pasta and tomato sauce – I passed on a salad but really like the cream of celery soup.  We both had the Devil’s Food Cake (pure chocolate actually).  We ordered a kosher steak for tomorrow (we are going to share).

I suggested an early evening and we were back in the room.