Another nice breakfast – for some reason, I am not tiring of the cereal (a European version of Special K), banana, and milk (maybe because the milk is cold).

The weather continues to be absolutely wonderful – it looks like the rain will hold off for our entire stay in Nice.

We’ve regained feeling in the bottom of our feet (from yesterday’s walk) so we are once again hitting the road.  Our plan today is to visit two religious sites – the St. Nicholas Cathedral and the La Grande Synagogue of Nice.  The two sites are located at opposite ends of the city so we will get plenty of steps in.

We started out heading North from the hotel – back toward the Train Station – to our first destination – the Russian Orthodox Cathedral.  It is located, appropriately, at the junction of the Boulevard du Tzarewitch (very interesting spelling) and Avenue Nicolas II. 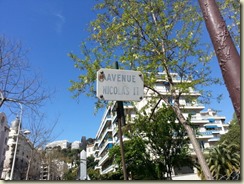 It is located in a nice neighborhood of condos and trees and set back from the street.  We walked around the structure to take in all of the architectural features of this very impressive building. 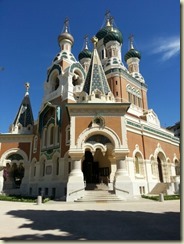 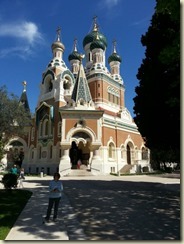 Front View – with and without Ellen 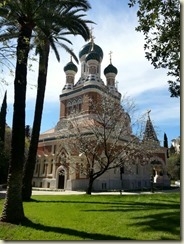 View of the Rear of the Cathedral and Grounds

The cathedral was opened in 1912, thanks to funds provided by Tsar Nicholas II, the last Tsar of Russia.  There is a plaque on the side of the Cathedral to commemorate Nicholas’ role. 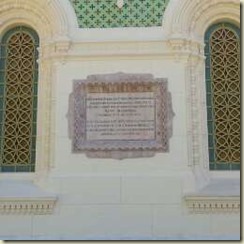 A little about the history of the Cathedral:  In the early 19th Century, Nice became a go to destination for upper class English society – a place to get away from the drab and dreary climate of Britain.  Some decades later, Russian nobility also discovered Nice including Tsar Alexander II.  The Tsar took advantage of the new railroad stop at Nice to visit in 1864.  Again, the Russian winters drove upscale Russians to the Mediterranean climate of Southern France.

In 1867, Tsar Alexander II demolished the villa and built a chapel, which is still there, in his son’s memory on the grounds. 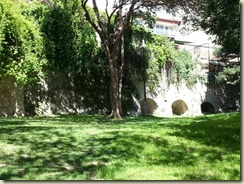 In front of the chapel, there is a statue of the Tsarevich. 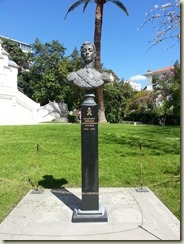 I was getting a little hungry so we bought a small baguette – “Pain Ficelle” - from a bakery on Tsarewitch Boulevard (75 Euro cents) – fresh and delicious.  From there, we headed South – past the train station and our hotel, to find the Synagogue of Nice.

The streets were a little confusing but we eventually found the building which was located near the intersection of Avenue Jean Medecin and Rue du Marichal Joffre. 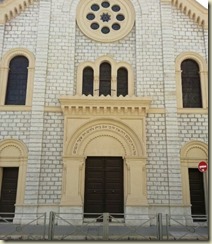 The building was squeezed between two other buildings and not very remarkable.  It looked closed and dark.  Quite a stark difference from the St. Nicholas Cathedral.

From the synagogue, we went back for our last look at the beach at Nice.  Another wonderful view – this time, I was able to catch an MD-80 taking off from the airport and banking away from the city. 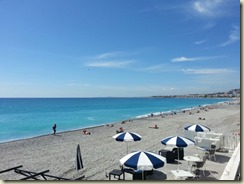 We were both hungry so we went to the pedestrian walkway to find another pizza restaurant.  We found a nice one, with OK service, and smoke free on the inside.  We decided to treat ourselves to a fancy pizza – one with salmon on it.  As it turned out, the combination of mozzarella cheese, tomato sauce, and salmon was not a winning one – the salmon overpowered all of the other flavors.  We ate the pizza but it was an acquired taste that we had not yet acquired.

From there, it was back to the hotel to rest up for our trip home tomorrow.  All in all, another 16,000 steps and a wonderful day in Nice.

We spoke to the hotel desk clerk and arranged transport to the airport for tomorrow morning.