Got up late this morning – after 8 AM – and didn’t get to the Lido until 8:30 AM – there were already lots of people in the Café.  I was thinking about an omelet but I told the cook I would probably get some scrambled eggs.  He insisted on making me some fresh scrambled eggs.  I had them along with a waffle and syrup.  I didn’t stay long at breakfast because I wanted to go to the morning lectures.  I ran into Andrew Gadsby, who told me to skip his talk and go back to bed but to make sure I caught Bulent Atalay.  I told him I was going to be at both.

After picking up my iced decaf skinny mocha latte (IDSML) at the Bistro, I got a nice seat in the back of the theater for Bulent’s talk - “The Greatest Englishman Ever”.  While I was sitting back there, Bulent came all the way from the stage to say hi and formally meet each other.  What a nice gesture.

I stayed for Andrew’s talk about “The Battle of Trafalgar” until Ellen came by to remind me that we had to go to Shorex for orientation.  We did that so we are all set for upcoming tours.

Lunch was again in the Lido Café – Salad, vegetarian Chili, and tuna salad from the Trident completed our light lunch.

My final talk - “Forensics and History:  Search for the Unknown Titanic Child” - was scheduled at 1:30 PM in the Starlite Lounge. 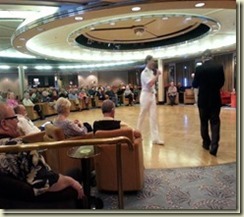 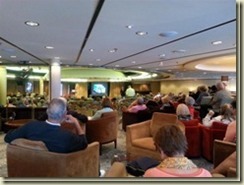 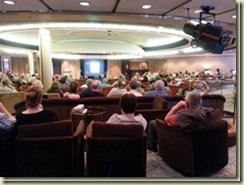 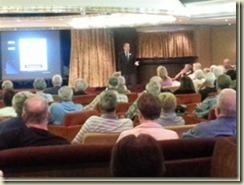 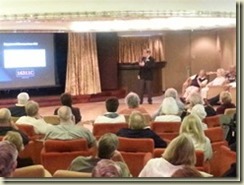 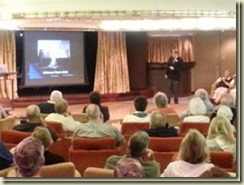 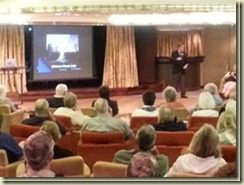 Ellen said it was a Full House – 300 people or so with some people standing in the back.  A few people had to leave to go to Bridge.  Otherwise, everyone else stayed.  I stayed and chatted with some guests after the talk. 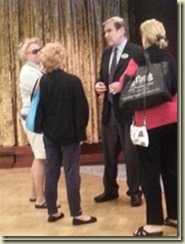 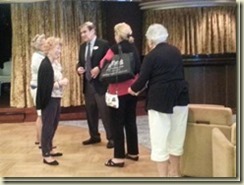 All in all, a very successful debut on Crystal.

We decided to stay in our lovely stateroom until dinner – reading, journaling, and resting.  The ocean outside our window was beautiful and relaxing – why not?

Crystal Casual – we were seated once again next to Mary and her husband (the folks from Iowa) – their other tablemates were off eating somewhere else so it was just the four of us.  We had ordered one steak to share but, of course, two steaks came and we did our best to not eat both of them.  Before that I had the carrot soup (off the Modern Menu) and the crunchy green salad with champagne sauce.  A soy latte finished things off.

We got to tonight’s show a little early to try and get good seats.  The ship is doing its version of “Dancing with the (Crystal) Stars”.  Four crewmembers are very briefly trained by one of the pro dancers on the ship and the compete and are judged by guest entertainers (Mark Merchant, Roger Wright, and Brian Gendece).  The show is hosted by Shane and Julie Bell.  It was amusing to watch and along with the contestants, the pro couples and Crystal Dancers also performed.  The theater was bouncing so badly that I had to get off the seat a couple of times. 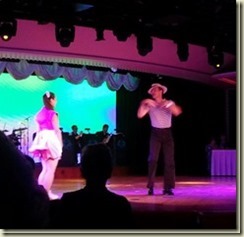 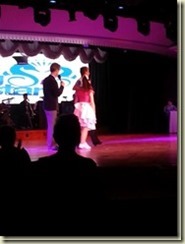 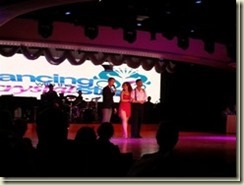 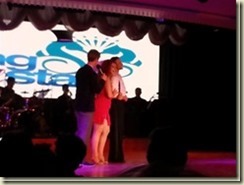 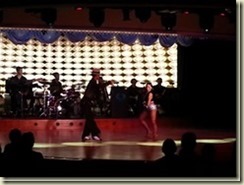 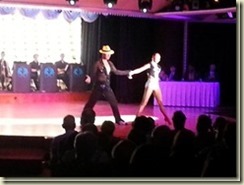 The more ballroom-y couple, Chris and Natalie, also did a demonstration dance. 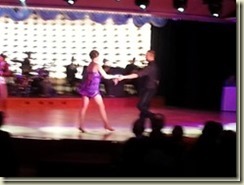 The finale brought all of the dancers on the stage 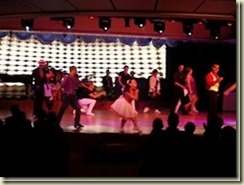 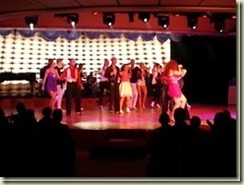 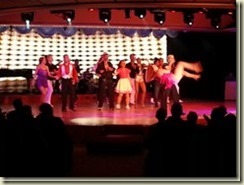 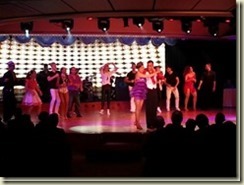 There is another time change tonight (forward, or course), so we went back to the stateroom.

A change in course must have altered the way the waves are hitting the ship because the shuddering appeared to have stopped.

We were now in the Straits of Gibraltar 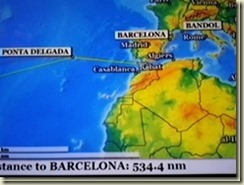 and we could see the shore of Morocco from the veranda.  It was quite impressive especially the huge hillside sign in Arabic. 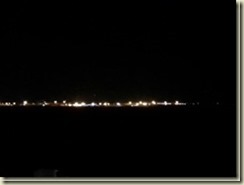 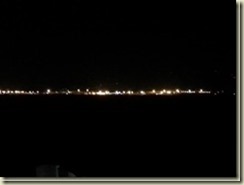 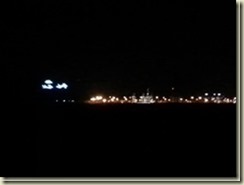 Coast of Morocco (Just past Casablanca and Rabat)

Hoping for a smooth night.