This day started off with big time rain and thunder and lightning.  The storm, due to come in late in the day, has decided to surprise everyone and get here early. 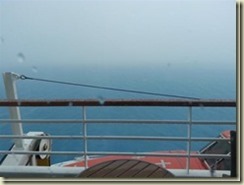 Raining on the Veranda

I had my usual breakfast (waffles, cottage cheese, preserves, and a smidge of scrambled eggs) up in the Lido Café – the place was crowded with passengers getting ready for their Day 2 Excursions.  I didn’t stay long.

We again took in the Late Risers Breakfast in the Trident Grille – Ellen had the very delicious Apricot French Toast.

I had lunch in the Lido Café – Today I decided on Salad (with Ranch Dressing – the salad bar is so good), Tempura Veggies, Stir Fried Veggies, Herring in Tomato Sauce (surprisingly good and the only option since the creamed stuff is no longer available), and a cheese blintz with blueberry sauce (dessert).

Feeling like I had overdone it with lunch, I decided to walk the open deck 7 – a mile is 3.7 times around the deck.  I finished up doing 7.5 plus laps(about 2 miles).  I might have burned off the tempura veggies with that walk.

Defying the weather forecast, the sun came out after lunch.  This negated the entire reason I was scheduled to speak at 4:00 PM – to give people something to do during the rain storm.  I went to the Starlite Lounge at 3:30 PM – about 10 or so guests were already in the front row seats.  A bonus for early attendees was a chance to see both dance couples practicing.

Shane came by to introduce me and was surprised by the turnout – he was sure that with the improved weather, the crowd would be small.  However, the venue for “DNA Testing: Cold Cases Solved” was 85 percent  full – 250 plus people- after another introduction from Shane.  The lecture went well including working with the Captain’s Sail Away announcement. 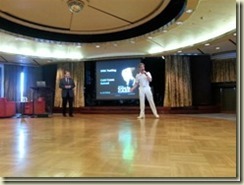 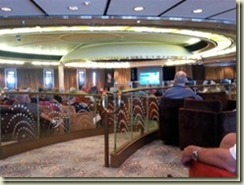 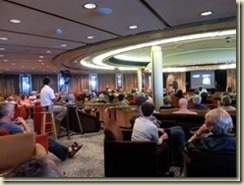 During his announcement, the Captain indicated that he was going to deviate from course to avoid swells and winds.  The ship would do a more easterly route and then head North for the Azores – should mean warmer weather longer. 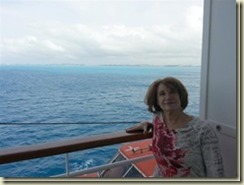 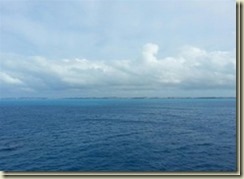 Bermuda Sail Away from Veranda 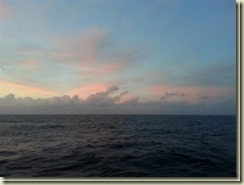 Heading to the Azores

After a Mojito from the Plaza Bar, we went to the Dining Room for dinner.  We are assigned a table we thought was occupied by the people we met the first night.  Instead it was only Vicky (one of my consistent attendees) and four new people.  I had the green salad, avocado soup, salmon and ravioli side dish.  Ellen had the Pan Fried Sole.  The dining room was full and pretty noisy so we had dessert and coffee up in the Bistro.

Neil Lockwood is the “In the Town” performer tonight and he is giving early shows.  We went to his 8:30 PM show during which he did his Elton John Cover.  It was a good show and included “Can You Feel the Love Tonight” and “Candle in the Wind”.

We listened to the Ruby Bamboo Trio for the first time in Crystal Cove – the lead singer has an accent that I can’t place – mellow and easy to listen to.  Unfortunately, we were the only two people in their audience. 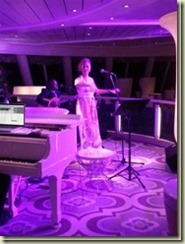 The ship is rolling a little and the room has a bit of a shake to it – I did find a way to silence the creak associated with the TV.