Well, I was wrong – it was pretty noisy all night.  Some of the noises were actually scary.  Next time, it will be the Hampton Inn somewhere near the port.

We had breakfast in the dark, windowless basement eating area.  Enough said.

Again, the desk personnel were very helpful and called for a transport to the Brooklyn Cruise Port.  We wound up in a very nice town car with a driver not a cabbie; it did take quite a while to get to the port in the rain and traffic.

Check in didn’t take long but we did wait just a little while before being allowed to board the ship.  Cunard had some interesting adverts up touting its crossings.  We wanted to be part of the ad campaign. 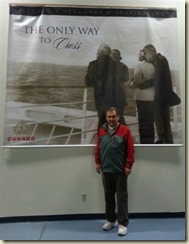 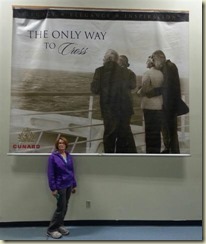 We boarded and checked out our room – ED31 (“Entertainment Deck” or maybe “Extra Deck”).  In any event, it is a very nice room.  There was a bonus in our room – the previous occupant had left pretty much all of his clothes in the room.  Our steward indicated that it would all be moved to that person’s new room and our stuff would be here soon. 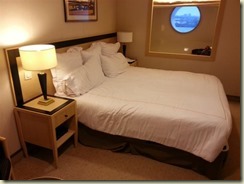 We had our embarkation lunch in the King’s Court Buffet.  The usual fare.  We did find a crew member to take a non-blurry picture of us. 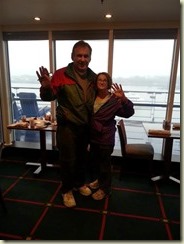 It is a very dreary day outside – intermittent rain and chilly temps.  I wandered out on the soggy deck to get a picture of the East River and parts of Manhattan. 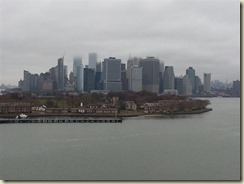 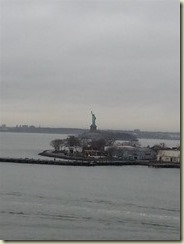 We walked to one of the aft decks to get this picture of the lifeboats. 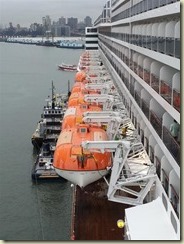 It will take a while for the deck chairs on the open deck to dry out – they are completely soaked.  When the weather gets warmer, this is where we will be spending pretty much all of our free time.  It will take a few days for that to happen, so we will need to find other public places to hang out in. 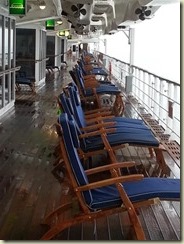 We attended the lifeboat drill – our muster station was the gym at the Canyon Ranch Spa.  As we were standing there listening to the announcements – at least most of the passengers were listening – I saw someone familiar.  Roger McGuinn, former Folk Rock star, and his wife, Camilla.  We were on this same cruise with them in December 2011.  Four years have gone by so quickly.  He did recognize us and told us that he would be doing a series of lectures – similar to those he gave on that earlier cruise.

We had dinner in the King’s Court Buffet – they have added some new and nice touches – pizza and pasta made to order at the Chef’s Galley.  You order your items, get some salads, and find a seat in the Galley area.  It’s a nice option even though it can be slow and noisy.

The sail away was a dreary event but the lights of Manhattan made it more interesting. 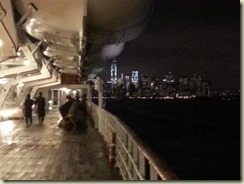 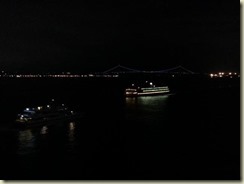 The Welcome Aboard Show was hosted by Entertainment Director, Paul O’Loughlin.  He was the ED in 2011 – we met up in the elevator and he recognized me and welcomed me back on board.  There was not video interview this time around (good thing – the last one was a jittery experience).

The Royal Cunard Singers and Dancers are, as usual, terrific – great voices and energetic dancers.  We are looking forward to some great shows and acts. 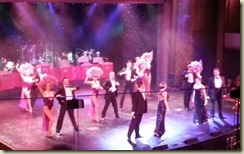 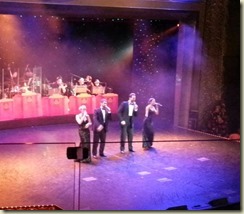 There is a piano entertainer in the Golden Lion Pub that we will be spending some time with (did not get his name).  He’s only on for a short time each evening just before trivia, which fills the place up.