Another quiet night – another beautiful day in Nice.

I’ve figured out how to make American style coffee using the fancy coffee machine – a major victory.  Breakfast is still dry cereal with milk and bananas (actually very good) and rolls and jam or butter.  Not fancy but good.

The plan today is to walk to the main shopping street of Nice – Avenue Jean Medecin.  The walk took us past the Notre Dame Basilica, near to where our original Mercure Hotel is located.  It’s a very busy street so I think we made the right call with the Ibis Styles Hotel. 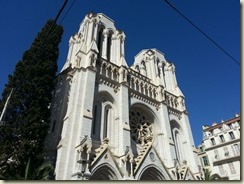 We proceed down the Avenue toward the Place Massena, passing hundreds of shops, coffee shops, and some very large department stores.  When we got to the Place, I checked out a Salad Bar Restaurant.  The clerk spoke English and explained how things were weighed per ingredient (they make the salads per your instructions).  I calculated, based on the weight and price, that my kind of salad would run past 9 Euros – a little much for lunch.

Place Massena also contains seven statues sitting on poles.  The installation is called “Conversation à Nice” and they represent the seven continents and the communication between the World’s communities. The statues are illuminated every night with changing colors. 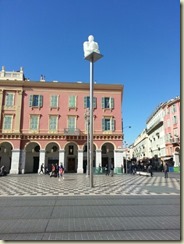 From the Place Massena, we proceeded to the beach area again (it never gets old especially on a cloudless, beautiful day). 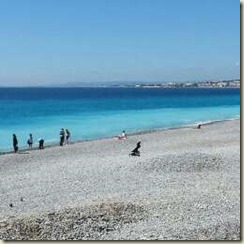 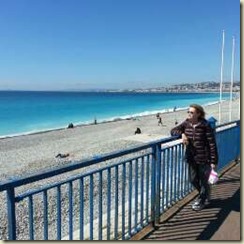 Checking Out the Beach

We walked to the end of the Promenade and almost decided to go as far as the Old Port of Nice.  Instead we stopped at the overlook.  There we found what looked to be a Solar Calendar of some type. 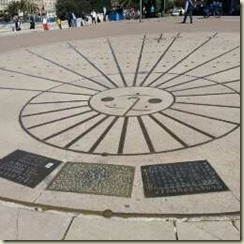 From this vantage point, I got a fantastic panorama shot of the entire Nice beachfront – stretching all the way to the airport.  By the way, the Nice Bay is called the Bay of Angels.

We went back toward the main city on the Promenade with a goal in mind – grabbing lunch to go at the Subway (our go to place around the world – all about the gloves).  We picked up a Tuna Sub (the fixins were not quite the same as they are in the states) and took it back to the hotel for lunch.  They did not take charge cards so we scrounged up all the Euros we could find to pay for the meal.  When we left the Subway, a huge line had formed – timing, again, is everything.

The sandwich was good – there were chips and a soda as well.  We ate out on the hotel patio – there were some smokers but separated by some distance.

After resting a while, we headed back out again.

Our destination again was the beach area but this time, I wanted to get a good look at Nice’s most iconic hotel, the Hotel Negresco.  The multi-star hotel was built in 1913 and is a popular sight on the Beachfront. 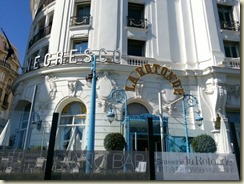 The hotel uses hedges as privacy barriers but I managed to sneak a picture of the hotel patio. 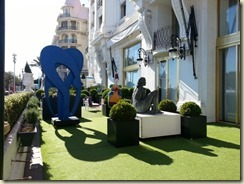 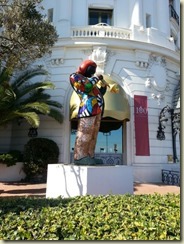 From the Hotel Negresco, we proceed along the main street to the Musee Massena.  We didn’t go in but we did walk through the lush gardens. 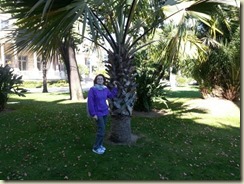 The “Centennial Monument”, a statue of Winged Victory – “Nike” – was inaugurated in 1896 and commemorates the 100 years of association of Nice with France.  The city’s name is thought to be a French version of Nike.  This was our next stop. 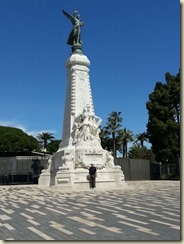 At this point, we decided to get an ice cream cone at the McDonalds on the beachfront.  The place was packed and it was hot inside.  The system here (at least at this facility) is different than in the States.  A person with a WiFi tablet walks through the lines of people taking their orders.  She then hands them a slip of paper with a number on it and you hand it to the server behind the counter to get your stuff.  Even though I kept saying “Cone” in as many versions as I could, we would up with some kind of ice cream sundae.  It was so tiny – maybe half the size of what we are used to.  The ice cream was OK but we had to eat it in the McDs.  This place was very atypical compared to the many McDonalds we have visited around the planet. 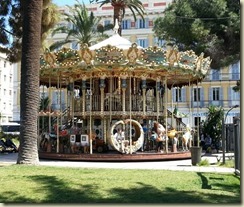 Carousel in Park Near Boardwalk

Dinner tonight was in a pizza restaurant near the hotel (in the Middle Eastern neighborhood).  We ate inside to avoid the smokers.  The service was non-existent but the food – a Salad Mixte (I know, I’m being brave) and Pizza Margherita was OK.  Tip was included (a good thing since I wasn’t going to tip the waiter anyhow).  The restaurant did have facilities – always a good thing in Europe.

After dinner, it was back to the hotel (no more walking – we had logged about 15,000 steps on our pedometers) to plan out tomorrow’s adventure.