We haven’t been in Bermuda since July 2010.  During our last trip here, the big news was the arrest of a suspect in the “Grim Sleeper” serial murders.

Slept much better last night – keeping the sensory input low and opening the veranda door a little seemed to be the major factors for success.

From the veranda, I got great pictures of the calm Atlantic (as we approached Bermuda) and a spectacular sunrise. 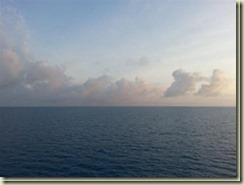 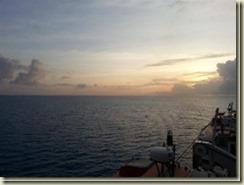 Sunrise from the Veranda

The Lido Café was pretty crowded today filled with passengers getting ready to go on their tours.  I did find a table and have my usual breakfast – before the cruise is over, I will find other things for breakfast.

The sail in to Bermuda and King’s Wharf was scenic. 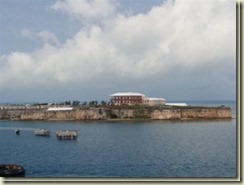 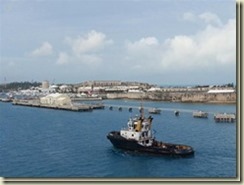 When I got back from breakfast, I got a call from Roman, the Assistant CD, who told me that he was scheduling me for a talk tomorrow at 4:00 PM.  He also told me, or so I thought as the time, that I would only be giving four lectures instead of the six originally set up.  Based on this information, I did some modifications to the talks to conform to the new arrangement – Cold Cases, Romanovs, and Titanic Child.  I was a little confused about the call so I went to see Roman – he was not in his office but, over the phone, we went back over the layout and he said the Librarian would be sending a revised schedule to the room.  All settled.

We wanted to try the “Late Riser’s Breakfast” in the Trident Grille.  We got there just before it closed at 11:00 AM – Ellen got the Apple Pancakes and I tried the Spanish Omelet.  The Pancakes were better than the omelet, which was good but not what I thought it was going to be.

Our plan this afternoon is to walk around King’s Wharf Naval Docking Station.  We made the full circuit of the dock area and checked out the two “Shopping Malls”.  The shops are mostly crafts and art and expensive souvenir stores.  There is also a beach – deserted today – and a few restaurants and bars.  Passengers are either going to Hamilton (via ferry) or staying on board.  After about an hour, we headed back to the ship.  Our pictures from our visit to Bermuda are below: 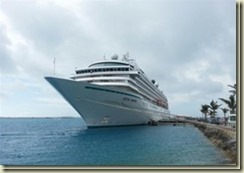 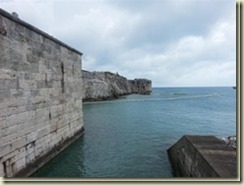 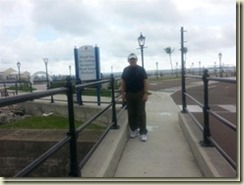 At the Dock Area 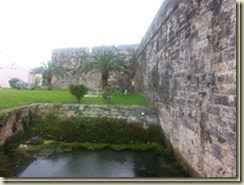 The Fort has a Moat 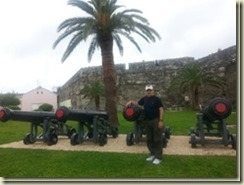 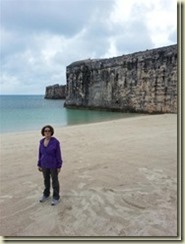 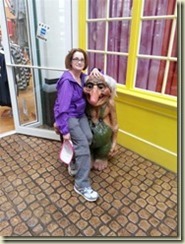 With a Troll in the Shopping Mall

We found some guys that agreed to take out picture.  It turned out to be pretty good as it included both an anchor and the ship. 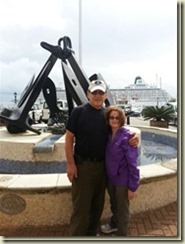 We are at King’s Wharf

When we got back to the ship, an envelope containing the revised lecture schedule was in our room.  It was clear there was something not quite right so I made arrangements to meet with Roman at 4 PM.

The rest of the afternoon was spent in the shade on couches on the pool deck.  Even though it was warm, an occasional breeze kept the temperature under control.  I tried a Margarita and Ellen sampled a Banana Daiquiri.  I am still reading “Inferno” by Casey Hill – it is taking a long time to get rolling even though the body count is up to three.

A good time for a beer 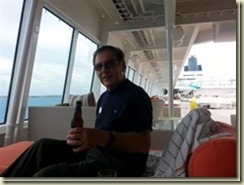 I also went up on the Sun Deck to take some pictures of King’s Wharf. 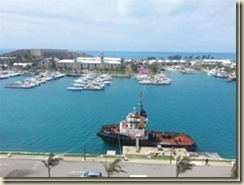 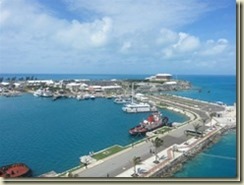 The View from Deck 10

Just before 5:00 PM, I met with Roman in the very nice CD Office (had a chance to say hi to Shane).  We worked out the remaining schedule.  Bottom Line:  There are a total of five talks (the second one is tomorrow at 4:00 PM).  The order is slightly switched with “Jack the Ripper” preceding “The Titanic Child”.  I understand that scheduling on a ship is a fluid process; I think we are all set.

Tonight is a special night (maybe because we are here over night) – the Lido Café is open for dinner and the dress there is hyper casual – no jacket required.  We queued up at 6:25 PM and the doors opened right on the nose at 6:30 PM.  We didn’t stay (a long story involving badges).  Instead we went to the room, where I changed my shoes and put on my jacket, before heading to the Galaxy Dining Room.  There was something very interesting on the menu this evening,

Kosher Chicken on the Menu

The Maître D told us earlier that, although the chicken is Kosher, it is cooked along with the non-K stuff.  He did indicate that they did have a large selection of kosher items for dinner and all we had to do was order in advance.  We are probably going to give that a try before the end of the cruise.

We were seated at a table for eight but only occupied tonight by a single couple from Alabama.  They had come to my first talk so we had something to chat about.  They were at their main course when we arrived so we were a little out of synch.  I had the Goat Cheese Tart appetizer, cold Avocado Soup, Cesar Salad, Grilled Salmon, and Cappelini Pasta with Garlic and Cheese.  Everything was delicious.  Although the other couple had gone, we did not stay for dessert.  Instead, we went to the Bistro, where we ran into Ted and Kim (from the Bay Area), whom we knew from Mark’s sessions.  They also had gone to the first talk – we would up talking to them for a while.  I then spent some time talking to the Film Instructor on board – he was the guy that put “America’s Funniest Home Videos” on ABC.  He was proud of the longevity of the show.  His Italian wife, I think, was more interested in talking about the CSI Effect.

We went to Mark Farris’ late show (another nice plug from Mark) and from there to the Crystal Cove (for some P and Q).  This ship has a very high tech positioning monitor (below).  This view is not that exciting since we are docked but it is still cool. 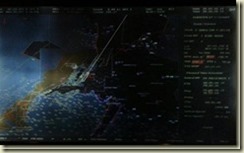 I would have to say that it was a very unusual day overall.