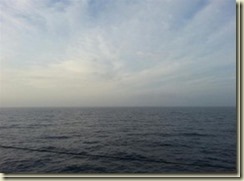 A beautiful day at sea… Another so-so night of sleep – had a little trouble working out the temperature of the cabin.

Had my first breakfast on the Symphony at the Lido Café.  Like on some recent cruises, the breakfast buffet opened late (for me) at 7:30 AM.  It was a very nice spread but I stuck with my standard WCP (Waffle, Cottage Cheese, and Preserves) breakfast.  I tried a little of the scrambled eggs as well.  The coffee was good and the servers kept it coming.  The service overall in the café was terrific and the food was very good.  I put together some “room service” breakfast for Ellen and my server brought me hot tea in a to-go cup – very nice.

After breakfast, I attended a lecture - “The Battle of New Orleans” - by Andrew Gadsby, an English Brigadier General.  It was pretty battle detailed.  I wanted to see how he handled the 45 minute limit. He wound up going over an hour (despite being waved down by Shane).  He ran into the next lecture, which had to be delayed 10 minutes.  I am going to have to be careful with my run times.

Today’s schedule is a bit squirrely because of the noon meeting of Entertainment Personnel.  We went to the meeting in the Galaxy Lounge; Shane spent most of the time introducing all of the people providing entertainment on this cruise (singers, dancers, band members, art instructors, bridge instructors, speakers, lounge entertainers, etc.).  It was nice getting to see the people out of their performing element.  It made everyone feel welcome and valued.  The meeting ended up with an introduction of the heavyweight Crystal Cruisers (the ones with hundreds of voyages on their belts).

I had to rush from the meeting to another meeting I had with the production crew to check out my equipment.  I met with an AV tech at 12:45 PM in the Starlite Lounge to set up for my first lecture - “The CSI Phenomenon” – scheduled at 1:30 PM.   All the events for the day are not only available in paper form in the daily program, “Reflections”, but also on video screens around the ship (below).

The ship preferred to use their own computers so they can send the feed to the video system.  Lectures are also broadcast live and then repeated throughout the day.  My jump drive worked fine and all was set to go. 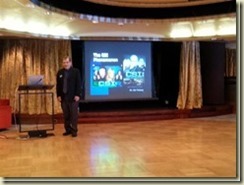 The lounge was essentially full when I got started – based on the average seating capacity of 300, I estimated the venue was more than 95 percent full – approximately 280 plus attendees.  Shane came by for a short introduction. 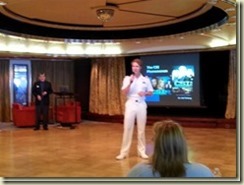 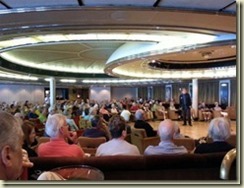 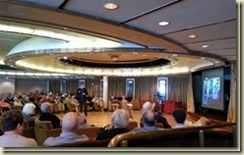 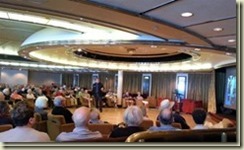 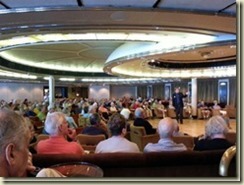 The talk went very well, the audience was responsive and attentive, and it ended on time.  A lot of nice feedback followed by several of the passengers.

After the talk, Ellen and I went to the Lido Café, where she had planned to take a class on painting with acrylics.

I was so hungry that I ordered a pizza at the Trident Grille – it was a very thin pizza and good – have to figure out a better way to deal with the meals.

I tried to read on my Kindle (I started a new Reilly Steel novel by Casey Hill- “Inferno”- the second in the series) but just couldn’t concentrate. 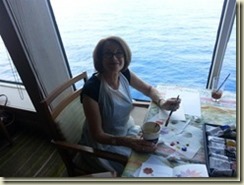 Ellen at her Painting Class

After that, we spent the rest of the afternoon on the pool deck on their very comfortable lounges (pretty sure there was napping involved).

Figuring out what to do for dinner was the real challenge.  Tonight was Formal Night and the only dining options were the Crystal Dining Room and Specialty Restaurants.  Going to the Second Seating was not an option as we would miss the first Production Show at 8:45 PM.

Ellen suggested we try to squeeze into the Dining Room (even though the Maître D said it was not doable until the second day).  We got into formal gear (I packed my tux) and I asked the Maître D about any openings.  After reminding me of what he had said earlier, he said “wait a minute” and scurried back to the dining area.  He came back with a table number and we wound up being seated with five women, three of which attended my lecture earlier.  We had a very enjoyable dinner.  I had the mushroom soup, a salad, Spaghetti Oglio, and cheesecake for dessert.

We went straight from the Dining Room to the Galaxy Lounge for the show - “Curtain Call”.  We sat in the first two seats in the far end of the first row.  A good place to sit if you don’t mind seeing the performers backs once in a while.  The show was all about Broadway Musicals – musical numbers are mixed with historical narration.  The orchestra provided the music for the songs.  The musicals featured were “Chicago”, “Evita”, “Cats”, “Miss Saigon”, “Man of La Mancha”, “Thoroughly Modern Millie”, and “Mama Mia”. 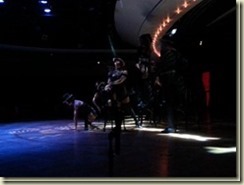 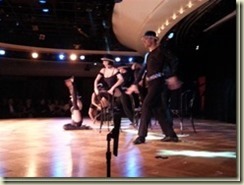 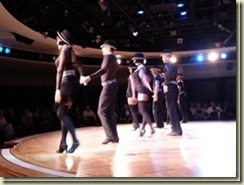 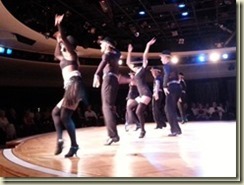 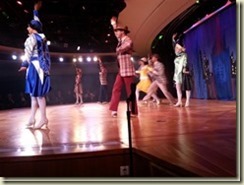 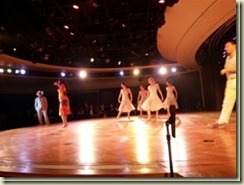 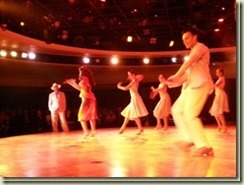 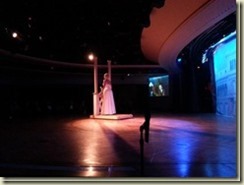 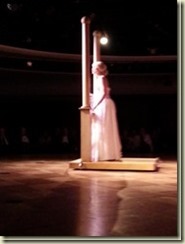 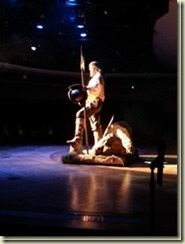 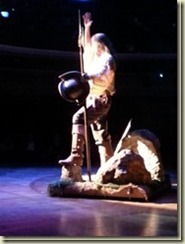 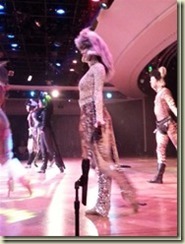 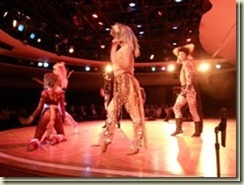 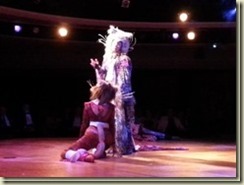 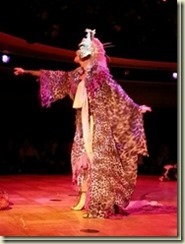 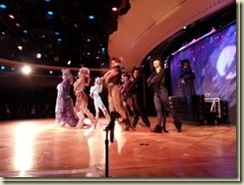 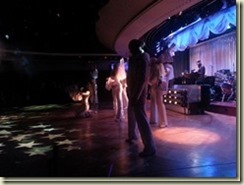 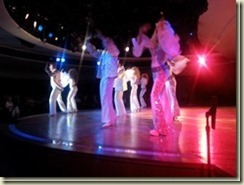 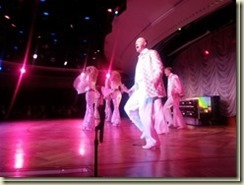 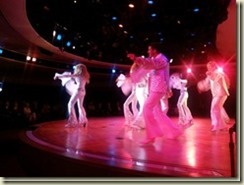 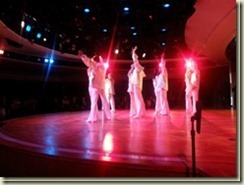 After the show, which went a full hour, we went to see Mark Farris in the Avenue Saloon.  Mark put together another terrific show, which is all adlibbed involving banter with the audience.  We stayed until 11:00 PM (when he had to give way to Karaoke).

Stayed up until midnight…seas are smooth.