This is an interesting cruise – QE is first going to the Eastern Caribbean, then through the Panama Canal, on to Mexico, and then up the California Coast, stopping in Los Angeles, and then ending up in San Francisco.  The itinerary has six ports and 11 sea days and is the second longest single cruise we have ever taken. We have not been on a Cunard Cruise in quite some time (QM2 - December 2017).

We have another early flight this morning – AA1424 depart ORD at 8:47 AM – so we called for a cab at 6:30 AM.  Originally, we were going to leave at 6:45 AM, but I noticed a glitch in my boarding pass when I checked in online.  I had no TSA PreCheck on my boarding pass.  After phone calls to both American Airlines and TSA (yes, I actually spoke to a very nice woman at TSA), it turned out that the Travel Agency (Carnival UK) that set up my flights entered a new middle name in my ticket – “Mr.”.  Because of that discrepancy in my name, TSA would not issue a pre-check designation.  I checked my return flight and everything seems to be in order so I am hoping that that doesn’t happen in San Francisco.  Hence the extra time spent in the airport.

We got to the airport in just about 25 minutes and checked bags at the AA Kiosk.  I headed for the regular security (Ellen kindly accompanied me even though she could have gone through Pre-Check).  Although, there were hundreds of people in line, the line kept moving and it only took about 10-15 minutes to get to the TSA officer.  That was instantaneous but the process at the scanners was a pain.  Shoes came off and computers had to be put in separate buckets.  All those items went in different directions and I was just hoping that they would all reappear.  They did, but why people would go through this and not get the TSA PreCheck is a mystery.  Masks were non-existent in Terminal 3 – we wore ours to be safe because the people density was high.

After that exciting experience, we headed to our gate, K19.  (Why can’t it ever be K2?).  Our plane was there waiting for us.

We boarded pretty much on time and sat for a few minutes in a hot plane when we were told there was a mechanical issue with the plane and we would have to go to Gate L2A where an identical 737-800 was waiting (3000 steps BTW).

There indeed was another plane at L2A

but it was not quite ready to go – one of the sinks was inoperable so that stuck on another delay.  We finally re-boarded – for some reason, even though it was the same passengers on this plane, I noticed a lot more masks.  My seat mate didn’t wear a mask when we boarded the first plane and now he was wearing one.  The plane loaded up, the doors closed, and I did not have anyone in the middle seat.  How about that – it didn’t make up for the TSA glitch but it was a start.

We finally took off – after more than a 90 minute delay.  Smooth flight all the way until we ran into moderate chop on descent into FLL – not real bad.  I always expect chop on landing so I was not surprised.  My seat mate wore his mask the entire time.

Our baggage claim was number 5 and it took a little while for the bags to appear on the carousel.  Our bags came off quickly and I called for a pickup from the hotel.  We were supposed to go left after leaving the baggage claim area and go to the E-F location, where hotel pickups, taxis, and other shuttles stop.  The desk clerk at the hotel said he would be there is twenty minutes and he was.  The shuttle made another circuit looking for other customers and then headed for the La Quinta by Wyndham –Ft. Lauderdale Airport (off of Sheridan on 26th Street).  The $213 per night that we paid for this hotel was about $100 more than we paid for this hotel the last time we stayed here.  It’s a nice hotel – not new but looks new – located on a large lagoon.  It has a nice pool area.  It used to have a wonderful breakfast but with COVID, that has been cut back.  This was the best price I could find for a hotel in the area – others were in the mid to high $300 per night.  This is not a special week end there should be no reason to jack up the prices like this – this is not helping with inflation.

We got to the hotel in about 20 minutes and checked in – our first room was 113 but we decided to switch rooms when we could hear the entire conversation going on in 115.  At first, I thought the desk clerk said the hotel was empty but later on when we switched to 307, she said they were all booked up.  307 was a nice room (with no adjoining room) – again, the hotel has aged well.

But before the hassle with the room, we had a major kerfuffle with the pizza we ordered for dinner.  The first place I ordered from said he delivered to the La Quinta so we ordered a small Margherita Pizza, a Greek Salad, and a Diet Coke.  Forty-five minutes later, I got a call from the delivery guy who said no one was in our room – I told him we were in the lobby.  He said there was no one there either.  He had gone to a different La Quinta.  When I ordered the food, I asked the owner of the pizza place whether he delivered and he did not ask me my address – in fact, the shuttle driver said there was only one La Quinta in the area.  I apologized to the delivery guy and asked him if he would bring it to us – he had a 10 miles range and we were at 13 miles (really).  He said he would have to trash the food (I hope the staff ate it) and I asked him to cancel the credit card charge – he said he would.

We ordered pretty much the same thing from a menu from the desk – this pizza – from “Pronto Pizza” arrived in about 30 minutes and we ate it in the lobby – it wasn’t the best Margherita Pizza and green salad but it was OK.

After dinner, we spent the rest of the evening out by the pool, which was comfortable and warm.  There was good separation out there and fresh air. 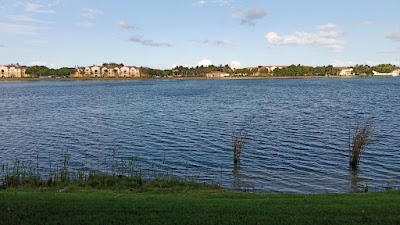 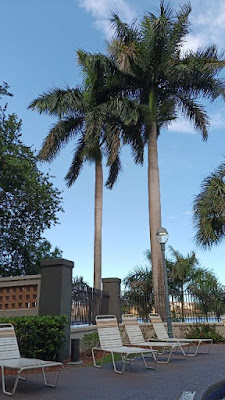 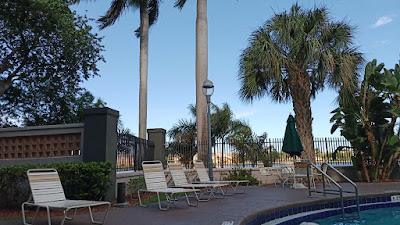 We stayed out there until about 9 PM – no bugs but lots of lizards, big and small - and then went to the room which was generally quiet.  The appliances, though tiny, are new.  The microwave has two USB ports and an extra outlet in the front – so you can heat up your pizza while you are charging your devices.

Light were out early tonight because it has been a long day – I was up this morning at 4:11 AM.  Hope the room is quiet.