Slept quite a bit better last night – the only possible difference is that I did not have any coffee after dinner – hidden caffeine, maybe.  Who knows?

My first presentation – “The Mystery of the Romanovs” is scheduled at 11:00 AM in the Royal Court Theater following the talk by Bob Donaldson, the third speaker, on the situation on the planet in 2040.  Very depressing talk – all about war and terrorists.  Not really what I want to hear when I am trying to get away from that very thing in today’s world.  He did, however, have a good turnout.  His presentation was very light on graphics and heavy on words and paragraphs.

After he finished, I set up quickly amidst the mass exodus.  During the setup both the AV Tech and I wore our masks. 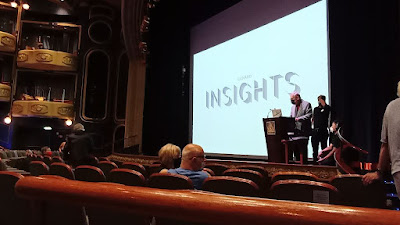 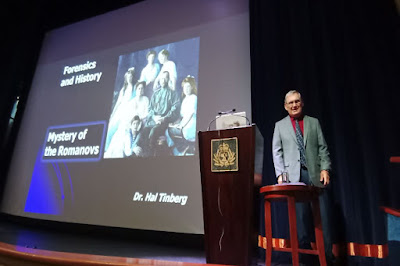 John was there to introduce me and we chatted a bit about mitigation on board QE.  I told him the ship was doing a great job.  He would, of course, want all of this COVID stuff to end and get cruising back to where it used to be.

The crowd did return and I did have a good turnout with people all over the place (every other seat is a social distancing seat with a “no sit here” sign – so from my perspective on the stage, the place looks full.  There were even people sitting in the royal boxes and in the balcony.  It looks like no one is there but the first row is unavailable and no one really wants to get real close to the stage (OK by me). 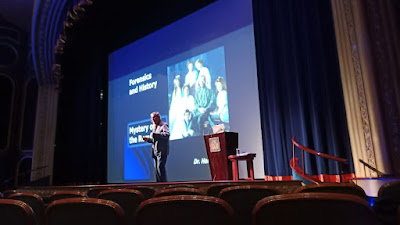 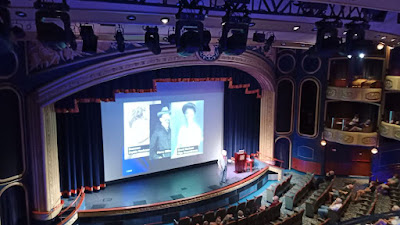 My voice was a bit raspy and I was a bit tentative in the talk – but I did finish right at 45 minutes and the few people who came to talk to me were positive with their comments.  It wasn’t the greatest opening presentation but it was behind me.  The clock in the last row of the balcony is great for keeping the speakers on pace.

We went to lunch in the Lido Restaurant and I had some salad mostly – the Ranch Dressing is different as I expected it to be and the “Marie Rose” dressing, I was told contains fish (all of the ingredients are listed next to the items) but when I checked, it didn't.  COVID restrictions do not allow anyone to get their own food - you are given either a "hot" or "cold" plate and the staff walks with you through the salad and hot entries and puts them on your plate.  That is the strictest food restriction so far on ships that we have seen.

The afternoon was spent on open Deck 3 port side – the chairs are comfortable with thick cushions and it is relative quiet and socially distant.  I am trying to finish my Spenser Novel,
“Painted Ladies” written by Ace Atkins, who took over for the late great Robert B. Parker.  Ace almost captures the banter from Spenser, which is why I read these books.

When it became too warm on deck, we also spent a little time away from everyone in the Garden Room. 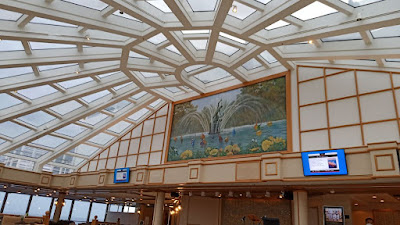 We had dinner in the Lido Restaurant tonight – I had the chef make me a very exotic pizza with rosa sauce (tomato sauce), pizzerella (mozzarella, I guess) cheese, garlic, red onions, Roma tomatoes, and sun dried tomatoes.  The pizza crust looked like a pflam pletzel but overall the flavors were interesting and I ate three pieces.  Will have to try this again with a less complicated concoction.  In addition, the Lido Restaurant has ocean views and is peaceful and quiet.

Before the show, we went to the Queens Room to hear the Everglow Duo perform their set.  They are entertaining enough and not too loud. 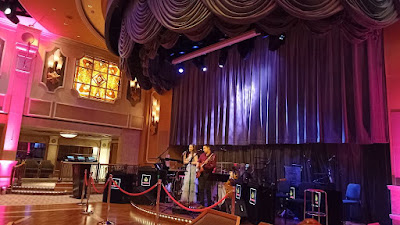 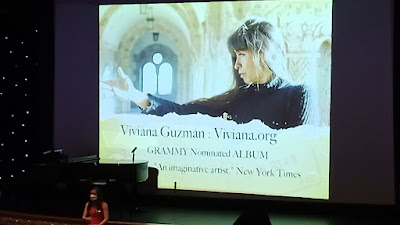 She was born in Chile, suffered through many years with a congenital hip issue, which just recently got finally resolved with double hip replacements.  She is a great story teller and showed us a number of different types of flutes from around the world.  She also included some very nice videos to back up her music.  She now lives in Half Moon Bay, CA and showed a drone shot video of her bicycling up a bill in her area.  A very enjoyable show.  A "mask monitor" was on duty before the show started.

We went to the room after her show.

Tomorrow, we are in Grand Turk Island.