We (those passengers that embarked in FLL) are scheduled for COVID Testing this morning at 8:00 AM so I went up early for the continental breakfast – essentially a croissant and coffee.

I did get a nice seat in the back with a view. 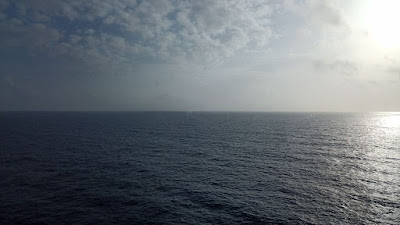 The regular buffet opened a few minutes early at 7:25 AM.  I was hoping for two eggs over medium, but the egg guy was not at this station, so I had my waffle (it came out of a drawer and the edges were neatly trimmed by the waffle chef.  More scrambled eggs (consistently creamy and delicious) accompanied the perfectly square waffle.  The cottage cheese on this ship is mostly whey – there are few curds to go on the waffle.  Passengers are still not allowed to get their own food - the staff relay process seems to be working.  Once you finished at one station, another crew member picks you up and takes you through the next part of the buffet.  I never get any food on the British Breakfast side of the buffet so I generally zip right through.  I am still sitting in the far corner of the restaurant away from other guests.  There are crew members running around with hot coffee so that's a bonus.

I got down to the room before 8 AM and we both went to ConneXions 2 and 3 (Deck 3) for our tests.  Another company - not Eurofins - is in charge of the testing on Queen Elizabeth. The ship is really organized for this – pre-barcoded cards were sent to the rooms last night.  We took those cards and our Voyage Cards to the testing site.  We were one of the first people there – no crowd, no line, and no wait.  There were maybe 5-6 technicians ready to sample guests. Two minutes later, we were done.  The testing is well timed - the incubation time has passed and there was one port of call - so the idea is to catch any new cases early.  It should be noted that on this ship, COVID Antigen Tests are known as "Lateral Flow Tests", a term not used in the US.  Makes sense because that is how these tests work.

I went to hear Jay talk about unusual marine critters at 10 AM in the Theater.  All three speakers are on today – in a row.  I am running the middle lap.  Jay talked about camouflage and color changes and poisonous creatures.  He ran out of time in the middle of a slide and indicated he would pick up where he left off next time.

I got set up quickly for “Forensics and History: The Search for the Unknown Titanic Child”.  I miss the chat with the audience but we are not allowed to go into the audience for COVID reasons. Most of Jay’s crowd left and were replaced by my audience about five minutes before I got started. 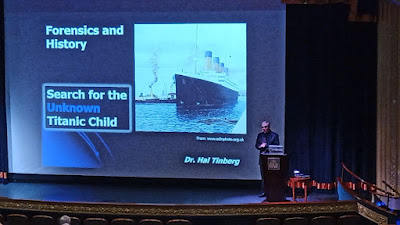 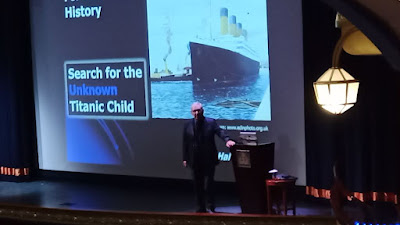 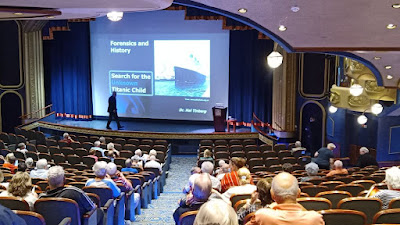 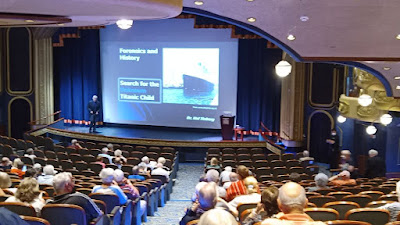 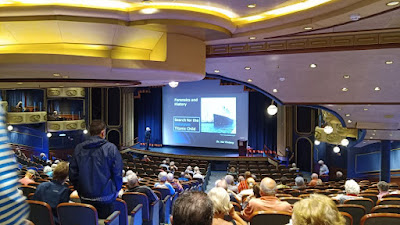 I had a bigger turnout than the first talk but it is impossible to estimate the attendance.  What I do know if that there were folks in the royal boxes and in the balcony.  I was happy with the attendance – my talk finished a minute late – I missed the clock in the back balcony the first time (someone was standing in front of it) but this time the clock kept me right on pace.  That’s the way to do it to keep things moving.  The applause was loud and long and the feedback was positive.  I met with a few people outside the theater and by the time I got back to the room, I was pretty tired.

We found good seats (away from any compressors) on Deck 3 and I read and snoozed for the rest of the afternoon.  We never got any update on the COVID testing but I’m sure any positives were notified.  We had no internet on this voyage so we couldn't be notified of our results via email like on previous cruises.  No news is good news.

Dinner was a bit nutty – the descriptions of the food do not always match the item.  I thought I had ordered two different salads but they were essentially the same (or my waiter misunderstood and I did get the same salad twice – I did request 1000 Island Dressing which he did get for me on both salads).  The corn chowder was good.  I asked the waiter to make sure that the tuna was well done.  It was but it was not as good as I thought it would be.  I did have a cheese and vegetable “dip” in a bread bowl which was the best thing tonight.  All of those items made us late and we had to rush through dessert and coffee.  Ellen ordered Rice Pudding but got a panna cotta instead.  We did not finish our tea and coffee.

Ellen wanted to get a good seat to see both Viviana and Jenene tonight for their Variety Showtime Performance – we wound up four rows from the stage.  There was no one in front of Ellen (so she could see) so that was good.  Mask Monitors continue to enforce the mask mandate and ensure that people are wearing their masks correctly.  I spoke with this evening's monitor and told her she was doing a great job (more aggressive than previous monitors).

Viviana started off with a “Fiddler on the Roof” medley and then "demod" other flutes from around the world including the “nose flute” (yike).  She is so enthusiastic about her music and her show was entertaining.

Jenene started off with “I Could Have Danced All Night”, followed by “My Heart Will Go On”, “If I loved You” and “Time to Say Goodbye”.  She was terrific again.  The theme from "Titanic" would have made Celine Dion jealous.  She continues to hold the title of best female vocalist we have seen on a cruise ship (very close runners up include Lindsay Hamilton and Karen Grainger).

After the show, to reduce interactions with other guests and because I was pretty tired, we went to the room to rest and settle down.