It was a very long night for both of us – I could not settle down – maybe the coffee was the culprit.  Through the night, I noticed that the ship had still not moved - that probably also contributed to a long and essentially sleepless night.

I finally got up for good at 7:00 AM and looked out and the ship was pushing away from the pier.  Captain Stephen Howarth came on the PA and said that the problem was a leaking engine water line.  Apparently, it took all night to get that fixed.  He also said that our arrival time at the Turks and Cacos Islands would not be affected.

I went up to the Lido Restaurant for breakfast at 7:30 AM (when it opened).  I had scrambled eggs and a freshly made waffle.  The eggs had something else in them – maybe milk and cream – but were still very good.  The waffle was underdone – I will keep an eye on that next time.  I did find cottage cheese and good preserves (in those little bottles).  The best thing – the coffee was hot and good.  The view at breakfast was a cloudy and stormy one. 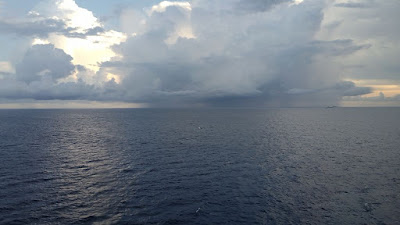 Ellen ordered Room Service and was not that happy with her scrambled eggs.  She did like her bread basket.

I went to the Café Carinthia to try their coffee and to check out my discount.  I ordered a large iced mocha latte.  It was really good and only cost me $2.93 – what a deal.  Ellen joined me at the Café but then went back to the room. I’m still trying to trim a few minutes off my talk.

I went to the Theater to see Jay Christofferson talk about Coral Reefs – he’s a marine biologist from California.  He had a good crowd.

Ellen and I went to the Golden Lion for the Pub Lunch – I had the Fish and Chips (the fish was good but there was something odd about the chips – also the malt vinegar was a golden color with precipitate in it). I am pretty sure that that is not how malt vinegar should look so I stuck mainly with the tartar sauce.  I had a pint of ale with coffee and almonds flavors – very dark with so much gas it was hard to swallow.

A pint seems like a lot to drink - yet the Brits can put away several pints (at least on TV).

The rest of the day was spent on the Promenade Deck port side (Deck 4), where I was able to get the obligatory iconic picture of Ellen against the railing.

I also went to the Entertainment Offices and met Sally Sagoe (the Entertainment Manager) and John Consiglio (the assistant EM) (to make sure my talks were in the correct order).  I’ve sailed with Sally before on the Queen Victoria (years ago).  John seemed like a very nice guy and easy to work with.  In fact, everyone in the room - all part of the Entertainment Department - were very cordial and helpful.

Tonight is the first of the Formal Nights - the Red and Gold Theme Night.  I wore my red dress shirt along with my dark gray pants and black coat.  Ellen, of course, was totally together with her outfit. 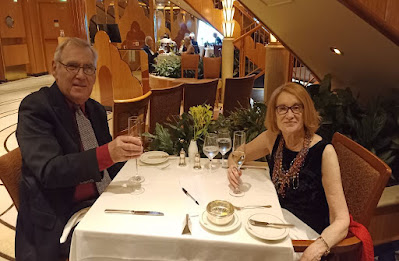 We were back at our wonderful table (300) in the Britannia Dining Room.  We both had the mushroom soup (delicious) – Ellen had the Sole and I had the Spanakopita (fila turnovers stuffed with spinach and cheese) (very good).  We just had the chocolate petite fours for dessert along with tea and coffee.  A pretty good meal.

The show tonight was the first of several Production Shows – “Be Our Guest” involved a lot of dancing and an unclear story line (pretty typical) but there was a very loud Adele medley sung by the two female singers and a very loud tribute from everyone to the “Greatest Showman”.  It was entertaining but it was starting to get up there in volume.

We spent a little time in the Queen’s Room before going back to our still quiet cabin.