Was sleeping OK until around 4:30 AM – eventually I did get back to sleep and got up for good around 6:30 AM.  Just before 7 AM, I got a call from Room Service that they did not have either pancakes or waffles.  I changed my order to scrambled eggs and a toasted bagel along with some oatmeal.  When the breakfast came just a few minutes later, he said that he would bring me a pancake when the Britannia Dining Room opened.  I called when he left and cancelled the pancake.  Maybe tomorrow. 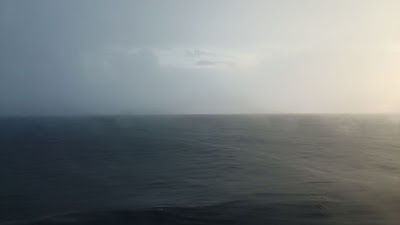 I did not care for their version of scrambled eggs and there was no salt, even though I requested some.  Still, the oatmeal was good and the coffee OK.  I was told that starting tomorrow, I will be able to order off menus from the dining rooms, so we’ll see how that works out.

I spoke to Ellen this morning and she is about the same – she does not get tested until Day 5.  I think most of her symptoms are related to a sinus issue so the antibiotics should help while she clears the virus.

At 8:00 AM, I went to ConneXions 1 to get tested and there was no one there. I guess since the whole ship is being testing today, I will get my test done along with them.  The lines were short and the sampling quick.  The tech told me to lower my mask so she could get a sample and I joked that that was the way a lot of passengers were wearing theirs – she understood and gave me a chuckle, which sort of made my morning.  I am currently in the room awaiting my results – we were told to stay in our cabins for two hours after the test to get results.  I have about a half hour to go.  Live now at 9:22 AM in Cabin 1045.

At 10 AM, I called the Med Center and I asked them about the results, and they said positive results had already been communicated so that I was NEGATIVE.

I went to the Café Carinthia and ordered decaf mocha skinny latte to go along with another cup of ice plus a really good chocolate donut. 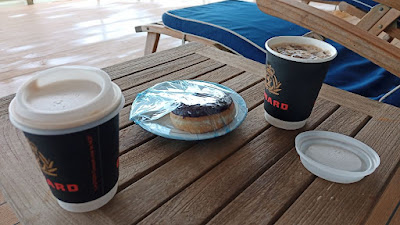 I went outside for a while but it was hot on deck – a lot of the lounges were wet from overnight rain – and there was very little breeze across the deck.  I stayed long enough to finish my coffee and donut and headed back in.  I did notice that a lot of people were now wearing their masks on the open deck.  I don’t know if that’s significant – just an observation.

Took some pictures of the sea - gray but warm and sill peaceful. 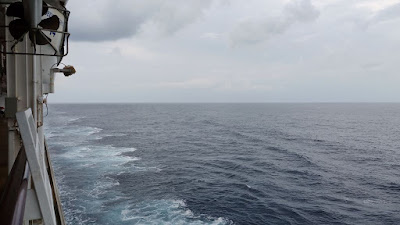 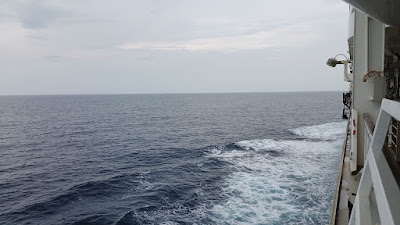 I ordered the Huevos Rancheros off the Brunch Room Service Menu and they turned out to be pretty good – two eggs plus sautéed onions and peppers. 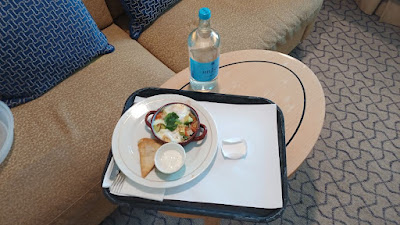 I forgot to ask for salt, which does not come with any of the food.  Two fried tortilla triangles finished off the meal.  I asked for ice water – the room service clerk asked me if I was in isolation and when I said yes, he said he would send up some mineral water.  Two huge bottles of water are now in my fridge.

I checked on Ellen who was waiting for her lunch to arrive (which it never did).  She told me that the Purser’s Desk had checked in on her.  She is about the same – she doesn’t get tested for at least five days.

I spent the afternoon in the cabin finishing “Diablo Mesa”.  The book was OK but as I have read so many Preston and Childs novels, it did feel familiar.  Some science, some Big Bads, etc.  It was a Nora Kelley novel and I haven’t read too many of those.

I went back outside to get some air on the deck and it is still warm out there but breezier and therefore, safer.  Still, too many people out there so I am back in the room now (4:30 PM). I started a new Spenser Novel, “Kickback” (no 43 in the series and written again by Ace Atkins).  Interesting, so far.

Getting meals to the room continues to be a challenge.  I spent over 30 minutes on hold with Room Service before we got disconnected and then was on hold with the Purser’s Office for a few minutes.  I waited a while and called again – Room Service was impossible and they kept playing the same song by “America” – “Ventura Highway” (“alligators in the air”) over and over again.  I called the Purser again and asked her to connect me to Room Service – she said she would take my order and send it to Room Service.  I ordered the Parpadelle Pasta, Cesar Salad, and Bramley Apple Pie for dessert.  It took a very long time to arrive but it did come.  The Cesar Salad was really good this time (maybe I was just really hungry) and the Pappardelle tasted too good to be true and that’s because it most likely had meat sauce (I could not get that confirmed by the Purser).

Treif but good.  The pie was OK – the ice cream had melted when the Room Service guy started his long journey to my room.

I went down to see the Purser because I was confused over the meal situation – close contacts (and COVID folks), on the second day, were supposed to order from the Restaurant Menu (according to a document handed out by the Medical Folks).  I had not seen any menus and was given no information as to how to contact someone to order meals.  The purser printed me out a dinner menu from Britannia and said that a breakfast menu would be sent to my room.  No menu came.  Tonight I am going to fill out the standard Room Service Breakfast menu and hang it outside my door.

By the time the food came, it was too late to really do anything.  The deck chairs are taken away after dinner so that’s not an option.  The TV reception was poor due to satellite signals so I did some more reading in my Spenser book.

Of course, I passed on tonight’s entertainer, Magician Nathaniel Rankin.  I don’t believe we have seen him before so that will have to wait.

I got an envelope shoved under my door telling me that I had to go to ConneXions 1 between 8 and 9 AM to get another antigen test.

I also noticed in the Programme that I am actually speaking tomorrow at 12:15 PM.  I was pretty sure that I wasn’t back on until Saturday (a few days from now).  I guess the critical thing is the test result tomorrow.