Today, since I have completed 10 days of isolation since my positive test on May 28, 2022, we are cleared to travel.

We had breakfast in the 2800 Restaurant – Belgian Waffles with Strawberries and Bananas (this time) and Ellen had the Avocado Toast.

We are all packed – it was relatively easy since we wore the same clothes the entire time in the Hotel.

We had lunch in the restaurant – they only had one tuna sandwich left (supporting the hypothesis that the tuna was indeed purchased for us) and Ellen had that to go (she ate her avocado toast for lunch) and I had my final Beyond Burger.  I don’t know where they get their Beyond Burger but it is perfectly prepared – I ate the whole thing.  We have not been ordering fries since we get a pound of fries.  The tuna will be dinner at the airport.

Our driver arrived early for our 1:20 PM ride to LAX.  He showed up in an Escalade SUV (he said the ride was $100). We checked out and chatted briefly with the desk staff – I also thanked the waiters for their help during our confinement.

The ride to LAX on the Harbor Freeway (110 Highway) took about 30 minutes.  The AA app said we needed to go to Terminal 4 but our driver insisted that it was Terminal 5.  I told him that we would get off at T-4 and it turned out to be the correct place.  Check in at the kiosk was quick and we left our bags at the Bag Drop.  We went upstairs to the TSA Checkpoint and were met with a backup.  Don’t know why but after several minutes we started to move.  I suspect that some folks were slow in getting their bags on to the conveyor belts to the X-Ray scanners (initial rodeo syndrome).  FYI – not a lot of mask wearing – I am wearing mine.

Our gate – 47B – wasn’t that far away and we had about two hours until our 4PM boarding time.  I decided to get an iced coffee at Dunkin and it cost $5.96 (they charged $0.99 for the mocha squirt).  That’s three times what I pay for the same drink back home.  And the irony was that the drink wasn’t very good – only drank half of it.  Pricier than ORD.

Our flight, AA2276 arrived from Chicago (I couldn’t see it from the gate).  About 50 percent masks at our gate.  We boarded a few minutes late because the flight had come in a bit late.  We are in 16E and 16F – Exit Row – middle and window.  I don’t usually get these seats but they were comfortable and I could actually look out the window (I was in the middle).  The woman on the aisle worked the entire flight and she was average size so everyone had their space.  I could get out easily (only had to do that two or three times on this flight).

Boarding took a long time – some people were confused about where their seats were and some people hauled a huge roller board on to the plane late in the process and then had no place to put it.  The flight attendants on this flight did not appear to be as helpful in getting those overheads filled and closed.  We pushed late – in fact, a first class passenger was in the bathroom when we started to push back.

The flight itself was uneventful – couldn't see anything on takeoff because the marine layer was thick; it was nice, however, to able to see able to look out the window on this flight.  Usually, we are aisle across and the person at the window has the shade down the whole flight. 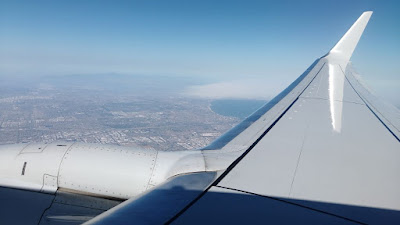 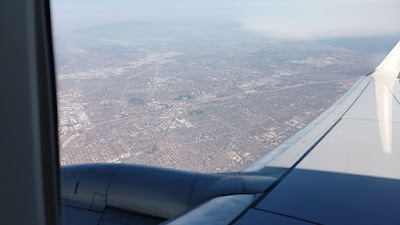 We had the tuna sandwich for lunch and it was great – I had decaf coffee (easier on the throat) with the sandwich.

Flight time was 3 hours 30 minutes (I watched the Women’ Softball Series on the AA app).  We got into Chicago around 10:30PM.  Our bags came off the carousel quickly but I had already tried to schedule an American Taxi.  The app told me that there were no cabs at ORD and I should try again at 1:30 AM – WHAT?  I called 303 and used phone prompts to set up a taxi – we were lucky to find one – Taxi #8973 was at the airport. I called him and he said he would be there in a few minutes – another call and he would be there in a minute and he WAS.  The ride was $45; when we left on this trip, the cab ride to ORD was $35; when I tried to schedule with American Taxi, the quote was $40 and now it was $45.  Hard to debate fares when it is past midnight and you want to get home.

We did get home and discovered that our mail from the last three weeks was not there.

We both survived our COVID experience and we were home – that was the important part.