Slept a little better – had the strangest dream – I was in a town where people just randomly smacked each other in the face.  I think what happening was that whenever I coughed in my sleep that was incorporated into the dream as a smack.  The mind is a crazy thing.

The ship is currently off the coast of Baja California. 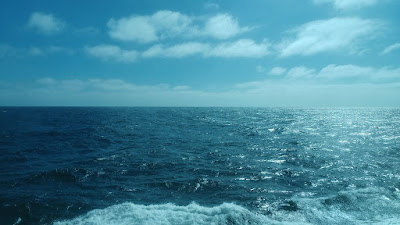 I slept until around 5 AM something but then went back to sleep until 6:45 AM. My breakfast, oatmeal w brown sugar, scrambled eggs, wheat toast with butter and marmalade.  All of the hot items were cold.  The guy delivering my meal knocked on my door and then retreated to a safe distance until I took the tray – other room service folks are not quite that cautious.

COVID Day 2 – still coughing – maybe not as much – tired – throat is sore due to the coughing. No aches or pains and I do not feel feverish.

I packed all of my clothes in one of the suitcases – not a pretty pack but everything is in there.

The day drags on – the seas are actually a little choppy out there and you can feel the ship move really for the first time on this cruise.

I ordered the Mediterranean Frittata off the brunch Room Service menu and it came pretty much around lunchtime. 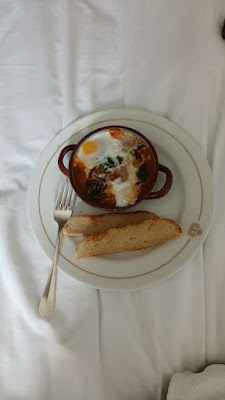 It was very similar to the Huevos Rancheros I had the other day – two poached eggs plus some cheese and sautéed veggies.  I couldn’t finish it.  I am getting very good and shoving the trays out into the hall with my feet.

I set my clocks back early (instead of right before bed) because that makes the transition easier – we were on a ship that changed clocks at 1 PM and it worked out a lot better.  We’ll see if this helps.

When the Med Center opening at 3 PM, Ellen called them to set up a recheck of her COVID test – they came and she came out to be NEGATIVE.  She thinks the sampling was a bit light and I can’t believe she got results in less than 15 minutes because it takes that long for the test to run.  I am suspicious about the test but she is probably going to be tested tomorrow.  If she clears that, she doesn’t have to isolate but it is a moot point as we are heading to an isolation hotel near the port of Los Angeles – I still have three more days until I can get retested.  That will no doubt happen at the hotel and we will probably have to run those tests ourselves.  I can’t see any Cunard folks hanging back to test people in the hotel.

Based on Ellen’s recommendation, I ordered the seared salmon with a bake potato and sour cream for dinner along with a standard Cesar Salad.  They said the meal would arrive around 7:30 PM.  Around 6:45 PM, Room Service brought me a Cesar Salad but no Salmon and a Diet Pepsi which I had not ordered.  I told the attendant that and she took note but I kept the Pepsi.  A few minutes later another Room Service person brought me another Cesar Salad and the Salmon as well. After I had finished that and shoved the trays into the hall, Room Service brought me another complete meal including another Diet Pepsi.  So three Cesar Salads, three seared salmon dinners (no baked potatoes however), and two Diet Pepsis was the final dinner score.  I wanted to tell the Purser that I was double charged for the Pepsis but couldn’t deal with the holding anymore.

I did find something to watch on TV - me giving my Richard III Lecture. 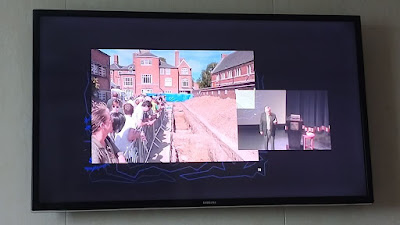 Ellen got the debark information sent to her room – I guess she is the official isolating person in our group.  She will be coming down to pack her clothes and other stuff.  Since we were both infected, we can stay in the same room (when I came up positive, they gave me the choice of going to her room).  Being double vaxxed and double boosted probably makes me a little less infectious than someone with less protection.  Besides, my symptoms are improving – no longer congested, coughing has abated, sinus pain is gone, and I don’t feel as wobbly as I did earlier.  The only remaining issue is a sore throat and that is from the coughing. Throat doesn’t hurt when I swallow. Not bringing up any phlegm now.

Personal Note: I know that Room Service has a big job since COVID joined the ship but the thing with the orders is baffling.  I’ve been following up with Room Service on my orders to make sure everything is down correctly and still multiple meals have been arriving.  Also, a crude calculation – since the COVID started, I have been spending 10 percent of my time on hold with either the purser or room service.  Resource allocation needs to be revisited.  And, I really hate “Ventura Highway” – the music for those on hold.

Ellen was escorted to my room by the fogger battalion.

She packed up her stuff pretty quickly and cleaned up my packing a bit.

It is nice to have her back.